The best rapper ever returns and scores with "Duets"

The Notorious B.I.G., also known as Christopher Wallace, gives a glimpse of what could have been in "Duets: The Final Chapter." The album is the only therapy left for Biggie fans who have already memorized all his songs.

Biggie's last album is titled "Duets" because each song is a collaboration with other artists. Many of the songs feature verses from Biggie's old songs remixed and laid down over new beats. 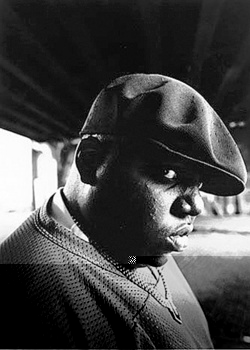 Photo: Biggie has remained a major influence in hip-hop even after his death.

Photo: Biggie has remained a major influence in hip-hop even after his death.

Speaking of the beats, Diddy, one of Biggie's closest friends in the hip-hop industry during his lifetime, produces the majority of the tracks. The innovative beats complement both the laid back vocals of Biggie and the wide varieties of flow by the artists featured.

'The Final Chapter' features appearances from an extensive list of top-quality artists. The vocals of Jazzy Pha, Jagged Edge, Mary J. Blige, Akon and others bless the mic while the gangster flows of Juelz Santana, Ludacris, Nas, Jay-Z, Big Pun, Fat Joe and The Game try to rap well enough so that Biggie won't overshadow them. There are not many rappers who can match the flow and style of Biggie, but one rapper who is on the same lyrical level as Biggie is the late Tupac Shakur.

It is widely accepted by hip hop fans that Biggie and Tupac, another rapper whose life was claimed by gun violence, are the best two rappers ever. By including Tupac's flow in Biggie's song, "Living in Pain," Diddy successfully produces an instant classic track.

As a gangster rapper, Biggie had to include some songs with gangster issues on his last album. One of his best tracks on `The Final Chapter' is "Beef," a song about violence within the rap game. Vocals by Notorious and G-Unit's Mobb Deep are complemented by Diddy's line of "you don't know what beef is," and the product is one of the hottest songs on 'Duets.' Biggie raps about the threat of starting a beef with him, furthering his image as a big man capable of violence.

Another notable track is "Hold Ya Head," which features a reggae sample from the late Bob Marley, the greatest reggae artist of all time. This song also has some irony in its subject as B.I.G. raps about how people would react if he committed suicide. He says, "My baby mama kissed me but she glad I'm gone/She knew me and her sister had something goin' on/I wonder if I died would tears come to her eyes/forgive me for my disrespect forgive me for my lies."

'The Final Chapter' cements Biggie's place as king of the rap game and adds to the legend of a great rapper no longer with us. 'Duets' enters the charts the same way Biggie left it, with a bang.