Bike sharing programs are fun, efficient ways to commute or tour a city

Many big cities today face problems such as traffic and pollution. Across the world, these cities have found an exciting yet simple idea to fix those problems: bicycle sharing programs, which have been popular for a number of years now. 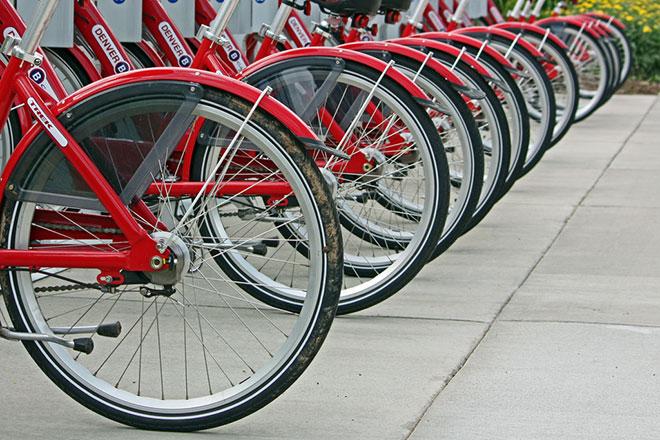 Photo: Bike sharing companies in D.C. and across the globe are becoming huge hits.

Photo: Bike sharing companies in D.C. and across the globe are becoming huge hits.

In bike sharing, commuters and tourists alike can conveniently pick up a bike for a small fee and ride it to their destination, where they return the bike. The idea originated in Europe in the mid-2000s and quickly blew up around the globe. Today more than 600 cities have bike sharing programs. In the United States, cities including D.C., San Francisco, and Minneapolis have seen the most success in their bike sharing programs.

In major cities rush-hour traffic can be awful, leaving commuters sitting for hours in bumper-to-bumper traffic that seems more like parking lots. And parking lots in a major city? They're not easy to come by, usually leaving commuters and tourists with an open lot that isn't anywhere near where they want to go, and having to pay $10 for it.

Bike sharing is helping commuters and tourists alike. With many stations located across these cities, people can easily pick up a bike and ride it to their destination in a shorter amount of time than it might have taken them to drive. On top of that, people who bike get a workout built-in to their schedule going to work and coming home. For tourists, biking around the city can be a fun, unique and personal way to see a city.

Numerous Blair students bike to school as well, including Junior Sam Bilsky. Bilsky is forced to get himself home after school, as his school bus only comes in the morning. "I bike to school about twice a week, and I enjoy doing it because it's a good way to start the day," Bilsky said. "The Ride-On bus takes too long, it's too crowded, and it comes at different times every day," Bilsky added, who said that biking saves him about twenty minutes every day.

D.C.'s Capital Bikeshare is arguably the most successful bike sharing program in the U.S. Recently the company expanded their number of stations and fleet of bicycles into neighboring suburbs on both the Maryland and Virginia side of the city. Now one can pick up a bike right on Ellsworth St. in Silver Spring and ride as far into D.C. as they desire. The cost is inexpensive as well. For a 24-hour membership, a membership specifically targeted at tourists, the cost is $7. For more permanent residents, monthly memberships cost $25, and annual memberships cost $75 dollars.

Not only in D.C., but across the world, the bikes are one of the fastest, healthiest and cheapest commutes. But the bike sharing programs aren't just benefiting the people, they're benefiting these cities as a whole. They're taking cars off the road, which is helping traffic and helping to reduce carbon emissions.

While the bikes benefit the people and the city, they're also benefiting someone's pockets. Ownership of bike sharing systems is very different from city to city. Here in D.C., Capital Bikeshare is fully funded by the District's Department of Transportation. In other cities, private companies sponsor and manage the bikes, such as New York's Citi Bikes, or Seattle's new program, which is sponsored by Alaska Airlines.

These programs have sprouted in popularity over the past few years, but managing a bike share program is no cake-walk. For one, some bike sharing systems had a lot of trouble getting people to actually use the bikes. In New York, Citi Bikes took a long journey. In its first fall, many bikes were damaged by Hurricane Sandy. The next winter, many bikes went unused because of the unusually harsh weather. On top of that, many New Yorkers were simply skeptical of the bike sharing concept as a whole. After the passing of time changed New Yorkers' attitudes, Citi Bike is now the largest bike sharing company in the U.S.

Another hardship of these programs is keeping the stations stocked with bikes. When Capital Bikeshare launched in 2010, it began with one van moving 300 bikes per day between 100 stations. Today, there are 6 vans moving bikes from full stations to empty stations in and out of the District of Columbia. The bikes need regular maintenance as well.

While it's no simple task to run a bike sharing program, they are paying off for most cities. They make commuters trips shorter and healthier, and they keep tourists' trips cheaper. Look outside right now. Who wouldn't want to take a bike ride around the National Mall?