According to the Council for Textile Recycling, the average American trashes 70 pounds of clothing and textiles every year. The National Retail Federation reports that holiday sales represent about 20 percent of annual retail sales, even reaching 30 percent for some retailers— especially during the four-day weekend between Black Friday and Cyber Monday. As the busiest shopping day of the year, Black Friday takes the throne for environmental cost.

Black Friday capitalizes on the "fear of missing out," or FOMO, by urging shoppers to act fast and catch the deals. However, in chasing the tip of the iceberg, they forget the emissions-intensive production, waste-abundant packaging and destructive delivery that bubbles beneath the surface— think plastic bags from Urban Outfitters, plastic product packaging for new hair clips, packing peanuts and more. 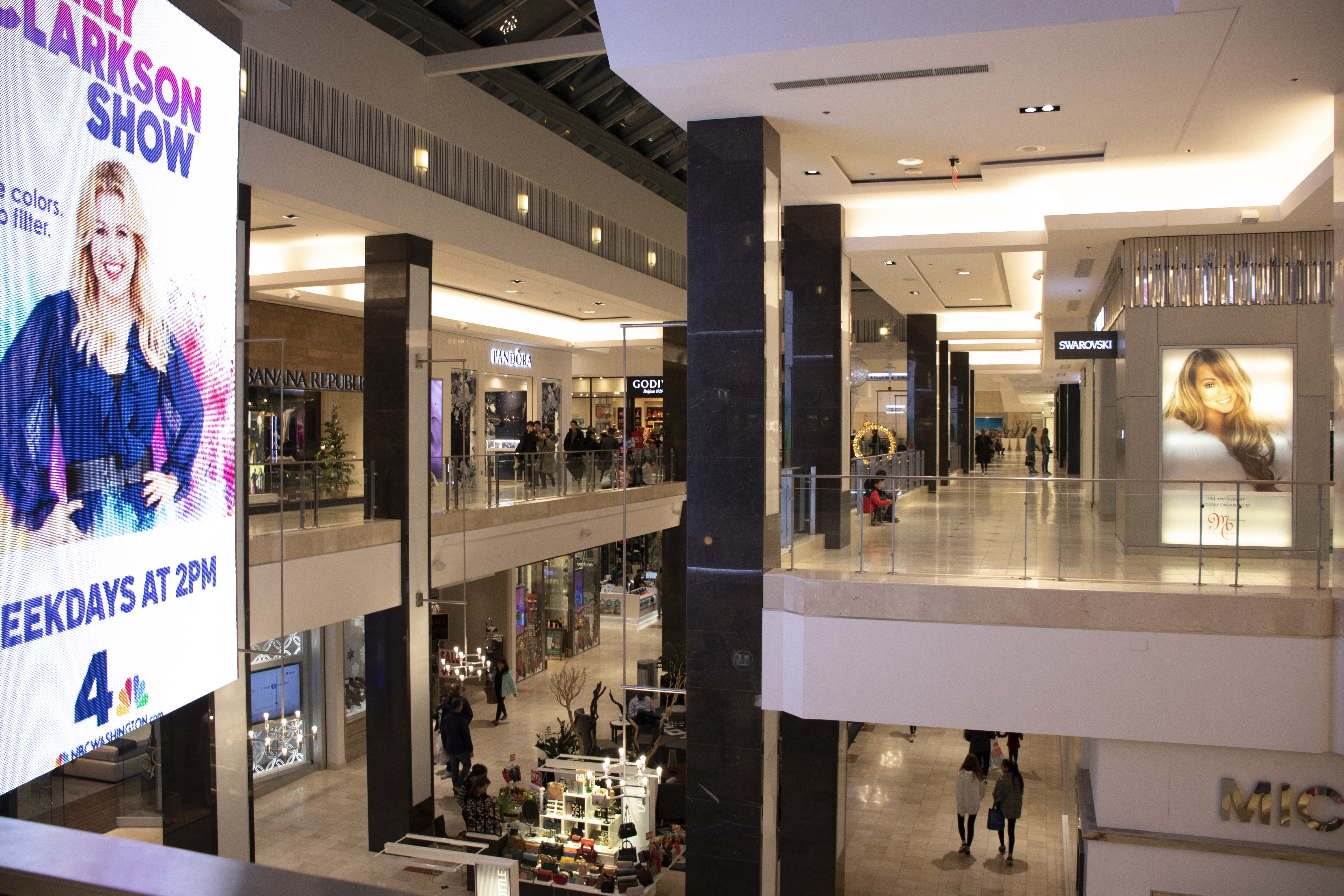 Photo: Montgomery Mall gears up for Black Friday, which in reality begins on Thanksgiving at 6 p.m. (courtesy of Catherine Lo).

Photo: Montgomery Mall gears up for Black Friday, which in reality begins on Thanksgiving at 6 p.m. (courtesy of Catherine Lo).

Online shoppers drastically drive up the number of trucks on the road and the number of stops each has to make, with transportation now the leading cause of greenhouse gas emissions. An analysis conducted by the Climate Lab found that expedited shipping intensifies the environmental impact because distributors have less time to fill trucks fully and bundle packages, instead sending out an excess of half-empty trucks.

Beyond the environmental impact of production and distribution, disposable products have a brief lifespan. Once the item serves its seasonal trend, they have nowhere to go except the waste bin. "Half of this stuff [from Black Friday] is thrown away by Christmas," junior Maddie Graham says. "You don't need it."

The fast fashion industry reigns when it comes to disposability, characterized by dirt-cheap prices and endless consumption. It's not magic: these low price points are fueled by workers without rights and synthetic fibers that end up in our waste streams. Companies deliberately plan for quick trend changes throughout the season, leading to items that are only made to last for a few wears before falling apart. Thus, textile production generates 1.2 billion tons of carbon dioxide annually, and discarded clothing bumps the figure up to 3.3 billion tons— roughly 8 percent of total global carbon emissions.

Junior Katrina Warren decided to boycott fast fashion brands three years ago after discussing the factory working conditions with her family. "In reality, the reason they're so cheap is because girls are working in sweatshops in other parts of the world for barely any money," Warren says. "Yes, style is important to me, but not at that cost."

Boycotting Black Friday doesn't force fashion fanatics to kick style to the curb. Instead of items from Forever 21 and H&M, Graham and Warren invest in pre-loved pieces and unique finds at thrift shops. Graham mentions that thrifting easily infinitely increases the lifetime of clothing items through a continuous cycle of buying and donating. When she no longer wants a piece of clothing, she donates it back to the thrift shop and picks out something new.

Graham also nods to sustainable brands such as Reformation and Alternative Apparel but acknowledges that they're not economically accessible to everyone. "There are sustainable clothing shops but they're really expensive," she says. "However, thrifting is really accessible and you find some cool stuff while helping out the environment."

Warren makes clothes out of thrift finds using a sewing machine. "Either I'll go to the thrift store and find a really cool fabric to make a skirt or a dress, or I'll take a piece of clothing and tailor it to my taste or my size," she says.

Graham, president of Blair Green Club and organizer for Fridays For Future USA (FFFUSA), is preparing for the next major global strike that conveniently falls on Black Friday. While the international organization chose the date by chance, striking on this national holiday symbolizes more for American climate activists. "We're striking in the US particularly against consumer culture, throwaway culture, fast fashion— industries that are literally killing the earth," she says.

For Graham and other strikers, Black Friday is the height of regression from what they fight for each Friday. "It's a punch in the face to sustainability," Graham says. "All the industries that don't care about their environmental impact as long as they can continue to turn a profit— they're raking it in on Black Friday and people celebrate that."

﻿Thankfully, corporate social responsibility is a growing trend among businesses, where environmental and social concerns are incorporated into a company's platform. In the past, Adidas has partnered with Parley for the Oceans and Stella McCartney to release recycled apparel, including athletic shoes made with upcycled marine plastic waste.

Sustainable brands are also taking direct action against Black Friday. Since 2015, REI has closed up shop, promoting consumers to #OptOutside and enjoy nature. This year, they've launched Opt to Act, a campaign dedicated to advocating for the environment. A Good Company, who's dedicated to developing sustainable everyday products, is participating in Green November, where they pledge to plant a tree for every $11.29 in sales in addition to their regular tree per order policy.

Even if companies won't adjust their practices for altruistic motives, Graham still advocates for adaptation as the next best solution. According to Graham, consumers are the drivers of change in our capitalist world. She points to Forever 21, a former global retail superpower now filing for bankruptcy as consumers began to realize its toll on the environment. "I really do think people vote with their wallets," Graham says. "If there is enough outreach from consumers, fast fashion will shift their ways."

"It's sink or swim," Graham says. "Either change or be left behind."