I usually spend my Thanksgiving enjoying a nice long dinner with my family and friends. But this year, I spent it standing in a line outside of Best Buy for no apparent reason (other than to save a few bucks). As much as I love Black Friday for having the best deals of the year, I hate what it does to America. Black Friday brainwashes Americans into obsessing over discounts and prices instead of the true spirit of Thanksgiving. 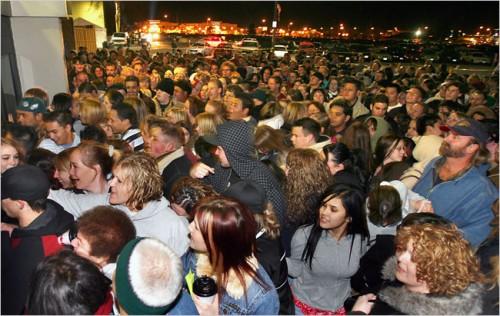 Photo: A big crowd lining outside a store for Black Friday.

Photo: A big crowd lining outside a store for Black Friday.

All across America, retail stores began their Black Friday sales early to compete with the profitable high demand they have had in previous years. Retail giants such as Kmart and Wal-Mart started their sales on Thursday at 10 p.m. and other retailers such as Target, Best Buy, Macy's and Kohl's opened up at exactly midnight. Toys "R" Us took the lead, starting Black Friday at 9 p.m. on Thursday. There were also plenty of other smaller chains that mimicked larger retailers with the idea that whichever store opened earlier would secure a larger percentage of consumers.

People are always looking for great deals to exploit and I am not surprised that there was a bigger turnout of shoppers this year compared to last year. However, we have to draw the line at some point - and that point should be midnight. In the previous years, Black Friday started at 12 a.m., the transition point in which Thanksgiving officially ends and a new day begins.

This year's Black Friday infringes on Thanksgiving, a time that should be spent happily with family and friends and not quarreling over what time we should go to the mall. Starting Black Friday earlier is also a terrible decision from a competitive standpoint because it encourages retail stores to open even earlier next year. If Toys "R" Us opens at 7 p.m. on Thursday, what is to stop other retailers from starting at that time as well? Eventually, opening earlier might not give anyone an advantage because stores can always match each other's opening times.