Sequel is everything a gamer could pray for

The stunningly innovative sequel to the critically acclaimed "Black & White" once again puts you among the higher powers. As a god, you are given a civilization and a choice: will you be good or evil? Black or white?

The graphics are stunning, the interface is easy and the game totally revamped.

The premise of the game is that you, as a god, have to raise your people from the ashes of an Aztec invasion to take revenge. You conquer nine lands in succession, using either your armies' force or the impressiveness of your cities to bring the surrounding peoples under your influence and undermine your opponent's power.

The two most important aspects of the game are your miracles (water, fire, lightning, meteor, heal and shield) and your avatar, a creature that represents you in the physical realm. It can build, entertain, gather and attack and will do so according to how it is raised. The creature, too, can be good or evil, and will change in appearance and behavior as a result. 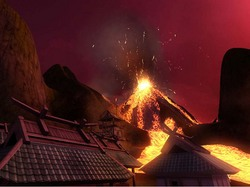 Photo: This Epic Miracle, volcano, rains down lava and burning ash on your enemy's villages.

Photo: This Epic Miracle, volcano, rains down lava and burning ash on your enemy's villages.

The changes made in "Black & White II" regarding these two essential aspects are rather far-reaching. You are limited to six miracles in this game, three good and three evil, and the resource miracles have been eliminated. Fortunately, it is much easier to get resources from the land itself, so the removal of these miracles has little effect on game play. Additionally, every miracle now has two modes: sprinkle and throw. For example, miracle fire can be rained down from the sky, slowly burning enemy troops, or it can be hurled at buildings in an explosive climax.

In addition to the six common miracles, four Epic Miracles have been added. Now, wonders (which are no longer specific to each tribe) grant you one of these miracles. A single use of one of these miracles can devastate an entire city, keeping tensions high throughout the game. These, along with armies, are the most exciting additions to the game.

Armies are another important addition to the "Black & White" saga. Gods can marshall troops into platoons of ranged or melee fighters. These forces can be used to subjugate surrounding towns or just defend your own. While platoons are active, they drain extra resources in exchange for the protection they provide. As you progress through the nine lands, armies become an increasingly integral part of the game.

In "Black & White II" the avatar is smarter, easier to deal with and far more helpful. They grow much faster so they are far more impressive. They ask you questions and act according to your response. The creature no longer needs to be doted upon hand and foot, as in the original game. Now they hop when you holler and skip when you shout without a question asked. 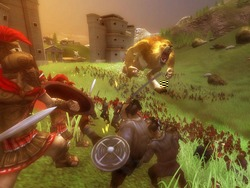 Photo: Opposing gods can engage both their armies and creatures in epic battles for control of the land.

Photo: Opposing gods can engage both their armies and creatures in epic battles for control of the land.

New buildings, people, terrain and creatures are rendered in the best graphics of any recent computer game release. The individual hairs on the animals stand out, and the water and sunset look like they could have been taken straight out of a professional photograph. The downside to this is that the game requires a fairly new graphics card and a fast computer to run well.

Ever since the award-winning "Black & White" hit the shelves, Lionhead Studios president Peter Molyneux and new co-developer Ron Millar have been working to improve upon the first game.

The two sat down, made a list of everything they didn't like about the original "Black & White" and set out on a four year journey to redesign the game. After just minutes of playing the game, it is evident that the two have accomplished their mission.

As a result of their efforts, there are very few downsides to the game, most of which entail the lack of a multiplayer option and the aforementioned astronomical system requirements (see this page for exact requirements). The rest of the game, however, is nearly flawless and will keep you riveted to the screen for hours and hours.