Out-of-school department at root of issue

School air conditioning problems resulting in multiple teacher complaints have occurred because of the times when the Energy Management Unit (EMU) in Rockville activates and shuts down the system in the mornings and afternoons, according to Blair's business manager James Funk. 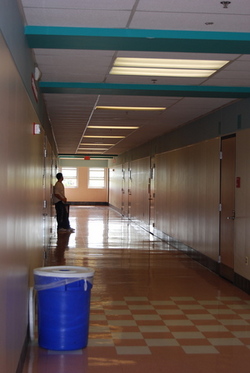 Funk says that the air conditioning problems at Blair exist because the EMU does not start the system early enough and shuts it down too early. "The school is not adequately cooled in the morning and heats back up in the evening," he said.

Every month, the EMU receives schedules from 170 to 175 Montgomery County schools that give that school's after-school activity times. They then use this information to determine the shut-off time for the air conditioning system. Schools also provide their own input as to the activation time for the air-conditioning.

Earlier this year, suggestions that the Heating and Ventilation and Air Conditioning (HVAC) system was at the root of the problem surfaced, but Funk said that the problem had nothing to do with Blair's HVAC. "We have limited availability to control the air-conditioning in this building," he said. "The Energy Management Unit has their own policy for controlling cost versus comfort."