1999 graduate Niels Hoven featured on show "Beauty and the Geek"

Niels Hoven, a 1999 graduate of the Blair Magnet program, was eliminated from CW's "Beauty and the Geek" on Feb. 7. Hoven and partner Jennylee Berns, an Ultimate Fighting Championship ring girl and model, were the sixth team to be eliminated from the show's third season.

First aired in 2005, "Beauty in the Geek" pairs brainy men with gorgeous women and has the duos compete in a series of events that allow the "beauties" and "geeks" to learn from one another. During each episode, one team is eliminated, and at the finale, the team who "changes" the most wins $250,000. A graduate of the Magnet Program and Rice University's Electrical Engineering program, Hoven was one of the eight "geeks" on the show. 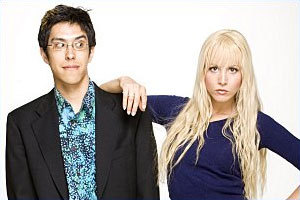 Hoven was accepted onto the show after interviewing with the casting crew. For the interview, which can now be seen on the CW web site, he donned a white polypropylene body suit and talked about his difficulties approaching attractive women. It worked " and the CW accepted him as a contestant. "Out of 25,000 applicants, I was chosen as one of the 8 geekiest guys in the United States of America," he said. "All you can do is laugh about that."

Currently, Hoven works as a dating coach with the self-help company "Art of Attraction," which teaches people to become the "attractive versions" of themselves, as Hoven writes on his blog, a job that his Blair friends find "hilarious."

His passion for self-improvement began after a friend helped him realize that he was focusing energy on his degree and career at the expense of his social life. He took seminars with the dating company and self-help company "Art of Attraction," began interning there, and eventually got a job with them. Along the way came "Beauty and the Geek," which he said "was a perfect fit" as he was "already interested in self improvement and actively learning to become more comfortable in social situations."

This November, Hoven formally dropped out of his Ph.D. program in Electrical Engineering at the University of California, Berkeley. Though he enjoys his current occupation as a dating coach, Hoven sees something different in his future. "I think there's a good chance I'll return to a tech-oriented job someday," he said.

Hoven, who never went on a date in high school, cites his time at Blair as years that helped him push himself and become more "book smart." During his four years in the Magnet, he was a Presidential Scholar nominee and a National Advanced Placement Scholar who earned perfect SAT scores. "My time in the Blair Magnet taught me to push my own limits," he said. "It also made me a big geek."

To get more information on the "Beauty and the Geek" and watch Hoven's casting interview, visit the CW web site.