Many faces, both old and new, could be seen at the 80th anniversary alumni basketball game. The game, played by Blair's basketball champions from years past, acted as an opportunity for Blair alumni to reconnect with each other. 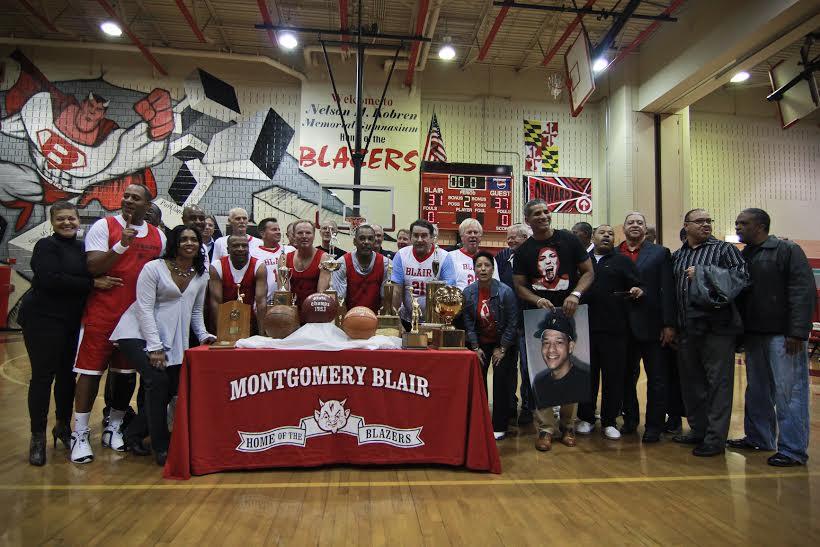 Photo: Both teams standing around their championship trophies.

Photo: Both teams standing around their championship trophies.

The two teams, red and white, were made up of state winning players from as early as the 1960s. The game began with the white team taking the lead, forcing the red team to spend the remainder of the game trying to steal it back. The crowd roared at every incredible shot scored by both teams' players, many of whom were nearing their 50s and 60s. Halftime brought a spirited cheer from Blair's Poms and a horde of family and friends snapping pictures of the players, who were called up to the center of the gymnasium to stand with their state championship trophies. The white team could not catch up during second quarter, ending the game with a score of 56-63. However, nobody was left in bad spirits; all the players stepped off the court sporting glowing expressions and reminiscing with their fellow alumni.

The event was regarded as a success by both its organizers and its attendees. "I absolutely loved the turnout of the game," principal Renay Johnson said. "People who went to Blair loved it, and it was nice seeing a lot of them here today." The alumni enjoyed spending time together at the event and, for some, seeing each other after years. "It was great meeting up with old teammates and friends," alum Ed Stewart (class of 1970) said. "They should have events like this more often!"

The spirit shown at the game was commended by the attendees. "Seeing the crowd cheering today made me very happy," alum Van Buren Vaughn (class of 1975) said. Alumni association president Mark Levin (class of 1966) was also pleased with the team's attitudes. "I think the Blair spirit is so alive with today's students," Levin said. "Their support today was so heartwarming."

The attendees agree that there was a sense of nostalgia lingering in the alumni. "I liked seeing the faces of the past athletes and students light up when they made baskets, or when they saw their friends," Johnson said. The alumni cited a feeling of camaraderie still present between them. "Once a Blazer, always a Blazer," Vaughn said. "We're like a big family."