Blair and Northwood: Round Two

Reviving the hostility after twenty years

Blair varsity boys finish off their soccer season tomorrow night against Northwood. The match-up is the first varsity soccer contest between the schools since Northwood reopened in 2004, and even though neither team will be making a run for the state championship this year, the game has been circled on calendars since the schedule was distributed during the summer.

Why? Consider what happened at the football game between the two schools on Sept. 14. The crowds of supporting fans from both schools were several times bigger than usual, and the students yelled with such intensity that it influenced the game. With under a minute remaining in the nail-biting contest, Northwood seized the lead for the first and final time, sending the Gladiator fans into a frenzy. An old rivalry that had gone dormant when Northwood High School closed for the first time in 1985 was back, as emotional as ever. 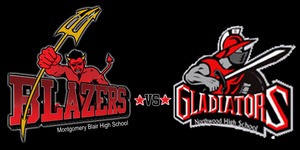 The Sept. 14 showdown between Blair and Northwood was particularly special because it was the first game played under the newly installed Northwood stadium lights since the high school reopened. This is the Gladiators' first year with a true varsity team, critical for any sports rivalry. But what made the game reach the level of a rivalry was that students at both schools put their hearts into it. Rivalries may focus on teams, but it is the fans that make them.

In 1956, Northwood opened as a junior-senior high school in Silver Spring. The school hung on to its seventh and eighth grade students for two years before becoming a regular four-year high school. Montgomery Blair, around since 1935, was then located near Wayne and Sligo Avenue, the present location of Silver Spring International Middle School.

In the forties, Blair had focused its sights on the sports teams of Bethesda-Chevy Chase, their closest opponent at the time. But with Northwood's arrival on the scene, the focus began to shift. Northwood's initial existence had come about for much the same reason it was reopened in 2004 – to lower the population of the overcrowded Blair.

This redistricting separated families in their school allegiance. The younger brothers and sisters of many Blair students became Northwood Indians – the school's mascot before it was deemed politically incorrect – thus winning a showdown between the schools became bragging rights redeemable at home. This sibling rivalry quickly turned the schools collectively against each other.

Steve Parker, a Northwood graduate of 1963, recalls the animosity. "We naturally hated Blair for beating us in sports, since our older brothers and sisters who had gone there would rub it in," Parker says. "That feeling permeated from year to year, keeping the Blair-Northwood rivalry at the top of the list."

At first, Blair beat Northwood in almost every sport. As a new school, the Indians had no foundation for a sports program, so Blair took advantage and pounded on their new rivals.

Despite the one-sided nature of the games, the stadium was always full. "Everyone went," Roxanne Fus, Blair's attendance secretary and a 1975 Northwood graduate, says. "It was what you did." Indeed, jocks in those days were just short of celebrities, and with games played at noon on Saturdays, no one missed out.

Louis Hoelman, who graduated from Blair in 1984 and is today a Blair teacher and softball coach, also remembers that a split between students from Eastern Middle School helped the hostility along. "Half my friends from Eastern went to Northwood, while the other half and I attended Blair," Hoelman says, who played baseball for the Blazers. "It made the rivalry because we knew who we were playing. Having a winning season meant beating them." Hoelman also played baseball in the Boys & Girls Club with kids who attended Northwood, which similarly added to the emotional stakes.

This rivalry stood out in the minds of those who attended Blair and Northwood so much so that when Northwood's graduating class of 1985 held their 20-year reunion in 2005, they scheduled it to coincide with the Northwood-Blair football game.

Now, with one school sporting a different mascot and the other with a new location, Blair and Northwood are rapidly reviving the once fierce rivalry between the schools, with all the same reasons for the original hostility. Northwood's reopening split families and friends, sports leagues acquaint the enemies and the schools are closer than ever – not to mention a history of resentment lingering in the air.

Blair's varsity boys' soccer team host the Gladiators for the Blazers' final regular season game and "Senior Night" tomorrow. Enmity will "fill the stands," Blazer captain Sergio Quisquinay predicts. While the Blair team will be looking for momentum as they enter the playoffs, everyone in the crowd will just be focused on the game at hand – beating Northwood is all that matters.