Blair athletics take a leap in the right direction

Sports in every season experienced more success than ever before in 2014-15.

There's a culture shift underway at Blair, and it's changing the student body for the better. The school year has officially ended, and there are definitely some fond athletic memories in every Blazer's mind. The Friday night football games, the 30 minute treks out to hockey games, basketball games, the deep playoff runs of the baseball and softball teams are just highlights of the tremendous success the athletic department experienced over the 2014-15 school year.

Over the past few years Blair athletics has rapidly transformed itself from the laughing stock of the county to one of the powerhouses in the area. Blair hasn't won a state championship in any sport in four decades, but each year our teams get closer and closer. This wave of success has created a new culture at Blair centered around the athletics, in which students support and rally their teams to success. And there's no better example than this year's athletic success. 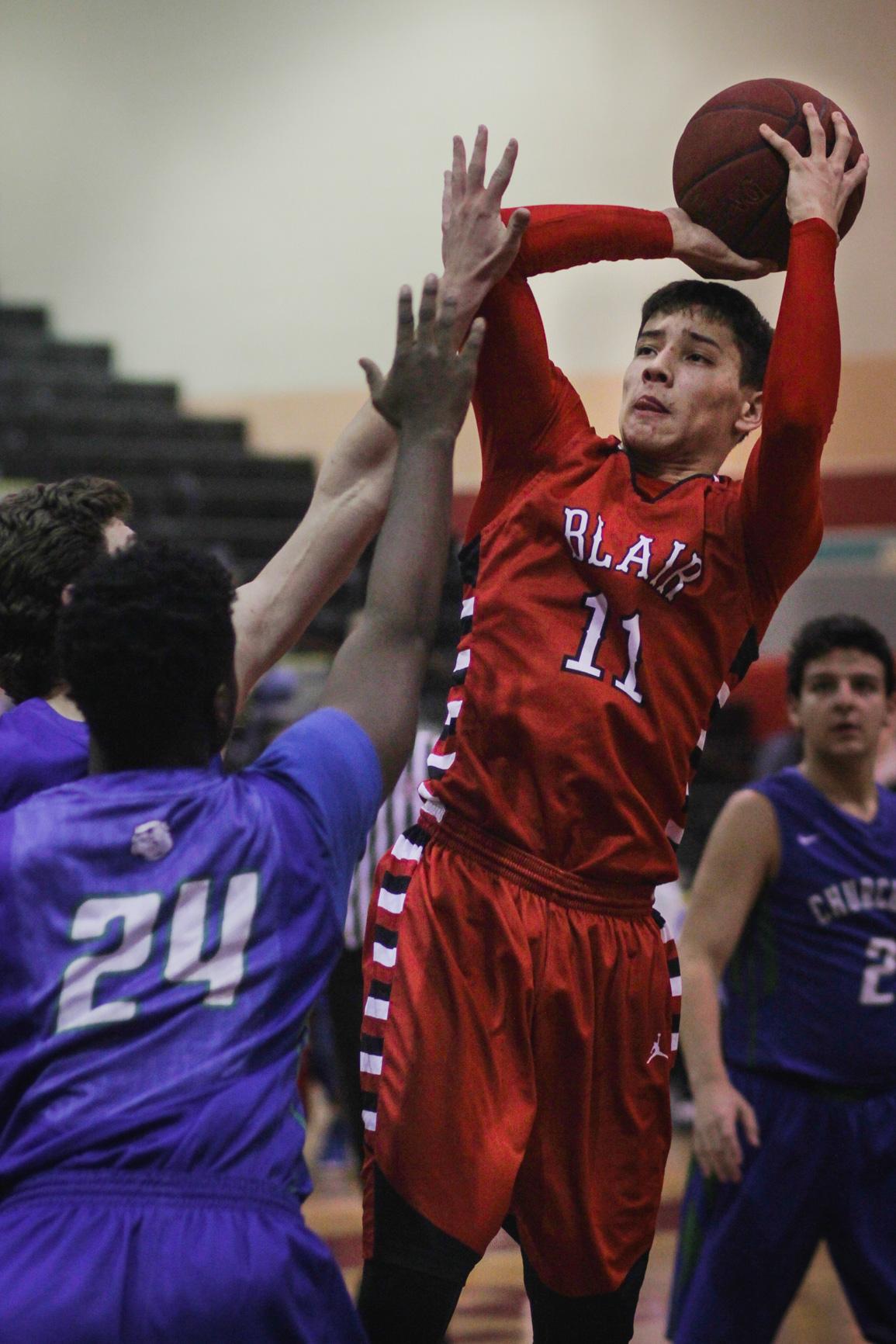 Photo: The boys' basketball team will turn to rising seniors such as Max Burke for success next season.

Photo: The boys' basketball team will turn to rising seniors such as Max Burke for success next season.  Photo courtesy of Ben Lickerman.

In the fall, the Blair football team made the playoffs for the first time in program history. The season was highlighted by a 41-0 road blowout of the rival Whitman Vikings, which drew the attention of players and coaches all around the county. The team didn't just come together at the right time, they became a family.
A large reason for their success on the football field was the coaches' methods of preparing the players behind the scenes. Athletic Director Rita Boulé is proud of the coaches and supports their unique way of preparing players. "They're different in how they organize the sport, prep the team, offseason workouts, summer programs, spring programs, there's a lot more organization and preparation there than ever before," she said.

But the football team wasn't the only team that exceeded expectations. The Boys' soccer team came out of nowhere to win their division. The team was led by a strong senior class that featured a lockdown defense and multiple offensive weapons. They sent a message to other schools around the county with tight games against Churchill, Walter Johnson, and Whitman. "They just really pulled it together at the right time," Boulé said.

In the winter, the boys' and girls' basketball teams both had slightly down years. However, both teams were competitive throughout the entire season and finished around the .500 mark. "I think we had a year where numbers are down, and the amount of experience of the kids on the teams is down, not in a bad way, it's just a year where you don't have tremendous numbers and you don't have a tremendous amount of experience," Boulé said.
"I think the coaches are working hard at the JV level to get kids ready for the varsity level, and I think the varsity teams are working hard to get kids playing as much as possible so that we can raise our level of play for next year," she added. 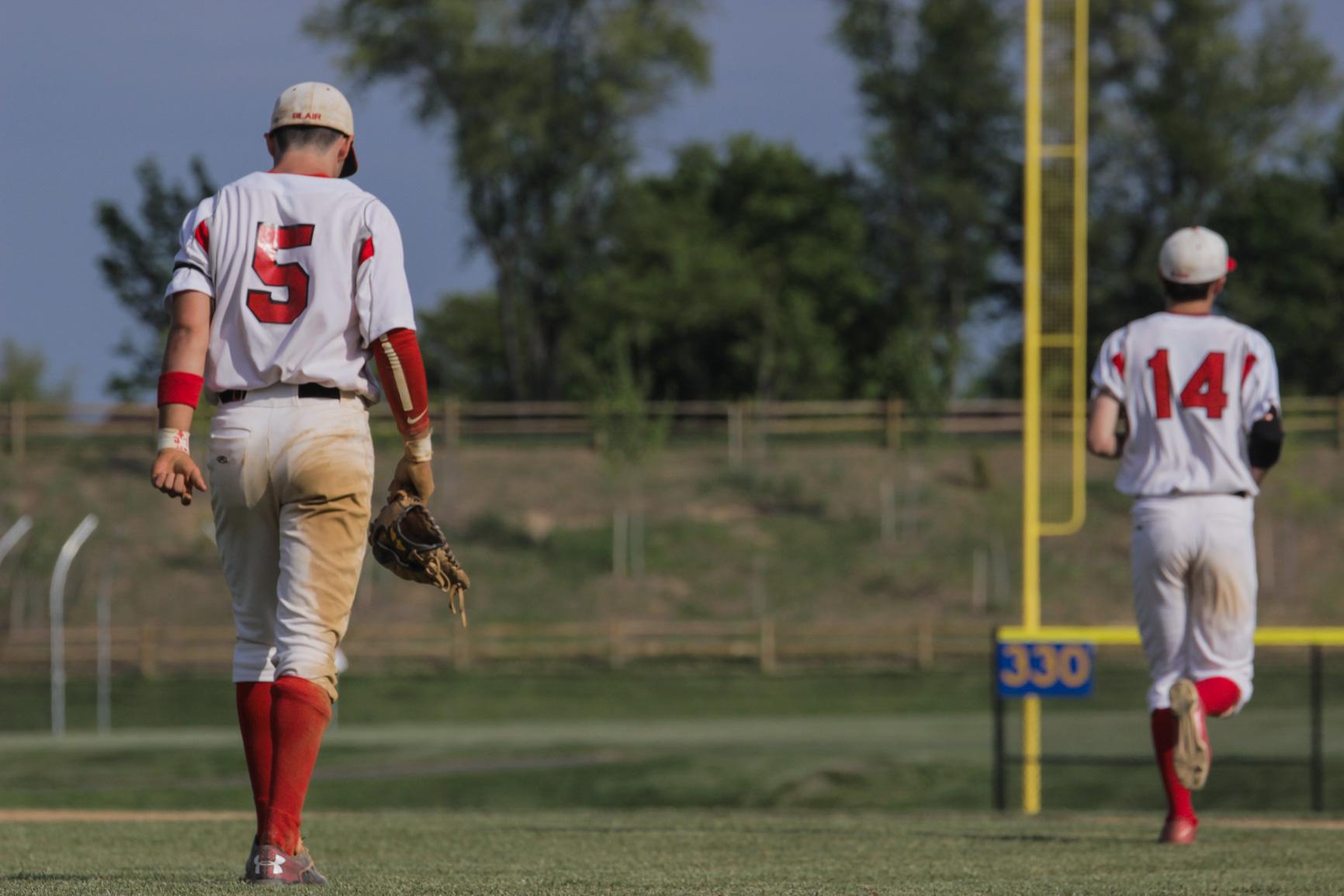 Photo: The baseball team went to their first regional championship in over twenty years this season, and will look to continue their success next year.

Photo: The baseball team went to their first regional championship in over twenty years this season, and will look to continue their success next year.  Photo courtesy of Ben Lickerman.

The basketball teams have reason to look forward to next season. Both returning starters Jared Williams and Camille Estrin have deadly jump shots that allow them to light up the scoreboard for both teams.
The Blair team that arguably had the most success was the hockey team. Even though the sport is considered a club sport, the hockey team managed to draw massive crowds at ice rinks over 30 minutes away as they breezed through the playoffs. The team fell just short of a Maryland state championship, but it was certainly a historic season.
In the spring, the baseball team continued their rise through the ranks of Maryland baseball, and the softball team continued to live up to their program's excellent standards. Thanks to the help of 11 seniors, the baseball team captured the division championship over rivals Whitman and B-CC, and went on to the Regional Championship game in which they lost to the eventual state champions of Gaithersburg. The softball team, made another deep playoff run to the regional championship game, and sported a very impressive 17-4 record.

"There's such a following, such a close family that goes back a decade or two for these programs, so I think kids that play [baseball and softball] get a sense of tradition and culture for those programs. So they already come in prepared, enthusiastic, committed and dedicated to those programs," Boulé said.

Each year in recent history the boys' lacrosse team's record has improved. This year they continued the trend as the boys' upset the first seeded Blake Bengals in the second round of the playoffs to cap off an impressive season.
Boulé was proud of both the boys' and girls' teams, "They're starting to create their own traditions. Girl's lacrosse has great traditions, they go back, they've been successful for a long time. It might've been a little down this year, but lacrosse at Blair is climbing it's getting better every year."

The 2014-2015 season was one for the history books of Blair athletics, as the teams continued to make strides in the right direction. Blair has earned its respect from the other county teams, and it's only a matter of time before a new state championship banner is rung up at Montgomery Blair.