On Tuesday, May 3, the Blazers secured a near-perfect win against the Northwood Gladiators, showing complete control over the field and scoring throughout the game.

The Blazers were at their best, not letting a Northwood runner past first base until the fourth inning. Senior pitcher Ben Respress kept the bases on lockdown, striking out two batters in both the first and second inning. When the Gladiators did manage to make contact, the Blair defense was ready, catching fly balls and converting groundouts.

Offensively, the Blazers were just as strong, taking advantage of errors made by the Northwood defense. The Blazers scored two runs in the first inning. Senior Logan Stillerman hit an RBI for Junior Jack Bevington, who added another run for Blair in the second inning after the Northwood pitcher threw too high and failed to force an out on first. 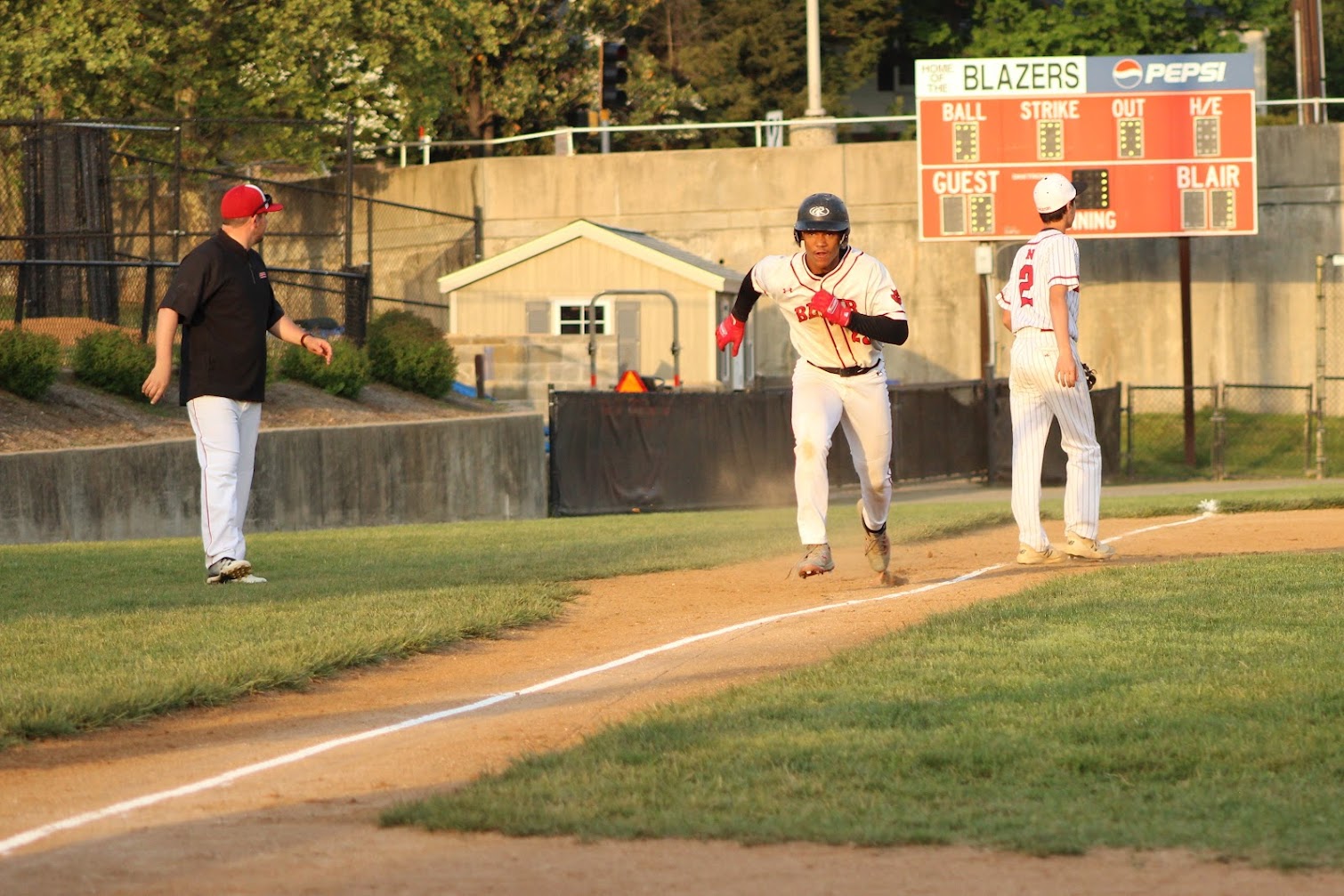 A determined run to home

Photo: Senior Alex Valdez runs to home base to score Blair's second run of the game.

In the third inning, the Blazers upped the scoring tempo, hitting line drives and advancing on sacrifice flies to score an impressive 5 runs. Many of the line drives were well placed, landing in open spaces in the outfield. Strong and well-placed hitting meant that Northwood had few opportunities to strike out or catch out any runners.

The Gladiators did manage to rally in the fourth inning, however, loading the bases as a result of multiple walks to first. A pitching error from Junior Sam Worley allowed a runner on third to get home, scoring Northwood’s first and only run of the game. Worley prevented another run by forcing out a runner on first base to end the inning.

Knowing that they were far ahead, the Blazers played confidently in the bottom of the fourth. Junior Kendall Anderson hit an RBI double for senior Andy Merrill. Kraft then scored again off a sacrifice fly to bring the score to 10-1.

By the top of the fifth inning, it became clear that the game would soon be over due to the mercy rule. This rule ends the game when one team is up by 10 or more runs two innings before the game normally ends. In high school baseball, games are seven innings, so the mercy rule takes effect at the start of the fifth inning. Because the Blazers were up by nine runs by the fifth, an early end to the game was possible if they kept up their performance.

Fortunately, the defense was able to prevent the Gladiators from scoring additional runs. Junior third baseman Evan Hunt and junior first baseman Ricky Reeves worked together and got two ground ball outs. Andy Merrill, who replaced Worley as the pitcher, struck out a Northwood batter to end their last chance at preventing the mercy rule.

In the bottom of the fifth, the Blazers maintained good hitting, loading the bases once more and finishing the game with a run off a bases-loaded walk by junior Jonas Laufer. The final score was 11-1.

Coach Kyle Wannen believed the senior night ceremony before the game inspired players to do their best. “We started off the right way by honoring our seniors, and I think we carried over that positivity and energy [to the game]”, Wannen said.

Senior Ben Respress believes the improvements the team made compared to previous games were due to a more confident mindset. “Going into this game we had the best energy we’ve had all year outside of the first game of the season”, Respress said.

The Blazers' next home game is this Friday, May 6 at 7 p.m. versus Quince Orchard. It will be the last home game of the season before the playoffs. The playoff schedule will be announced once seeding is finalized.

Gabe Prevots. Hi, I'm Gabe (he/him), a junior at Montgomery Blair High School. I enjoy biking and correcting minor mistakes in my stories. I think dogs are better than cats, probably because I have a dog. More »