The Blazers won, 72-63 earning their well-deserved first win of the season 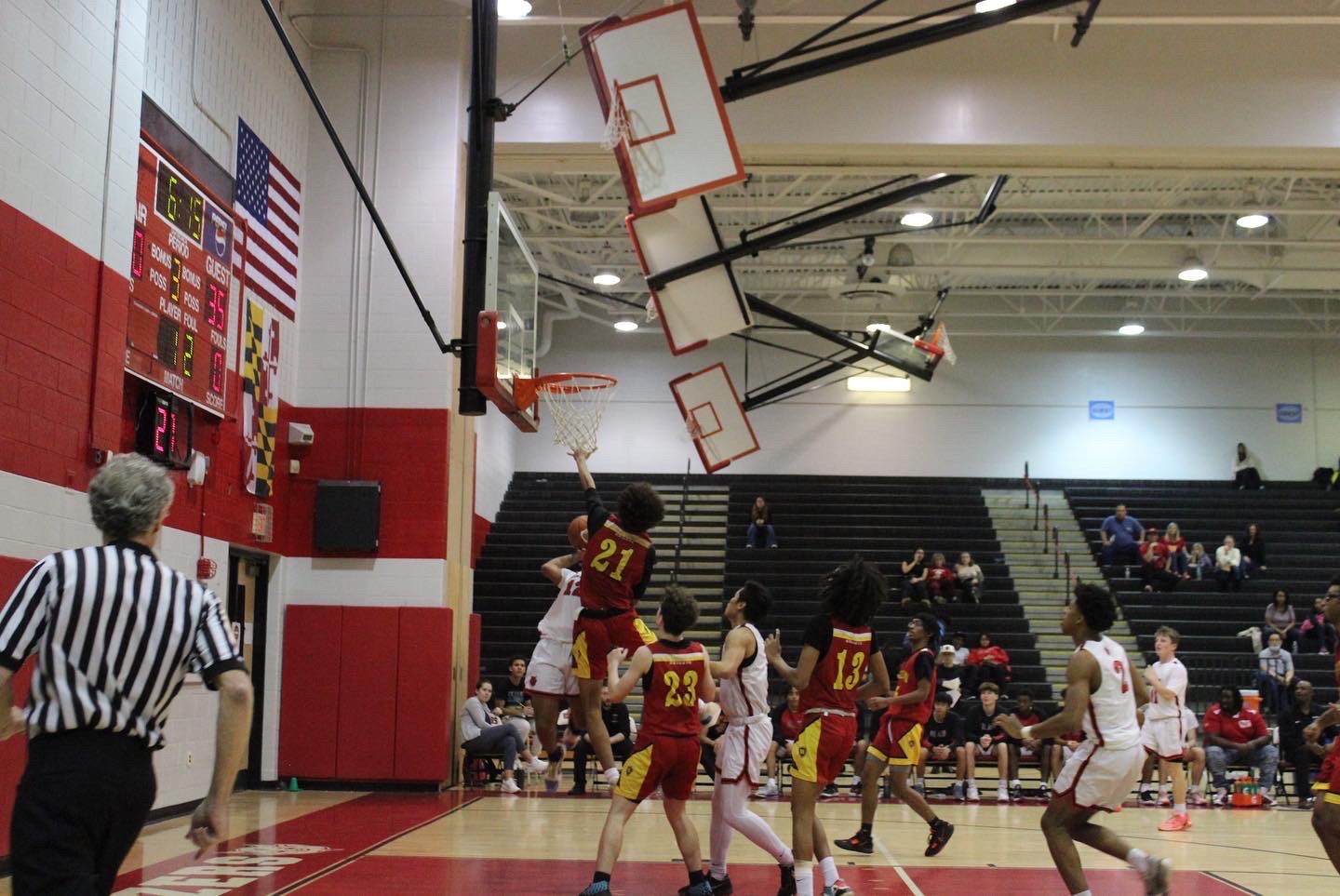 Going up for a shot

Photo: Senior forward Randy Reyes goes up for a layup against Wheaton.

Senior forward Randy Reyes goes up for a layup against Wheaton. Photo courtesy of Gabe Marra-Perrault.

From the start, the game was a tight battle between two evenly matched teams. Because of their similar offensive and defensive strategies, the score remained close as each team dashed with the ball back and forth across the court.

The Blazers' improvement from previous losses shined throughout the game, as they made more dynamic plays as a team, successfully followed through on their shots, and grabbed rebounds. By the end of the first quarter neither team had a definitive edge on the other, but things were looking up for Blair.

Senior guard Jonathan Pang continued to shine this season, and was accompanied by star senior guard Eli Greenberg, who was returning for his first game of the season after an ankle injury. Greenberg excelled, picking up assists and sinking multiple of his trademark threes. As a team, the Blazers were meshing well together, with obvious improvements in their passing play.

Despite great ball movement by the Wheaton Knights, the Blazers locked down on defense and converted opportunities on offense. The Blazers gained a tight lead halfway through the second quarter, but unfortunately the Knights continued to retaliate with well-executed plays of their own. The score flipped back and forth as the teams worked to gain a more comfortable lead on each other.

Junior Guard Logan Stillerman ended the first half on a high note by sinking a three, pushing Blair in the lead. The half ended 34-33 in favor of the Blazers, and while it was still uncertain which team would ultimately win, there were high hopes for the Blazers. 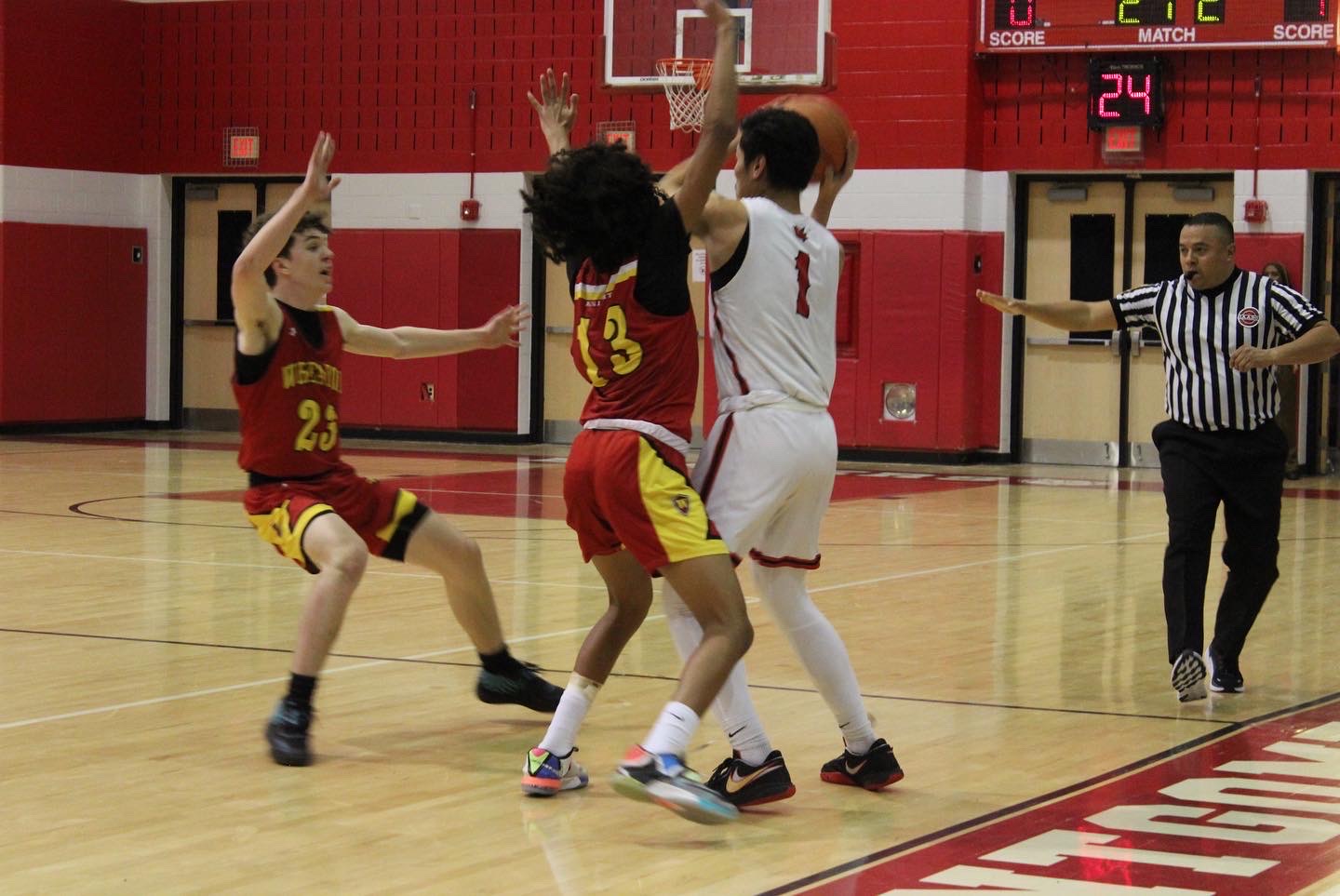 Looking for the open man

Photo: Senior guard Jonathan Pang looks for a pass while being double-teamed.

Senior guard Jonathan Pang looks for a pass while being double-teamed. Photo courtesy of Gabe Marra-Perrault.

After the halftime break the Blazers were back at it, with back to back buckets to begin the second half. Pang took control, leading the team with beautiful assists, such as one particularly elegant dime to a barely contested Stillerman who cashed in another three with 4:34 left in the third quarter. Patient plays and great ball movement kept the ball in the Blazers hands despite comeback efforts from the Knights' key players.

Senior forward Jibril Robinson scored 4 layups in just the third quarter, powering his way to the basket to get his way. The Knights managed to regain their lead for a short duration but after a vital timeout called by Blair head coach Tony Mensah the Blazers, led by senior guard Randy Reyes, swiftly regained their lead. Reyes slipped his way through the Knights defense and scored a smooth fadeaway jumper, followed by two free throws and another layup.

Reyes and his team weren’t just playing like offensive stars though - their defense forced numerous turnovers and even a backcourt violation. When the Blazers realized how much they had worn their opposition down they didn’t become complacent but instead turned up the heat.

Robinson outdid himself with another eight points in the fourth quarter and was accompanied by Greenberger and Reyes who both put up six. The Blazers ended the game with their highest scoring quarter yet at 23 points while they held the Knights to just 12.

Head coach Tony Mensah attributed the win to the confidence the team gained after winning the MoCo v MD tournament at St John’s Prep over winter break. “We won the tournament there… I felt like that was the turning point for us. The guys who are playing now have confidence and confidence I feel is the thing that was lacking the first six games,” he says.

You can check out SCO’s video highlight reel and photo galleries for the game here!

Blair's next home game is on Jan. 11 when they will take on Paint Branch.