Blair's bocce ball team won first place in the Montgomery County Bocce Championship at Sherwood High School on Feb. 12. They competed against five other teams in the county and will attend the state championship on March 3. Every team goes to states, regardless of their placement at counties. 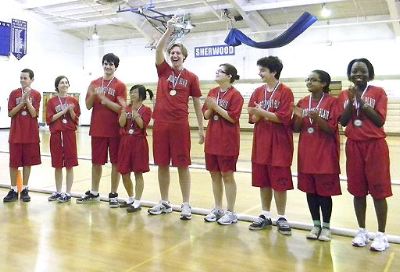 Photo: Blair's inaugural Bocce team won the first ever Unified Bocce County Championships. They will travel to states on March 3.

Photo: Blair's inaugural Bocce team won the first ever Unified Bocce County Championships. They will travel to states on March 3.

Earlier this year, Montgomery County Public Schools (MCPS) introduced bocce ball to six high schools as part of a corollary athletics program. The program is a result of MCPS' partnership with the Special Olympics in an effort to provide students who would not usually have the chance to participate in junior varsity or varsity teams due to physical and mental disabilities an interscholastic athletic opportunity. According to sophomore team member John Scott, however, Blair does not have any students on the team with special needs as other participating schools do.

Nine out of the 10 Blazers on the team went to the county championship, but only eight will play at States. Because Blair's team has no special needs players, they hope to reflect the attitude of having fun rather then that of winning. "It becomes more important to have a good time," senior member Rosalie Fischer said.

The county championship structure was a tournament with brackets, according to Fischer; Blair competed against Northwood and B-CC in the first and second rounds respectively, before taking on Sherwood in the final match. "I did expect us to go far because in the practices we played really well and we played well in games too," Scott said.

According to Fischer, the final frame against Sherwood was very intense. "The refs went and measured every single ball on the court and we definitely had the point," she said.

Players felt the win reinforced their initial reasons for joining the team. Scott joined the team because of previous experience he has had playing bocce with his family. "I thought it would be fun," Scott said.

Fischer had a similar intention, and joined after playing bocce during summer camp. "When I found out there was going to be a team at Blair I was excited to get involved," she said.

In the future, bocce ball sponsor John Haigh hopes to further promote the team at Blair. "I hope that the program spreads and more students get involved," Haigh said.