The Blazers win 84-75 against the Warriors

The Blair boys' varsity basketball team (6-1) defeated Sherwood (4-2) by a score of 84-75 in their fourth home game of the season on Thursday night. The game, originally scheduled for Jan. 7, was moved to Jan. 9.

After winning the tip-off, the Blazers scrambled to take the lead. A minute and 30 seconds into the game, junior guard Alfred Worrell made two consecutive free throws to kick off the game with Blair up 2-0. With baskets by senior forward Bakarr Bangura, senior guard Liam Olagbaju and junior guards Jacob Briggs, Michael Ayala and Worrell, the Blazers stayed in the lead. Towards the end of the quarter, the Warriors steadily caught up and ended the first quarter in a 16-16 tie. 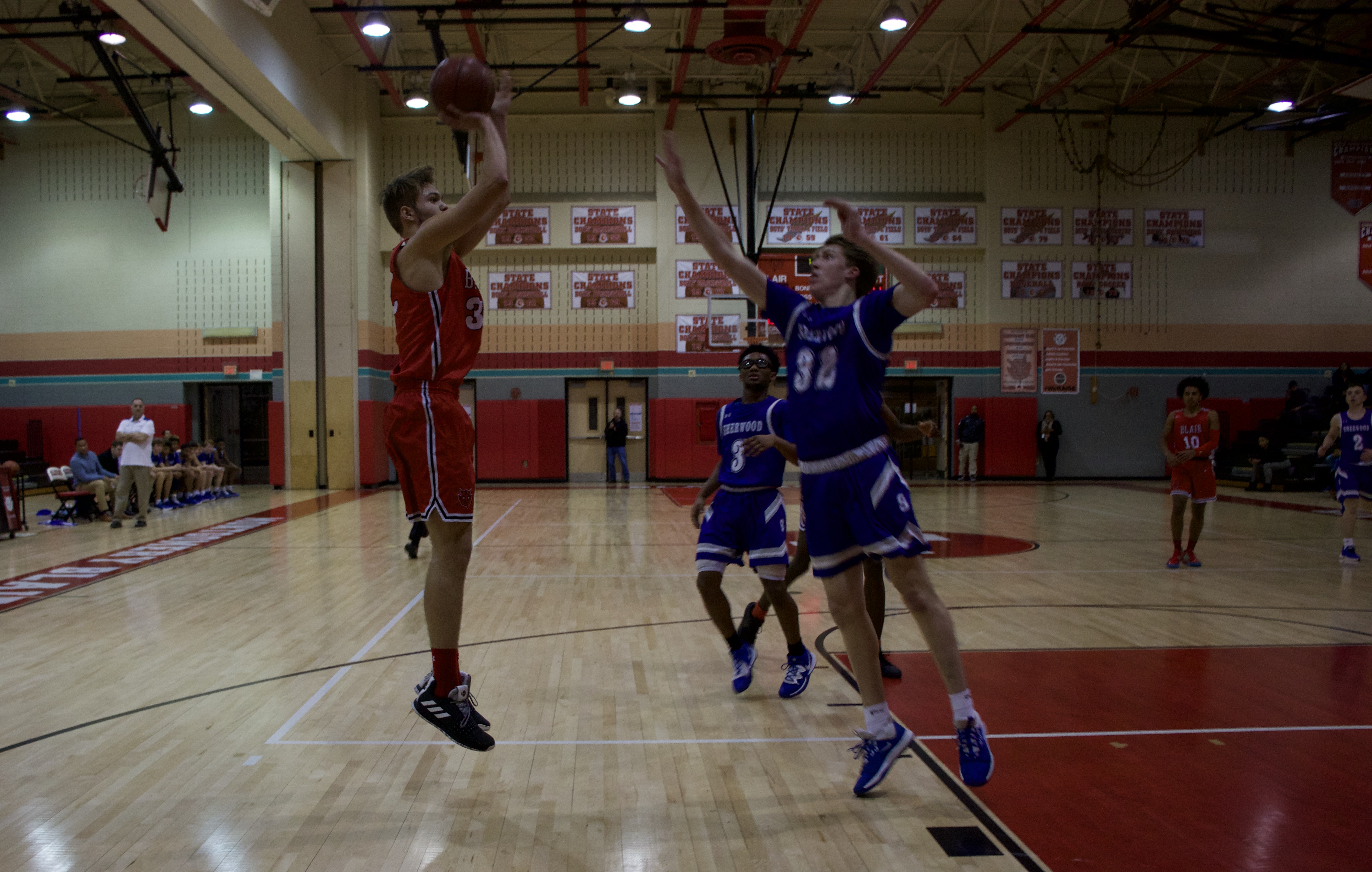 Eager to break the tie, both teams went at it for an intense second quarter. Blair briefly fell behind Sherwood for the first minute, but came springing back into action to bring the score to 26-19. Ayala played exceptionally, making multiple three-pointers and scoring 11 points in the quarter. Though the Blazers were in the lead, the score remained close throughout. Thanks to two successful free throws from Worrell, the second quarter ended with Blair up 41-32.

Coach Damon Pigrom took notice of the Blazers' successful moves. "I thought we played well in spurts. We got stops when we needed it," Pigrom said. Senior center Leon Johnson echoed this sentiment. "We had good breaks [and] we ran our offense better than any other game so far," Johnson said.

Starting the third quarter, Sherwood made a comeback, putting the Warriors in the lead 42-41. A three-pointer from Briggs, though, put the Blazers back in the lead with junior center Tommy Waltz-Chesnaye, Johnson, Bangura and Worrell helping to maintain the lead. The quarter came to an end, with a close score of 64-58.

The game reached its climax in the fourth quarter as Blair was winning by just six points. With only two and a quarter minutes left, Blair's victory was sure. The Warriors tried but failed to mount a comeback, and the Blazers held on to win 84-75.

Johnson said that the Blazers were playing against an experienced team but still managed to play well. "Overall, it was a pretty good game. We were up against a team that knew what they were doing," Johnson said. "[But] we went out there and got it done."

But Johnson pointed out that the team can still improve on its defense. "We still need to work on being in our spots defensively," Johnson said. Although the team is playing well so far, Pigrom has set higher standards. "The players have set some goals and in order to achieve them, there are things that we have to clean up," Pigrom said.

The Blazers will play their next home game on Monday, Jan. 13 against Kennedy at 7:15 p.m.