The Blazers fell 80-75 to the Blue Devils 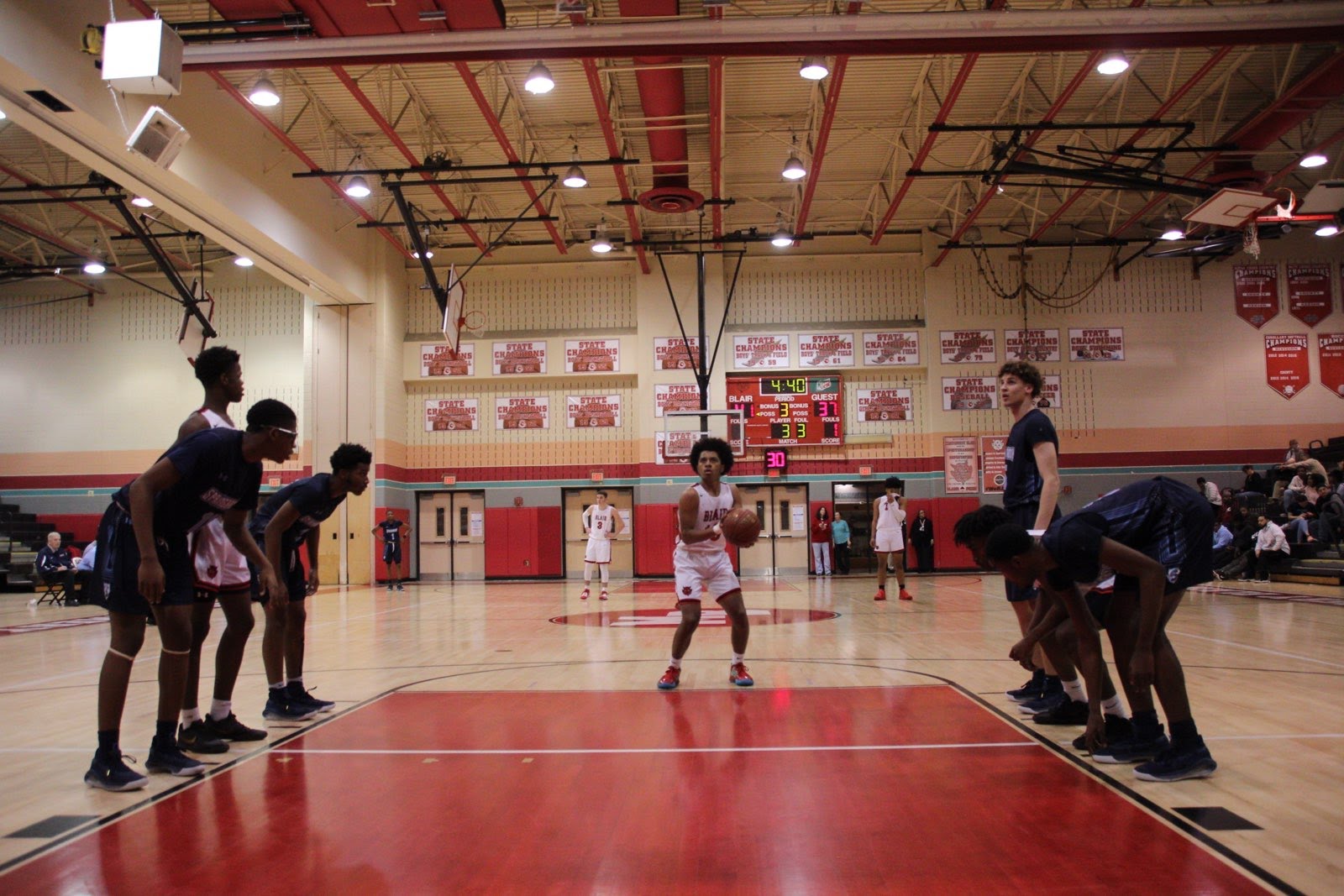 In the second quarter, the game picked up more speed. Springbrook turned to aggressive tactics, going as far as to push senior guard Liam Olagbaju to the ground in order to take a shot. The Blue Devils kept possession of the ball for some time until junior guard Roman Cannuscio intercepted the ball. However, Springbrook retook possession soon after. In the second quarter, senior center Leon Johnson made numerous baskets, bringing eight points to the team. With a free throw from Springbrook, the quarter ended at 34-31.

For most of the third quarter, Blair took the upper hand. However, the score was 45-42, with Blair leading by only three points. With two minutes and 21 seconds left in the quarter, Springbrook made a comeback and brought the score to 45-45. The teams once again traded buckets and the quarter ended in a 51-51 tie.

Throughout the last quarter, the game kept the audience on edge, as victory was not certain for either team. Although the Blazers were mostly in the lead, the greatest score margin in the last quarter was seven points. But this gap was quickly narrowed down to one, as the Blue Devils started to advance. Springbrook brought Blair's lead to a marginal 63-62. With three seconds left, a layup from junior guard Alfred Worrell put the Blazers in a 65-62 lead once again. It was certain that the Blazers would take home the victory. But within three seconds, a Blue Devil made a three-pointer, ending the fourth quarter in a 65-65 tie and sending the teams into overtime.

Blair quickly gained possession of the ball after winning the tip-off. The teams once again went into trading shots. With a minute and 47 seconds left, Blair started to lag behind, missing many shots. To prevent Springbrook from taking any more shots, Cannuscio swiped the ball from a Springbrook player, sending a roar of approval from the Blair crowd. But the score was 78-73 in Springbrook's favor, and the clock showed only 17.8 seconds left in the game. At this moment, Briggs made a field goal, bringing the score to 78-75. To keep the ball in their possession and end the game, Springbrook stopped attempting shots and passed balls to stall. The Blazers fouled a Blue Devil, who made two free throws. Those were the final points of the game, which ended 80-75.

Junior guard Jacob Briggs explained that Blair fought strong, but noted that Springbrook was a challenging opponent. "We played hard. We did what we were supposed to do, " Briggs said. "But they capitalized on our mistakes and ended up getting extra shots."

Coach Damon Pigrom explains that, overall, it was a disappointing game considering Blair's many mistakes. "Springbrook is too good of a team for us to make the mistakes that we made and come out victorious," Pigrom said. "We didn't rebound the ball well so they got extra possession with that. We fouled too much. When we lose a close game like this, there are multiple facets that we can't be deficient at. And we were deficient in too many areas."

From Pigrom's standpoint, he believes the game could have went differently if he had changed strategies. "In hindsight, after Alfred made his layup, I should have called [a] timeout to get us organized," Pigrom said.

The Blazers will play their next home game on Friday, Jan. 24 against the Northwood Gladiators at 7:15 p.m.