The Blazers lose 68-62 to the Cougars

The Blair boys' varsity basketball team (0-1) lost to the Thomas Stone Cougars (1-0) by a score of 62-68 in their first game of the season on Friday night.

After winning the tip-off, the Cougars took possession of the ball and raced towards the hoop, but could not score. Junior guard Michael Ayala caught the rebound and passed it to junior guard Alfred Roy Worrell, who drove to the basket. Despite getting fouled, Worrell managed to make a three-point play and brought the Blazers up 3-0 in just the first minute of the first quarter. A Stone player slammed into Ayala and he made the free throw, bringing the score to 4-0. Blazers in the stands went wild seeing their players start off strong. 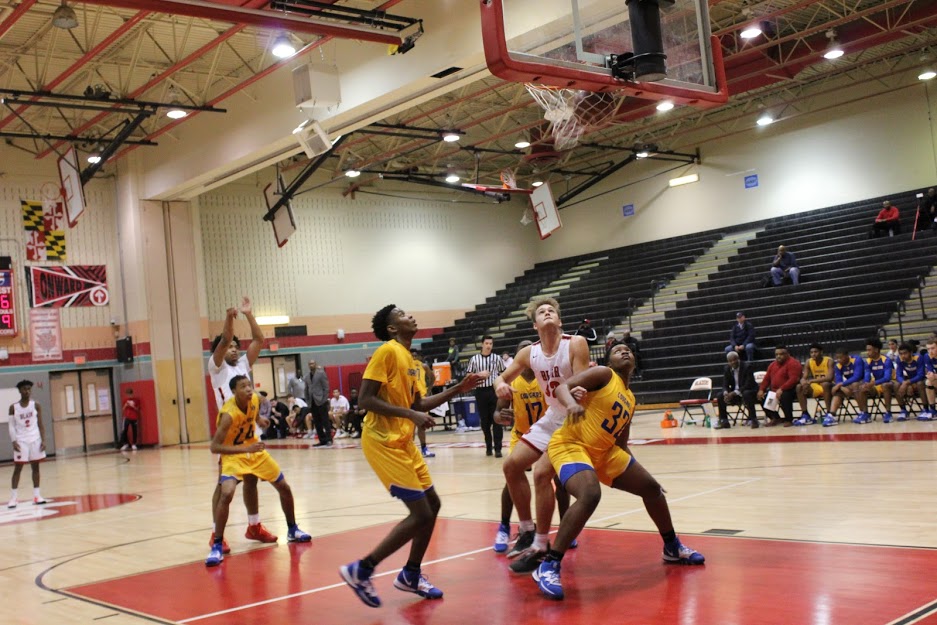 As the Cougars stole the ball back and made a three-pointer, bringing the score to 4-3, Junior center Tommy Waltz-Chesnaye took command of the ball, shooting a two-point field-goal with Worrell as assist. To rally for more points, the Cougars went for the goal, but Worrel caught their rebound and dashed to make a two-pointer. Halfway through the quarter, Stone's coach called a time-out, with Blair leading 8-5.

As soon as the game resumed, a Stone player fouled Ayala. Ayala made a free-throw, raising the score to 9-5. After flashes of rebounds, junior guard Jacob Briggs took the ball and assisted it to junior guard Roman Cannuscio, who made a three-pointer. Stone started with the ball and made a two-pointer, bringing their score up to 12-7. Although the Blazers' lead was narrowed to 12-9 by two free-throws from the Cougars, Ayala took a two-pointer. Through a series of goals and free-throws made by Cannuscio, Worrell, Ayala and Stone players, the first quarter ended with the Blazers in the lead 20-14.

The second quarter marked the ascent of the Cougars. After minutes of trading possession of the ball, the Cougars made a three-pointer and then quickly snatched the ball from the Blazers to make another two-pointer. The Blazers lost the ball once more, and the Cougars brought their score to up 20-22. Throughout the second quarter senior guard Liam Olagbaju, Waltz-Chesnaye, Worrell, Cannuscio and Briggs scored, but the quarter came to a quick finish with a score of 34-36.

The third quarter was very intense with Blair regrouping to catch up to Stone. The two teams shared blows, and the score was very close. Worrell, Waltz-Chesnaye and Cannuscio brought in points for Blair, but in the end, the Cougars made several free-throws, ending the third quarter with the Blazers down 47-51.

The fourth quarter had the most fouls and time-outs as the players hurried to bring victory to their respective teams. In the first three minutes of the last quarter, the Blazers struggled to score a point, while the Cougars brought their score to 47-55. Finally, Olagbaju grasped the ball from the Cougars and made a two-pointer, sending the Blazer audience into a happy frenzy.

However, this frenzy did not last as Stone continued to take the lead to 49-58. In the final three minutes, with the help of a foul from the Cougars, Ayala made both free-throws. The Cougars went on the offensive once again but their efforts ended in a rebound which Ayala took to the hoops, bumping Blair to 57-60.

The Blazers lagged again as the Cougars brought their score up to 57-66 with only 30 seconds left in the game. Briggs intercepted and scored a two-pointer. He was fouled and made his first free-throw. Worrell made both free-throws after an aggressive foul from the Cougars. Alas, the Blazers were rushing in the last seconds, but the Cougars ended the game with a two-pointer, bringing a loss to the Blazers 62-68.

The Blazers took lessons from their shortcomings in holding back the Cougars. Coach Damon Pigrom thought this loss was mainly due to the lack of familiarity between players and the coach. "It's only been three weeks since we started and the other team is a very strong team that usually contend[s]... for states," Pigrom said. "We need to work as a team to trust and get more familiar with each other, not just between players but also between coach and player." The Blazers will try to work on their team chemistry to avoid close losses like these in the future.

The Blazers will play their next home game on Monday, Dec. 16 against the Quince Orchard Cougars at 7:15 p.m.