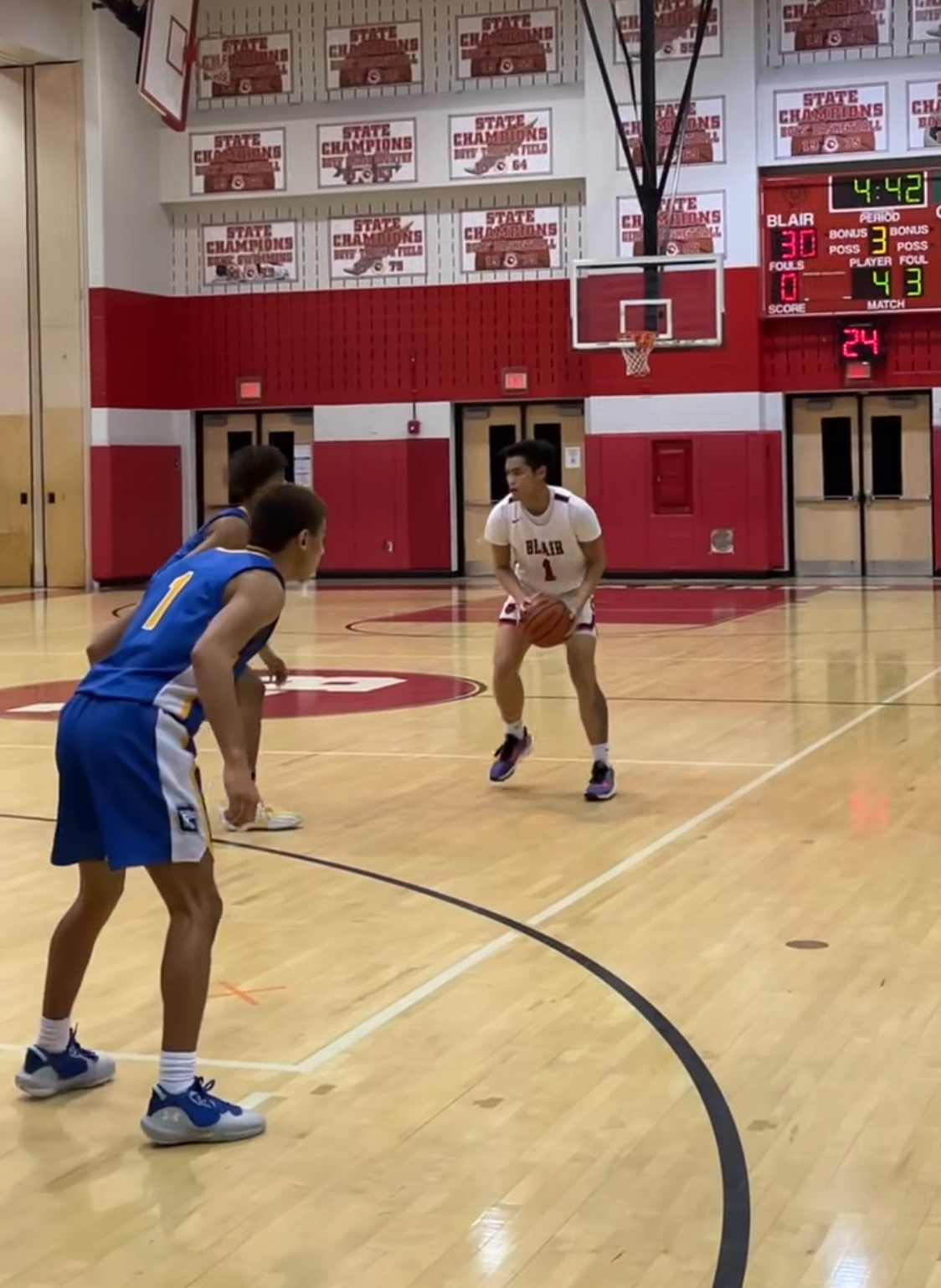 The Blair Blazers’ boys varsity basketball (0-3) dropped their home opener to the Gaithersburg Trojans (2-1) on Tuesday, December 14th by a score of 61-87. Despite a strong individual effort from senior guard Jonathan Pang, the Blazers were unable to convert in transitions and often found themselves turning the ball over to the Trojans.

In the first half, despite the Blazers' aggression on offense, they failed to turn most possessions into points and found themselves down by 20 early on in the half. To make matters worse, the Trojans initiated full court press defense on the Blazers despite being up by 20 points. This caused Blair to repeatedly turn over the ball and gave the Trojans easy lanes to the hoop.

Despite this, Pang continued to lead the team through the tough deficit. Scoring eight consecutives points off of two step back threes and a pair of free throws, the Blazers cut Gaithersburg’s lead to just nine points with a minute left in the half.

The Blazers finished the half with a bang as Pang hit a fade-away mid range just before the end of the half. Gaithersburg didn’t let the Blazers get the last word in though as they managed to sneak in a three right as the horn sounded

After a disappointing first half, the Blazers went into the final two quarters of the game in low spirits. The team’s lack of coordination with one another ultimately led to their downfall. Despite Pang's impressive plays, Blair was not able to match Gaithersburg's intensity and overall, their offense and defense suffered because of it.

Throughout both halves, Gaithersburg was able to steadily maintain a 20 point lead. Whenever the Blazers pushed on offense, the Trojans responded by mounting an offensive of their own.

Issues with communication, passing and follow through led the Trojans to continually gain possession of the ball and dominate the court. The Blazers had a few shining defensive moments, but they ultimately faded away as Gaithersburg was able to effectively break apart Blair’s plays. As time ticked down, hopes of a dramatic comeback slowly diminished, and the game ended with a score of 61-87 Gaithersburg.

Senior guard Randy Reyes believes that the loss came from not only a lack of teamwork, but also individual shortcomings. “We quit on ourselves. That team didn’t beat us, we beat ourselves,” he said.

According to head coach Paul Mensah, improvement comes down to the team making better preparations. “I’ve got to figure out how to get these kids to execute in a fashion that gives them the best chance of winning,” he says.

After three tough losses to open the season against Paint Branch, Seneca Valley, and now Gaithersburg, Mensah believes that in order to win, the team must learn to “get back up” whenever they are “knocked down.”

Pang believes that the team's downfall was partially due to a lack of skillful passing. “In the end as a team, we didn’t pass well, so that just got in the way,” he says. Looking into the future, he believes that the key to improvement is also preparation. “We have a great coaching staff, we have great teammates, we have an overall great team, we just gotta push ourselves."

Blair’s next home game is Monday, December 19 at 7:15 p.m. against Blake. Tickets can be bought here.