The Blair Blazers (5-6) beat the Springbrook Blue Devils (5-6) 10-9 with nine seconds left in the first overtime period on senior night Tuesday. The first half of the game was played on Monday and a rain delay caused it to be postponed until Tuesday. Blair's fast break offense and strong man defense gave them the upper hand in the close contest.

Blair opened the night quickly with a long goal by junior attackman Paul Moser to put them up by one. The Blazers dominated the first quarter, passing circles around the Springbrook defenders and eventually finding the net. Freshman midfielder Garrett Anderson was the next to score, and five minutes later junior attackman Sean Tan made it three to zero.

The Blue Devils found their stride on offense in the eight minute, getting off a couple of quick shots both saved by junior goalie Michael Cales. A quick clear by junior Josh Agu put the ball back on offense, where junior midfielder Wonder Abor put it home. The back and forth pace of the game continued, and Springbrook retaliated with a few successful offensive possessions, and the score was 5-2 heading into the second quarter. 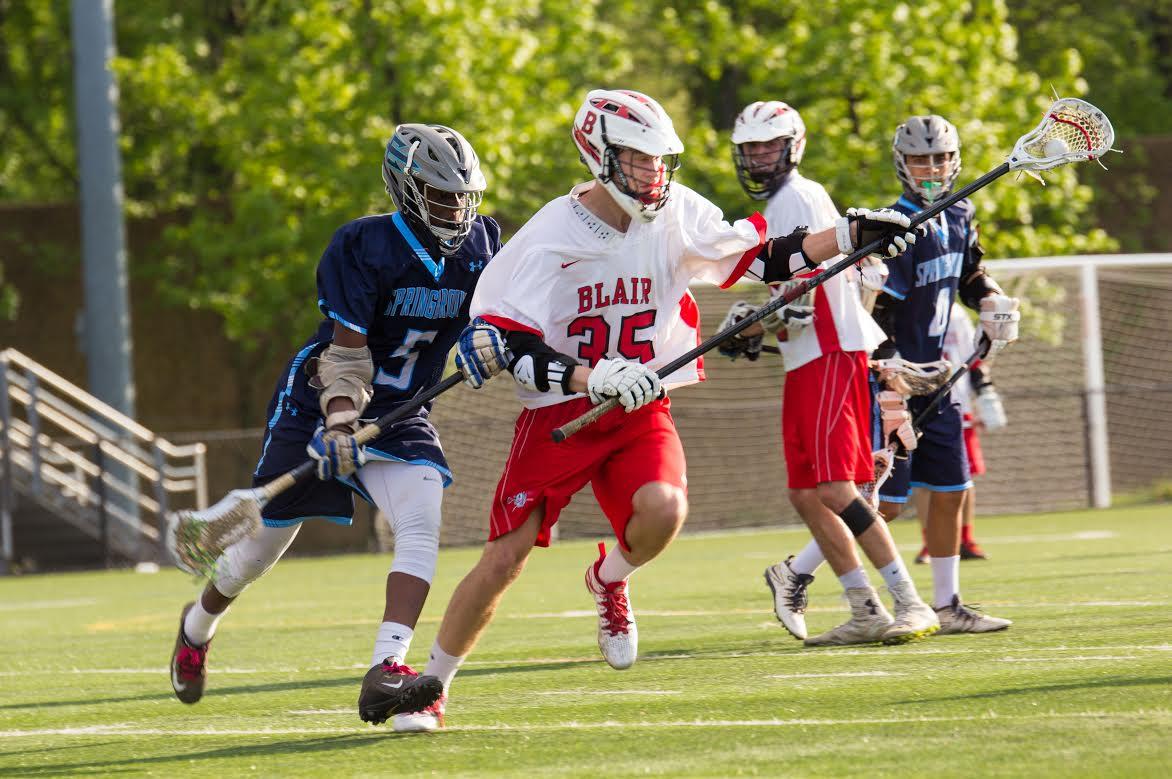 Early in the second half, Tan got another one, extending Blair's lead to four. With the game at 6-2, Springbrook finally found the goalscoring surge they needed. A few key man up opportunities gave them the momentum, quickly scoring a pair of goals. Blair struggled to keep possession on the attack, although Moser took advantage of one fast break to put the lead back at three. Springbrook went on another run, scoring two more goals to end out the half with the Blazers ahead 7-6.

According to senior midfielder Matt Guerrera, the key to Blair's early success was the involvement of the entire team. "Everyone got into the game. A lot of people played well, it wasn't just the seniors or just the starters carrying the team," said Guerrera.

Springbrook maintained momentum going into the third quarter, and tied the game with an early goal off of the opening faceoff. Blair's defense looked ready to give up another string of shots when thunder caused the game to be postponed until the next day, allowing the Blazers to gather themselves and regain their poise.

On Tuesday, Blair came out with a vengeance. Junior defender Sandy Hunter caused two turnovers on defense, giving his offense the chance to score. Blair's first goal came in the 13th minute of the quarter, when Tan caused a turnover on a clear and scored a one on one against the Blue Devils' goalie. Springbrook returned with a point of their own with a minute left in the quarter, regaining a lead of 9-8.

Neither team could find its shooting chops in the fourth quarter. Anderson scored his second goal of the game in the forty ninth minute, and Cales held on in the late going with several important saves. Blair rode out the quarter on a man up opportunity, but were unable to take the advantage, and regulation ended 9-9.

Blair went into overtime with a clear game plan. They held the possession on offense and waited for open shots, with a few by Tan and Moser going wide. The game came down to the final seconds, when a clear by Agu put the ball in Tan's stick. Tan drove at the net, drawing a defender and sliding it to sophomore attackman Uro Lyi, who shot it just under the goalie's outstretched stick. The goal ended the game in a 10-9 Blair victory.

According to Hunter, the team needs to keep the momentum if they want to keep games from remaining as close as this one. "We need to be able to pass under pressure, and go the whole four quarters without slowing down," explained Hunter.

The close finish definitely made for a great game to watch, and made for a memorable moment for one young attackman. "I wondered why nobody came to me on the man up, but I just let it rip and hoped it went in," said Uro, out of breath after the postgame celebration. Blair's next game is Wednesday against the Clarksburg Coyotes (5-5).