The Blair Blazers (15-1) beat the Walter Johnson Wildcats (13-3) 1-0 in the third round of playoffs to advance to the next round. The game was close throughout, with both teams playing strong defense up until a second half goal by junior defender Rolf Ngana.

The game opened with Blair facing many of the same struggles they had in prior matches, namely an inability to get things going on the offensive end early on. The return of senior goalkeeper Charlie Waltz-Chesney from his concussion was welcomed, as he took part in a lot of action throughout the game. In the eighth minute, Waltz-Chesney saved a strong header from the far post, and five minutes later stopped a shot off of a free kick to the low left corner. Waltz-Chesney made a third save off of another free kick, a shot from thirty yards out that was tipped over the crossbar.

According to the Blair keeper, the team needs to work on coming out strong and defending well in the first half of games. "We really need to work on not panicking on the ball, because we gave up possession and a lot of opportunities in the first half,” he said.

Blair managed to turn things around early in the second half, and after ten minutes the Blazers earned their first scoring opportunity of the game. A long cross from senior midfielder Diego Guarniz Layza bounced around in the Walter Johnson box until it was struck by Ngana into the back of the net. Ngana, who usually plays right back, was put at forward at the start of the second half, giving him the opportunity to score his first goal of the season. 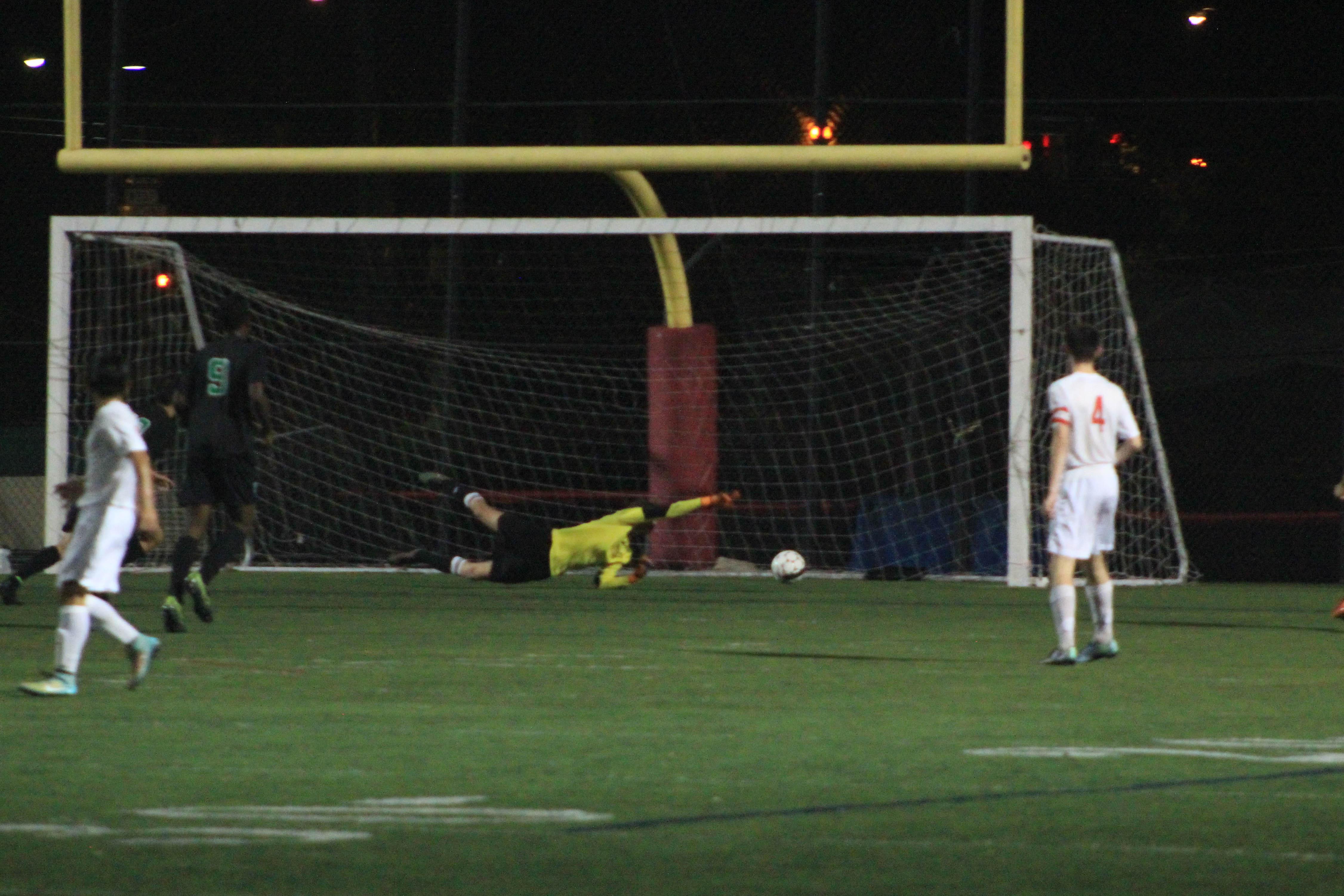 Photo: Senior goalkeeper Charlie Waltz-Chesnaye, who returned to the squad after a concussion, dives to his left.

Photo: Senior goalkeeper Charlie Waltz-Chesnaye, who returned to the squad after a concussion, dives to his left.

The Wildcats began to send numbers forward to tie the game, drawing two more free kicks, both of which were saved at the upper right corner of the goal by Waltz-Chesney. The second save was not cleared well, leading to a pileup in front of the net which was finally cleared by junior defender Alex Sarri-Tobar.

Two minutes later, in the 65th minute, senior midfielder Ronaldo Sotelo led the team on a counter attack downfield, passing it off to senior winger Jimmy McMillian who hit a well placed through ball to senior forward Michael Lake. The ensuing shot was well over the crossbar, forcing the Blazers back on defense.

In the waning minutes of the match, Blair brought most of the team into its own defensive third in an attempt to stop an equalizing goal. Shots by Walter Johnson were saved by Waltz-Chesney and cleared by Blair's center backs several times allowing the Blazers to see the game out.
According to McMillian, Blair's success stemmed from good defensive play. "We did a good job of containing on defense, which allowed us to possess the ball and play it forward to the wings,” said McMillian. Ngana added that as long as the team plays together, they will do well moving forward. "The first half, we played poorly. But in the second, we built off of what happened earlier as a team, always as a team, and our passing was key,” he said.

Ngana and his teammates are hopeful that Blair can continue its playoff run. "I'm so excited right now, I can barely speak. This game meant the most to us, this was our state final,” said Ngana breathlessly. Blair will take on the Wootton Patriots (10-3) away on Tuesday in the fourth round of playoffs.