Blair boys soccer grabs an early lead and holds on for win vs. Einstein 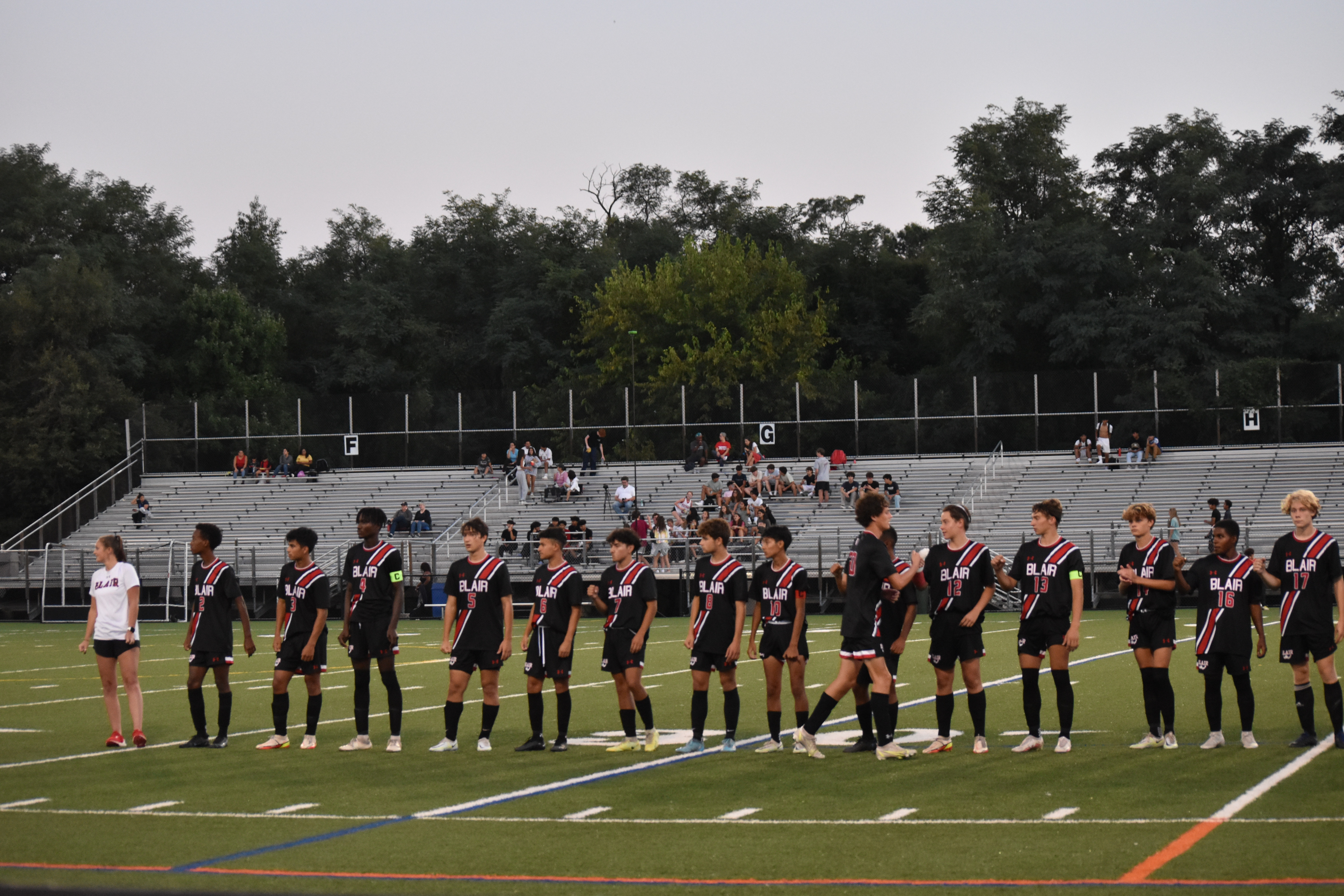 Photo: Junior forward Brendan White high fives his teammates after his name was called during the introductions.

Photo: Junior forward Brendan White high fives his teammates after his name was called during the introductions. Photo courtesy of Raffi Charkoudian-Rogers.

The Blazers (2-1-1) came into their Monday night matchup against the Einstein Titans (2-2) eyeing a two-game winning streak. They left the pitch with the prized streak in their grasp after satisfyingly shutting out Einstein 2-0 on home turf.

In previous losses and draws, Blair was unable to make use of their biggest strengths - their precise passing and seamless defense. These aspects of their play showed up for stretches of these games, but when it mattered, were absent.

However, Monday's game was different. The full 90 minutes was a passing and defense clinic put on by the Blazers. Possession of the ball was nearly always with Blair, and when it wasn't, the Blazer defense was always only a few strides from swiping it away from the surrounded Einstein players. Their midfield-led passing sequences and arcing through balls, along with their defense-initiated lightning-quick counterattacks led to multiple high-danger scoring opportunities.

And most importantly, the Blazers did not wait to get on the scoresheet. Four minutes into the game, the Blair midfield had Einstein trapped close to the sideline at the 50 yard line. Senior midfielder and captain Francisco Hidalgo emerged with the ball and dribbled to the open space at the center of the field. 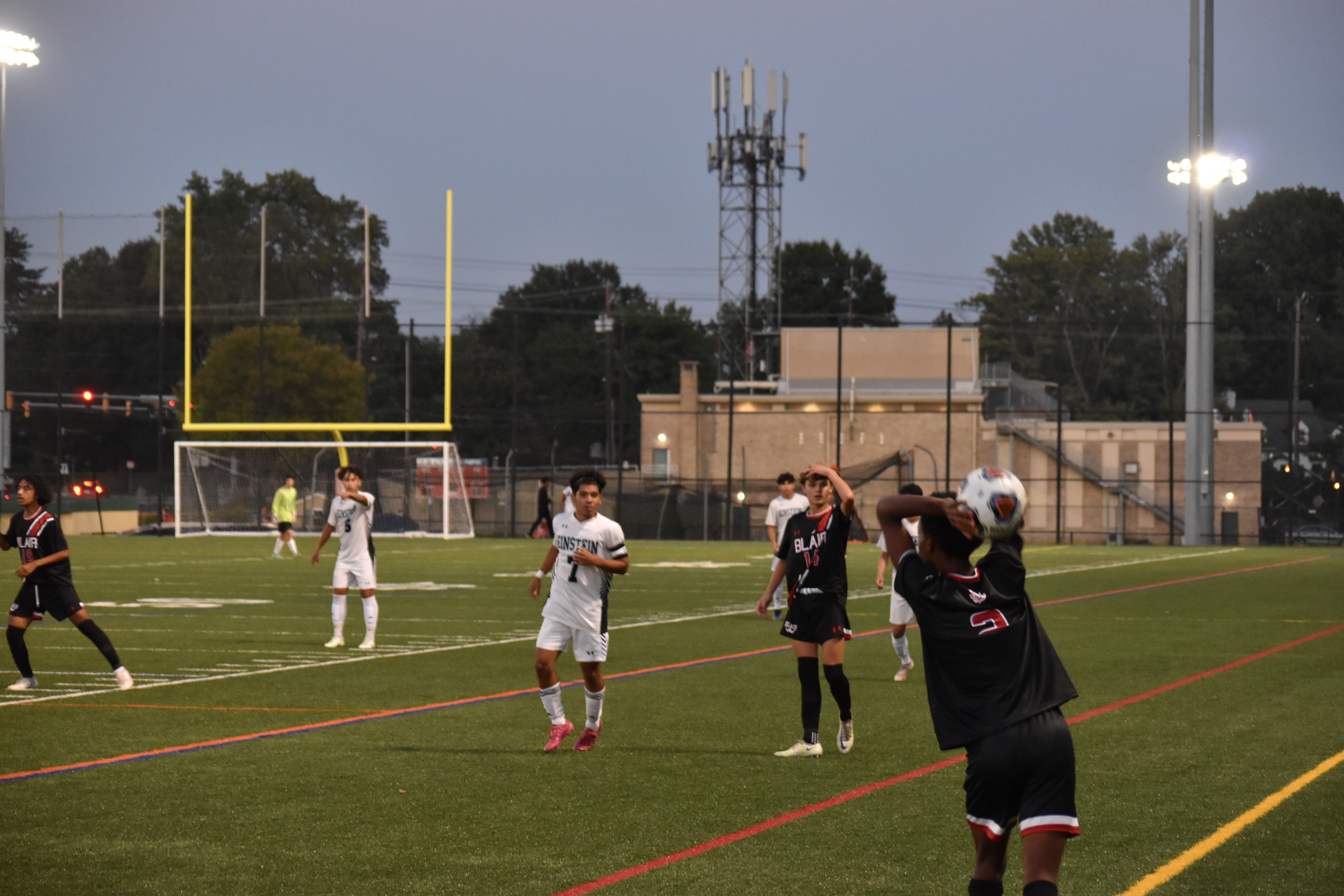 Hidalgo then lifted a pass over the Einstein defense down the right side of the pitch and connected with sprinting senior forward Franklin Reyes. Reyes collected the ball, turned around, and passed it off to junior midfielder and captain Oscar Rivas who was waiting at the top of the penalty box.

Rivas settled the ball, took a few steps to his right and let a shot fly. The ball majestically curled into the very top right corner and splashed into the back of the net, triggering an earlier-than-usual celebration from the Blair fans and bench.

The next 30 minutes of the match played out in Blair's control, with the ball seemingly always at their feet as they switched the point of attack through pass to pass in the midfield, trying to probe Einstein's back line and midfield.

The half ended with Blair in control, however only with a one-goal lead.

The second half played out similarly to the majority of the first. The Blazers dominated possession and had the occasional scoring chance, while Einstein’s offense did not have many opportunities to score.

The Blazers put more pressure on the Titans’ goalie during the second half than during the first half. The Titans’ primary keeper, junior Amani Sani, was unable to play due to receiving a red card in the previous game. Therefore, Einstein’s backup goalie was making his first start of the season. 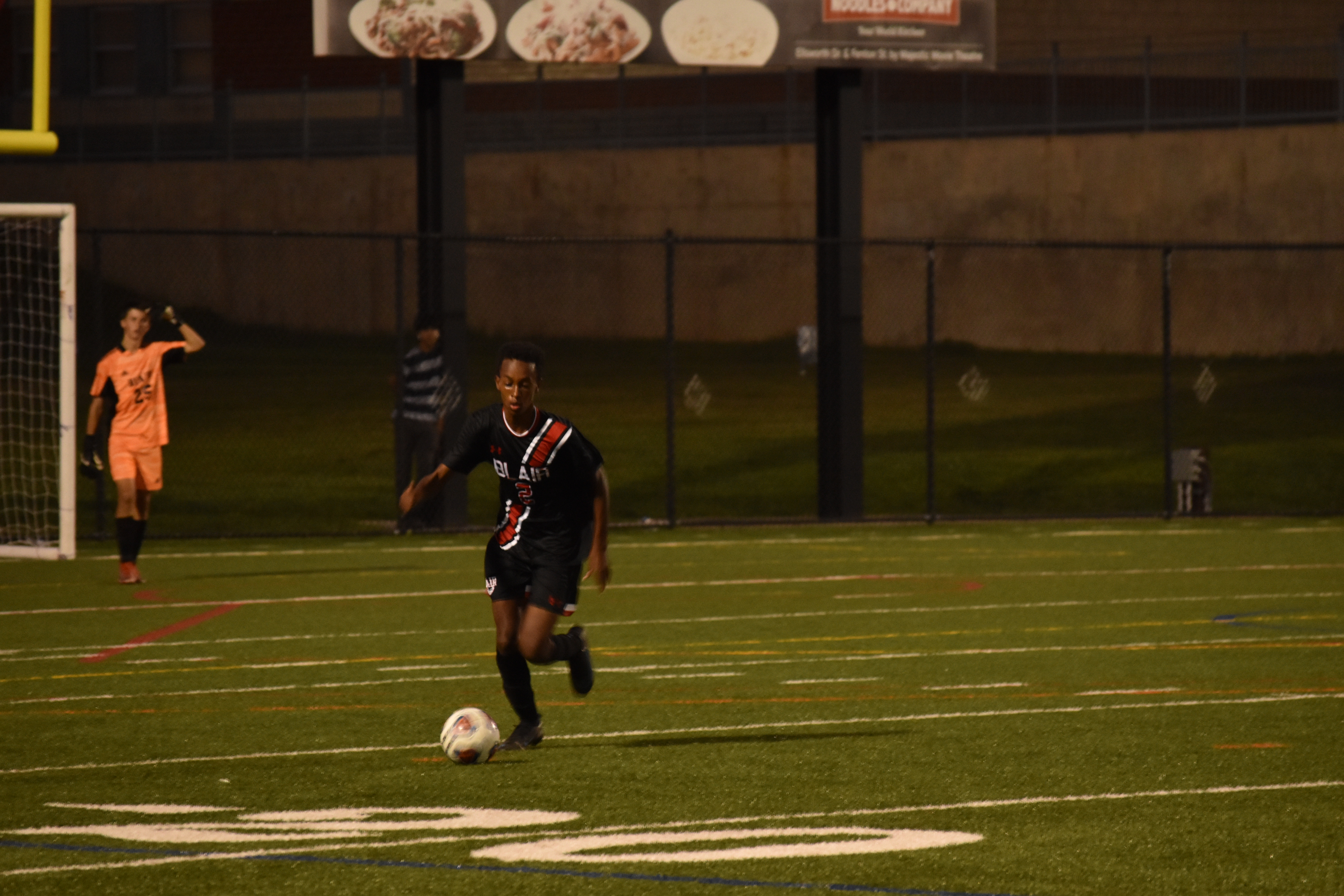 The Blazers challenged him several times during the half. He displayed some shakiness but kept the Blazers out of the goal until the 87th minute.

With three minutes left in the game, Einstein was called for a foul at around 25 yards out. Junior defender Kevin Quincin stepped up to take the free kick. He calmly strode up to the ball, kicked it, and sent a screamer into the top right corner, past the diving Einstein goalie. This goal effectively sealed the contest.

A few minutes later, the horn sounded and the Blazers concluded a well-rounded performance, obtaining the two game winning streak and improving their record to 2-1-1 after two straight poor performances to start the season.

Rivas spoke to Blair’s improved performance over the last two games — The Blazers beat Blake 3-0 last Thursday for their first win of the season. “We dominate every game, to be honest. We just have to finish our chances, that’s pretty much what we’re missing. A few mistakes, we work on them in practice every single day, we show up. Everybody’s putting in the work, and the results are coming out. We’re looking strong."

The Blazers' next home game is Thursday, Sept. 19 at 7:15 PM against Northwood.