The Blair Blazers (15-1) beat the Wootton Patriots (10-4) 3-1 Tuesday in the regional championship game. The Blazers took a commanding three goal lead early in the game, and Wootton scored a late goal in a bid to get back into the game. With this victory, Blair advances to the state semifinals.

The Blazers opened the game on the attack, with senior midfielder Ronaldo Sotelo taking two shots within the first minute, both saved by the Wootton keeper. Senior striker Michael Lake also contributed a header in the fifth minute, which soared over the crossbar.

Wootton began to find its rhythm after ten minutes of intense pressure from the Blazers, forcing senior goalkeeper Charlie Waltz-Chesney to make several saves. Senior captain Miguel Lopez also contributed a key tackle in a one on one with the Patriots' striker on the wing. 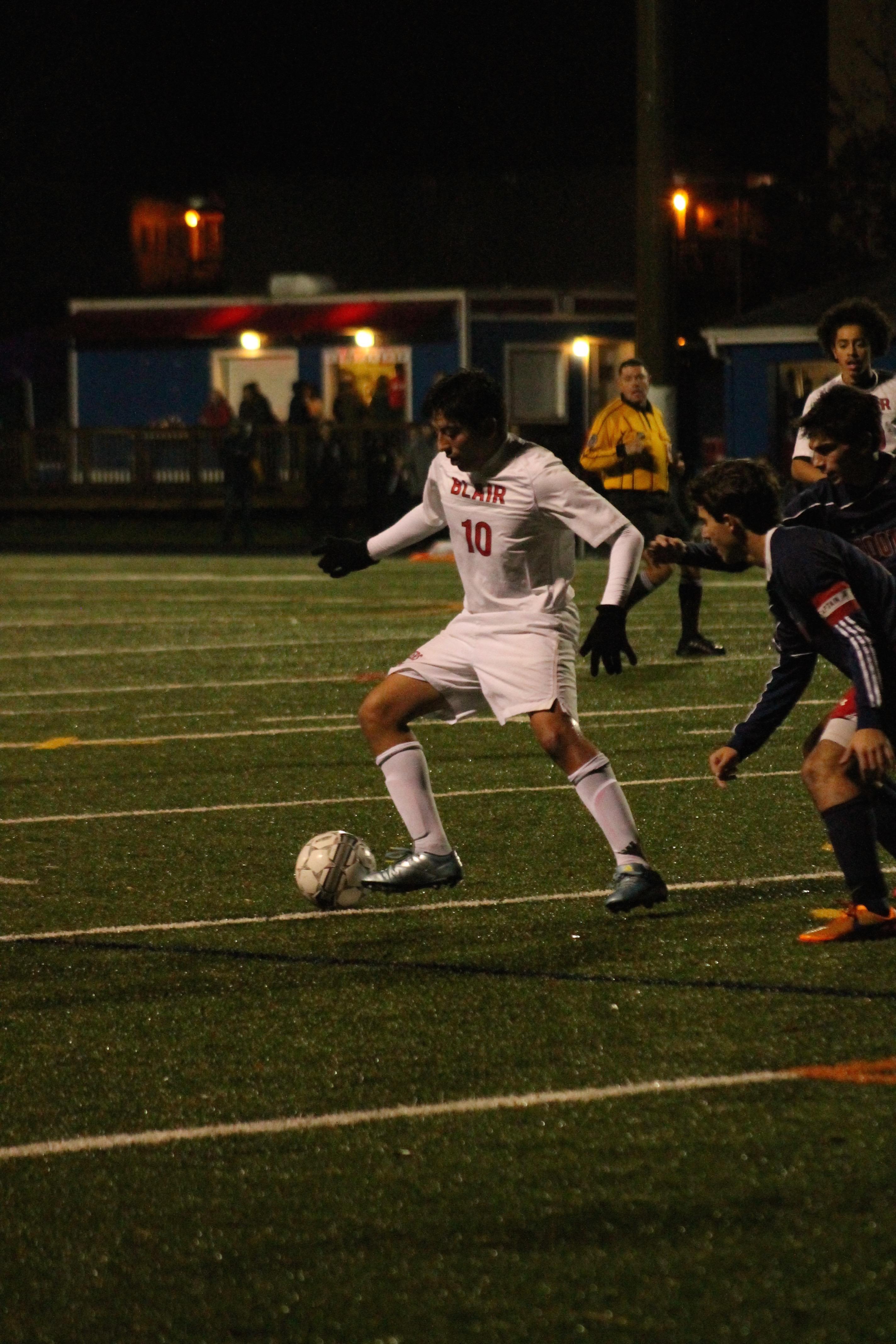 With eight minutes remaining in the first half, the Blazers found a way through the backline. Senior captain Jimmy McMillian juked his way past three Wootton defenders and hit a through ball on the ground to Sotelo. Sotelo took two strides alongside the ball, and then struck it into the upper right corner of the goal, putting Blair up 1-0. Sotelo got another chance in the 38th minute on a free kick from thirty yards out which was stopped by the Patriots' wall.

According to junior defender Alex Sarri-Tobar, the team did a good job of capitalizing on their opportunities. "We scored more goals than we had in the last couple games, and that came from our strong possession in the midfield,” said Sarri-Tobar.

Early in the second half, Wootton fought to remain in the game, but to no avail. Senior defender Jesse Griff-McMahon along with Sarri-Tobar defended two corners and a breakaway, putting an end to the Patriots' scoring chances for the remained of the game. Sotelo hit two long balls to McMillian, both of which were collected by the Wootton goalkeeper.

In the 66th minute, Sotelo found the back of the net once again on a volley at the top of the box. According to Sotelo, while he scored two of Blair's goals, teamwork was what brought the group together in this game. "We won almost every 50/50 ball, and we were aggressive. My teammates really gave me all of the opportunities I needed to score,” explained Sotelo.

Two minutes later, junior midfielder Jordi Long found an opening at the top of the box, and his shot was deflected past the goalie into the back of the net. With a safe three goal lead, Blair stayed back on defense, giving up a goal off of a header on a corner kick in the 75th minute. The game ended 3-1.

Blair moves on to face the Meade Mustangs (15-1) in the state semifinals next Saturday. McMillian is confident in his team going forward. "If we keep on playing like this moving forward, I definitely think that we'll be bringing home a state championship,” said McMillian.