On Thursday, the Blair boys' varsity wrestling team defeated the Broadneck Bruins 48-23. Throughout the evening, the Blazers fought strong, whether pinning their opponents early on or resisting a hold until the very end.

Junior Brian McCaw earned three team points in the first match, but the Blazers fell under 6-3 due to a forfeit in the second match. In the 126-pound weight class, senior Aidan Rogers began closing the point gap. After struggling against his opponent for nearly three periods, Rogers managed to turn the tables in the final moments. "I was losing for 95 percent of the match and at the end I was down four to nothing," Rogers said. "I got a reverse cradle and turned him onto his back and got five points in the last second." 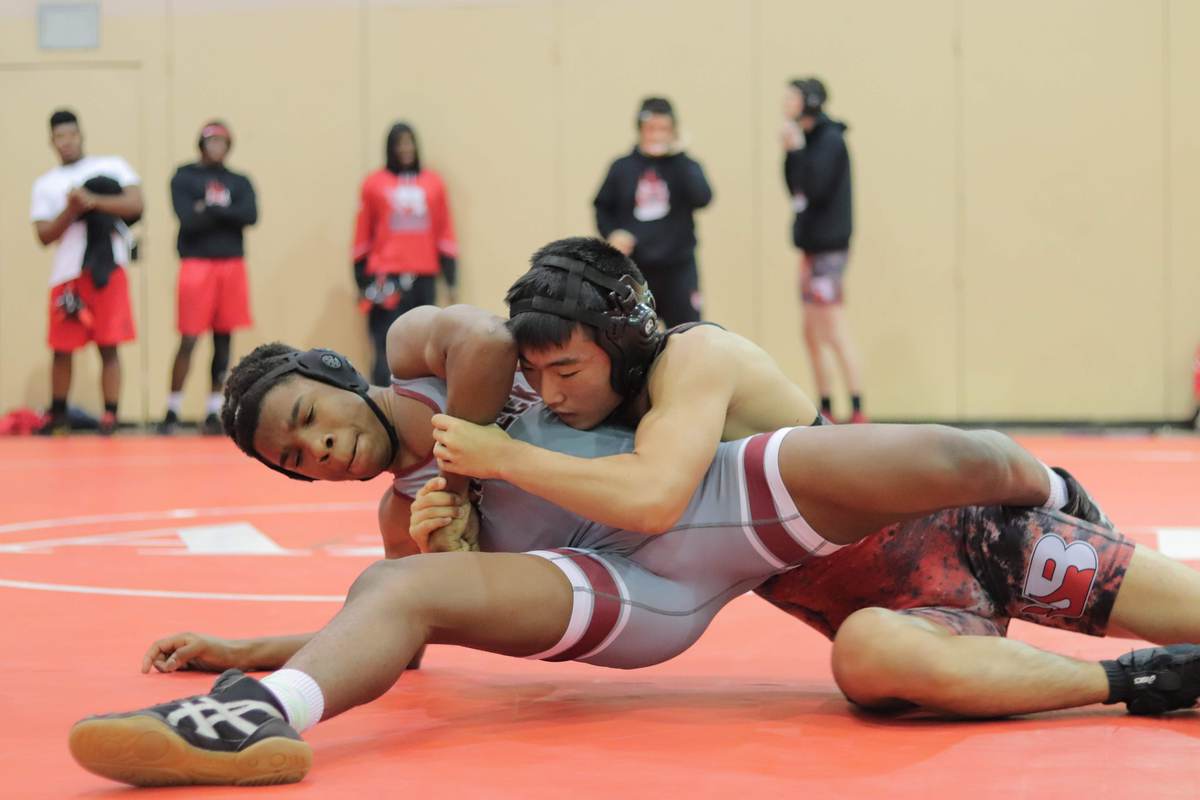 Photo: Junior Kim holds his opponent tight while he makes an effort to escape (courtesy of Jaedyn Taylor).

Photo: Junior Kim holds his opponent tight while he makes an effort to escape (courtesy of Jaedyn Taylor).

In the 145-pound weight class, sophomore Junior Kim pinned his opponent in under two minutes as well, giving the team another six-point boost. "I tried a pinning combination move in the first period but slipped and almost got pinned, which would have been terrible because he was not better than me," Kim said.

Junior Luke Merill and senior Jason Kaplan persisted through their matches, but Broadneck began closing the closing the point gap. However, Broadneck forfeited the 170-pound match, bringing Blair back up 30-17.

Sophomore Izu Nweke pinned his opponent in the third period as well, increasing Blair's lead. "I started off easy to preserve energy, studying his weaknesses to see what I could do," Nweke said. "I just kept on building up points in the second period— then I saw the opening in the third period and I pinned him for the win."

Senior Kemith Sturdavent wrestled for the first time on varsity at this match in the 285-pound weight class, giving team captains and seniors Elias Chen and Mervin Mancia the opportunities to wrestle in their home weight class instead of those up to 100 pounds more— in order to place a wrestler in each match. "He was scared and I knew he was backing out." Mancia said. "Wrestling 220 felt like home."

Chen noted that today's match was representative of the Blazers' spirit. "Starting out, we were a little bit sluggish, but once we kicked it into gear, we looked sharp," Chen said. "We got a lot of third period pins, and I think that's the team we're becoming— we wrestle hard, and even if the other guys are better, we're tougher."

Chen also felt confident about tonight's win and what it means for the wrestling team's future. "This is the kind of match that I could see us getting lazy or sloppy in previous years, but today we really pushed and sealed the deal," he said.

Blair boys' varsity wrestling will play their next home match on Wednesday, Jan. 8 against Clarksburg at 6:15 p.m.