The Future Educators Association (FEA), along with the Technology Student Association (TSA), are selling paper hearts outside of the Student Activity Center (SAC) until Feb. 15 to raise money for the American Red Cross, according to FEA sponsor and Human Services Professions Academy lead teacher Lisa Seid. 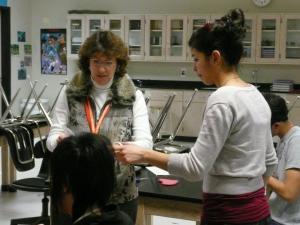 All money raised will be donated to the Red Cross's "Have a Heart, Save a Child" program for the Measles Initiative, a partnership of multiple charitable organizations committed to reducing the number of measles deaths worldwide, according to the Red Cross.

For $1, Blazers can purchase a heart and attach a school-appropriate message like a shout-out to a friend. The FEA will then display all of the hearts on the large column outside of the SAC.

Seid hopes to raise $600 through this fundraiser, and the club members share her optimism. "We really hope this idea works out," Romero said. "I think it will work out well because it is really creative and something students would actually get involved in."

The idea for the fundraiser arose when Red Cross representative Rahewa Arefayne visited the FEA at Blair on Jan. 9. Arefayne provided the club with information regarding different programs the Red Cross was raising money for and ways that Blair could help. The representative mentioned that the paper heart idea had been done before, and the club thought it would be a good way to raise money, according to FEA club president Jennifer Romero. "We really liked the idea," Romero said. "It seemed really creative and was different from other ideas." 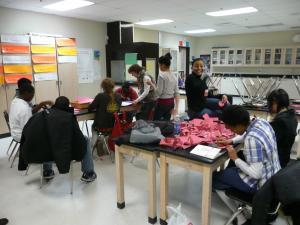 Photo: Students in the FEA and TSA work together to make the paper hearts.

Photo: Students in the FEA and TSA work together to make the paper hearts. Photo courtesy of Anshul Sood.

The members hope to raise money as well as measles awareness among students. But the clubs have another goal for its members. "A big idea here is to bring students together that don't normally work together," Science, Math and Technology lead teacher and TSA sponsor Robert Hopkins said. "It's good camaraderie and helps students buy into the establishment of a school community, similar to a sports team being a community."