Blair's student enrollment is expected to rise significantly in the next few years, according to Superintendant Joshua Starr's latest Capital Improvements Program (CIP) for Montgomery County Public Schools (MCPS). The six-year plan predicts that enrollment will increase by 215 students in the next six years and exceed Blair's capacity altogether by the academic year 2017-2018. Five months after the CIP's release, questions still remain over the implications of this expected growth for Blair staff and students. 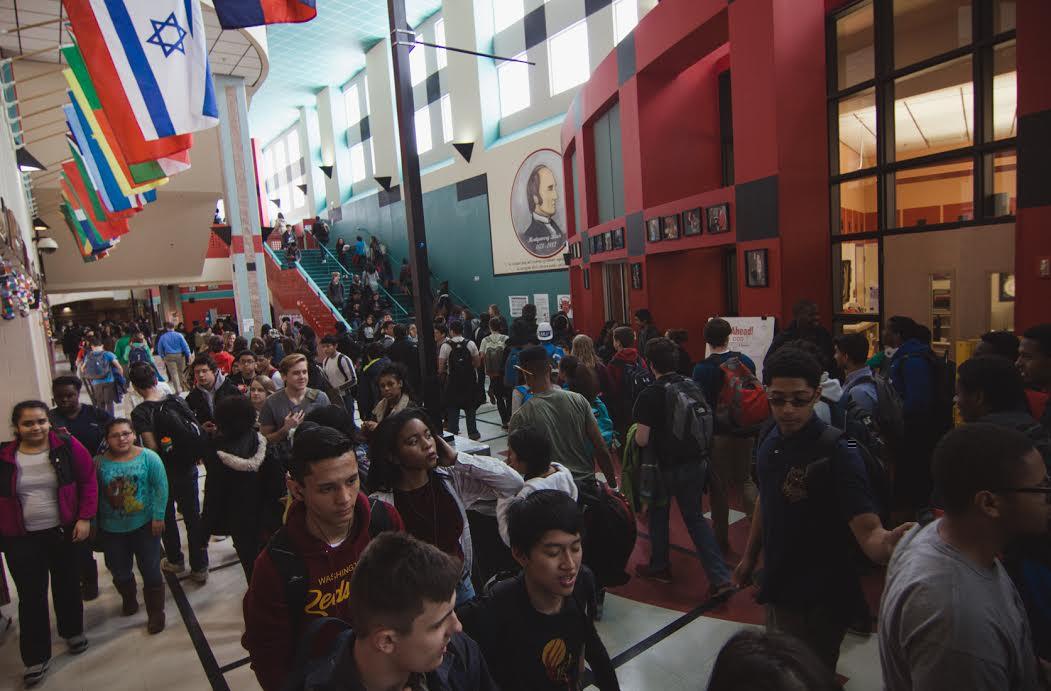 Photo: Student enrollment at Blair is expected to exceed capacity by the academic year 2017-2018.

Photo: Student enrollment at Blair is expected to exceed capacity by the academic year 2017-2018. Photo courtesy of Sam Howells.

According to Assistant Principal William Currence, the predicted figures reflect a county-wide trend that has become prominent in recent years. "This is the sixth consecutive year that total enrollment in the county, including in K-12 and pre-Kindergarten programs and services, has gone up by 2,000 or more every year," he said. Currence attributes the growing number of students to an increase in Montgomery County's overall population, resulting in county-wide repercussions. "This is a challenge that every school in the county is facing," he said, citing Northwood High School's 2004 reopening and Gaithersburg High School's 2013 expansion as examples of adjustments that schools have made in response to the rise in enrollment.

Currence believes that county trends combined with Blair's popularity among prospective students account for the CIP's predictions. "Blair has always been highly selected among the [Down-County Consortium] (DCC) schools," he said. "People in the community know and like [Principal Renay] Johnson and the community also knows about the Magnet and [Communication Arts Program]. Blair offers electives from these programs that anyone can take, so this also makes Blair more popular."

Although the impact of the increasing student population is uncertain, many believe that having enough staffing could become a key issue. "The county wants each counselor to have 250 students but right now I have 271 students, so when there's even more enrollment, it'll be harder to stay as close as I can to the county-recommended number," counselor Roland Hollins said.

Many agree that the issue of staffing could also extend to the classroom. "Hopefully, if they increase the student population, they'll increase staffing to maintain the same class sizes," English teacher David Goldberg said, a sentiment that sophomore Hannah Kaufman shares. "Small classes are much more relaxed and conductive to learning because the teacher has time to pay closer attention to each individual," she said.

For Currence, student enrollment exceeding school capacity could even translate to the use of portables. "We have more teachers than classrooms as it is, which is why teachers often have to float between rooms," he said. "So they might have to bring more and more portables in."

Another potential impact is a need for greater resources to accommodate a larger number of students. "There may be an issue where things are getting used more and therefore get more worn out, like Promethean boards being run all day and getting bad," Currence said.

No matter what repercussions Blair will face in the coming years, however, staff members stress that it is ultimately up to the MCPS Board of Education to decide how Blair will work to accommodate students, including whether to expand the staff and resources. "It all depends on the county," Hollins said. "We can petition to the Board but there might not be the money." However, Currence maintains that there will still be room for staff, parent, and student input through public forums that will factor into MCPS's ultimate decision-making.

Regardless of its potential implications, administrators insist that rising enrollment poses only a challenge rather than a problem to the Blair community. "Our focus is still going to be on whether we are offering classes students want to take, whether the community is involved—things like that. We'll just have more students," Currence said, adding, "Everyone knows enrollment is going up and everyone's on board with it."

Kaufman echoes this optimistic outlook regarding what an increase in students could mean for Blair. "I like being in a really big school because there's a huge variance in people and it's pretty easy to make friends," she said.