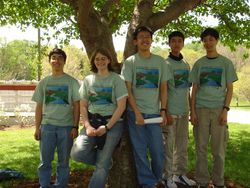 The Montgomery County Envirothon competition is held each year at the end of April and covers four areas — aquatics, forestry, wildlife, soils — and an additional fifth current issue, this year "water stewardship in a changing climate." In the course of the competition, each team took five 30-minute written exams (each worth 100 points plus bonuses) on each of the topics. The winning team advances to the state competition, which will be held at the William S. Schmidt Outdoor Education Center in Prince George's County on June 20-22 later this year.

Team CX received the highest score in the forestry section with 103 points, 21 points greater than the second-highest score in forestry. The new record in the forestry section came as a surprise for the team members. "I didn't really expect to do quite so well in forestry," said CX team member Li. "We couldn't decide on quite a few answers. One [section of the test] was [a] tree identification, and we had absolutely no idea what kind of tree it was. So we wrote 'tree.'"

Though Team CX is currently in first place, there is one more round of competition before the winning team advancing to the state competition is determined. In three weeks each of the five teams, all of Blair's, will give a presentation relating to the designated current issue, "water stewardship in a changing climate." This presentation is worth 100 points.

Team sponsor Tran Pham anticipated a good performance from the eight Blair teams in this competition. Noting that even though Blair's Envirothon participants do not commonly take environmental science like the students from the other two competition schools, Paint Branch and Wootton, Pham expects the Blair teams to "have common sense" about the competition and use this ability to do well each year.