Blair wins 41-17 after a big second half

The Blair Blazers (5-3) beat the Clarksburg Coyotes (5-3) Friday night, 41-17. Senior running back Brandon Ntankeu led the way for the Blazer offense, with 4 touchdowns. Senior wide receiver Maada Kposowa and senior running back Nashon Orleans each added a touchdown as well. On defense, senior linebacker Kyle Smith had a sack and senior safety Caleb Francois had a game-sealing interception. To prepare for the game, the team focused on the run game, and "kept repping with [the] linemen," Ntankeu said. 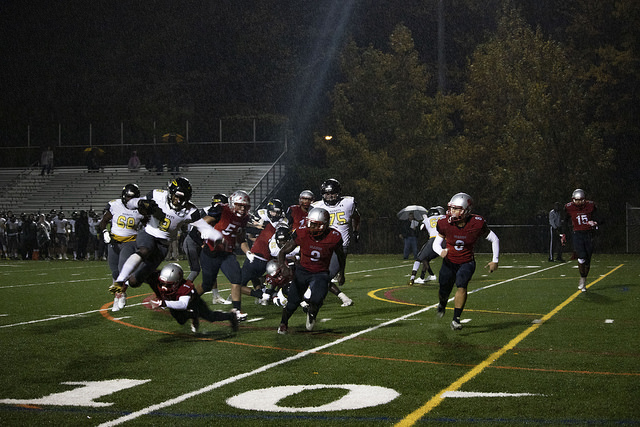 Photo: The Blazer defense tried to stop the Rocket's offense, but came up short in the end.

Photo: The Blazer defense tried to stop the Rocket's offense, but came up short in the end.

On the first drive of the game, Blair drove 78 yards down the field, only to turn the ball over on downs. In response, Clarksburg went all the way back down the field and kicked a field goal to open the scoring 3-0. The Blazers followed that up with the first touchdown of the game, a short run by Ntankeu.

Following that score, both teams failed to score on their next drives, with Clarksburg punting and Blair having a pass intercepted. With a short field, the Coyotes drive ended in a touchdown, making the score 10-7 in Clarksburg's favor. But the Blazers battled back, with a touchdown and missed PAT, making the score 13-10 going into the half.

Clarksburg had the ball beginning the third quarter, but ended up punting. The Blazers started their drive on their own 17-yard line. They made it halfway down the field, when they were faced with a fourth down. In a gutsy move, Blair went for it on fourth down, but did not convert. This gave the ball to Clarksburg at the Coyotes 42-yard line.

The Coyotes, to the Blazers' delight, went three and out and tried to punt. However, the snap was too high for the Clarksburg punter, which resulted in a fumble. This gave Blair the ball at Clarksburg's 26-yard line. With a really short field, the Blazers easily scored and increased the lead to 20-10. The Coyotes then punted on their ensuing possession.

This opened a door for the Blazers, who went on to score a touchdown. On Clarksburg's kickoff return, senior safety Bryant Kang stripped the ball, and Blair recovered. "I [had to] … do it for my team" Kang said. On their next possession the Coyotes had a lost fumble. Blair looked to score again, but senior quarterback Pablo Perez's throw was intercepted. On Blair's next drive, the scoring opened up. Touchdowns were scored on three of the next four drives, with the exception being a fumble by Clarksburg. On Blair's final drive, the Blazers had a turnover on downs. The Coyotes, in a last ditch effort, started throwing deep passes, with no success. On the final play of the game, Francois caught an interception.

The Blazers' plan for the end of the season is to watch more film and improve the secondary. For the "Battle of the Boulevard" next week however, the team is going to be a bit more relaxed preparing for the perennial cellar-dweller. "We're not [going to work too hard]" Coach Andrew Fields said. The team is just going to "correct [a few] mistakes" Kang added.

Next week, the Blazers take on the Northwood Gladiators (1-8) at Northwood.