The girls' varsity basketball team went on a twelve-point scoring run in the last quarter to win 45-29.

On Feb. 25, Blair defeated the Paint Branch Panthers 45-29 to win their first playoff game of the postseason. After trading baskets with the Panthers for the first three quarters, the Blazers went on a twelve-point scoring run in the last quarter to cement their victory. 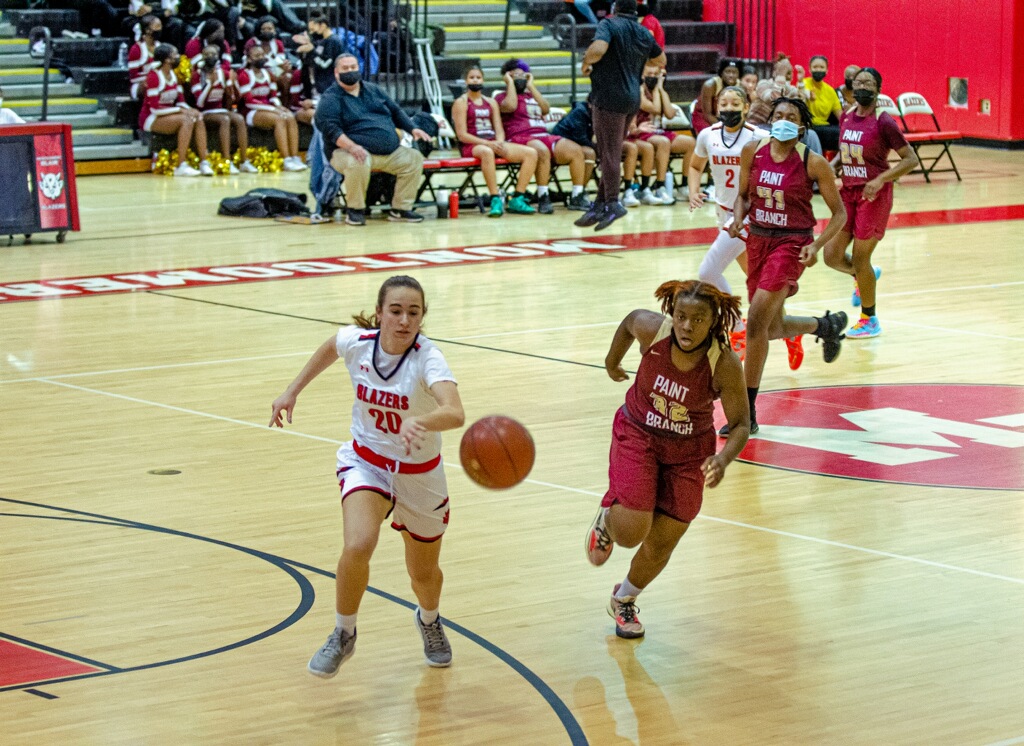 During the first quarter, incomplete passes, fumbles, and steals by the Panthers' defense prevented the Blazers from racking up points. The Blazer offense also suffered from a series of faulty passes and missed layups, though senior guard Emily Liu drained a three and junior guard Natalie Frost managed two three-pointers, the latter with one minute left in the quarter. However, Paint Branch's defense remained strong enough to stifle multiple scoring opportunities and prevent the Blazers from gaining a lead that could’ve given them some breathing room going into the second quarter.

The Blazers started to move the ball more cleanly and efficiently during the second quarter, resulting in fewer turnovers and more scoring opportunities. A series of layups from freshman guard Amorah Watts, freshman guard Safa Al-Uqdah-Robinson, and Frost helped Blair tie the score at 17-17. A two-pointer with a few seconds left on the clock gave the Blazers a slight edge heading into the third quarter with a score of 19-17.

The third quarter started off strong with layups from senior forward Sayara Thomas and Frost, who later put on a freethrow clinic by making 3 consecutive shots. Frost and Liu showcased their poise on the court as they moved the ball down the court together with laser-beam passes. But the Blazers still struggled to capitalize on their ball movement and fell just short of making multiple easy baskets, with the exception of another layup from Frost. By the end of the third, the Blazers held a slight advantage of 28-24.

The Blazers turned up the heat in the fourth quarter. Frost and Liu continued to move fluidly down the court and each scored a layup within the first minute. Al-Uqdah-Robinson finished off rapid ball movement between Liu, Frost, and Thomas with a layup, and Frost kept the momentum going with another bucket to give the Blazers a ten-point lead.

Back on defense, Frost intercepted a Panther pass and beamed the ball to Liu, kicking off another fast-paced exhibition of stellar ball movement. Liu passed it to senior guard Shiloh Burke, who demonstrated a knack for getting open throughout the game; the ball then traveled to Frost, then to Liu and back to Frost who arced the ball in for a beautiful three-pointer, concluding what was certainly the most impressive play of the game.

Paint Branch managed to break Blair's fourteen-point scoring streak with a two-pointer, but Al-Uqdah-Robinson quickly responded with an "and one," followed up with a layup from Thomas and another point from the freethrow line.

Now with a 16-point lead and less than thirty seconds left on the clock, Liu slowly dribbled the ball down the court as the crowd erupted in cheers.﻿