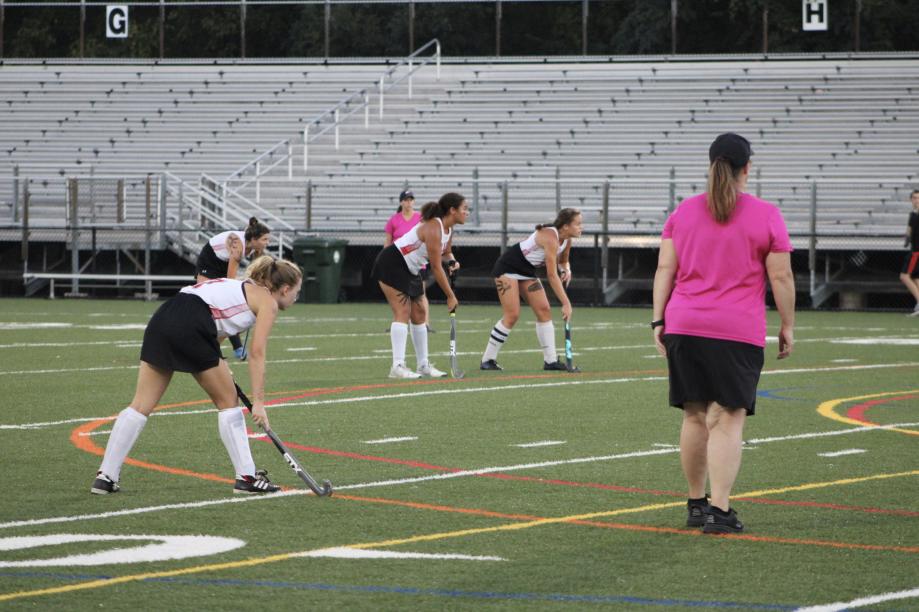 On Sept. 8, the Blazers (1-1) cleared their first victory against the Einstein Titans (2-1). Dominating the field, Blair’s girls’ varsity field hockey team did not let a single goal penetrate their defense and won the game 4-0.

Blair kicked off the first quarter with an exciting start. The air was dense with energy, the audience frequently roared as Blair's offense pushed the opposing defense down the field. The two teams engaged in a furious back-and-forth.

It was clear, however, that the quarter would not end without a goal from Blair. The Titans’ defense was under severe pressure and Blair’s energy at all time highs, so it did not take long before the opposing team tripped up. After the other team suffered a penalty corner, Senior captain Delia Chen swept the ball into the goal which resulted in a score of 1-0 to end the first quarter.

The second quarter was almost as phenomenal. Starting off similar to the previous quarter, the Blazers pushed the Titans towards their goal, and sticks clashed as the teams fought to score. A sudden shot caused the ball to zoom towards the Blazer’s side, but it was soon recovered and the battle resumed in the center of the field.

With less than ten minutes left in the quarter, the audience broke out into cheers and chants as the teams engaged in a tough skirmish to the left of Einstein’s goal. Twice, senior forward Hailey Rose Moore nearly scored as she shot the ball towards the goal, but her attempts were rebuffed by the other team. The second quarter closed without a goal from either team, and halftime began with a score of 1-0.

No point was scored in the second quarter, but the Blazers' spirit remained as unfaltering as their lead. Comparing it to their previous game, junior defender Scarlett Peterson said, “The energy was definitely a lot better.” Team spirit remained strong, as the game faded into the third quarter.

Blair’s momentum did not stop there. Junior midfielder Teddy Curtin made multiple advances in the striking circle but the Titans’ defense did not relent. Only in the final minute of the quarter did the opposing team’s pace start to diminish.. Racing against the clock, sophomore forward AnhTam Pham took possession of the ball and made a clean sweep into the goal. The Blazers cheered as the final seconds ticked down, ending the quarter with a score of 3-0.

The final quarter was a breeze for the Blazers; all the pressure shifted to Einstein. The Titans had a missed opportunity to score in the last nine minutes, but Blair quickly turned possession over and looked to strike. After a succession of swift passes, senior captain Eleanor Moose weaved into the striking circle, causing the Titans to stumble and score an own goal with only two minutes left on the clock.

Einstein’s offense was frantic, losing possession quicker than they gained it. However, as the seconds counted down, Blair’s victory was obvious. The match ended with a final score of 4-0.

Head coach Holly Stofa was proud of the team’s performance against Einstein. “Every single player played [and contributed] tonight,” she said. “They played at a high level, they played fast, and they played together. It was a real team win.”

Blair’s next home game against Quince Orchard is at 7 p.m. on Friday, Sept. 16.