Every public high school in the county was invited to play in the competition. Blair responded to the invitation by practicing extensively and composing original cadences for use in the competition. The win comes after several weeks of intensive practice, including two weeks of daily rehearsal sessions. 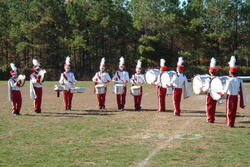 The drum line took advantage of loose requirements for the competition, developing a routine that incorporated formation marching, numerous cadences and dancing. "There were almost no set requirements besides 'put on a ten minute show,'" said junior and snare drummer Ele Rubenstein.

Drum line coach Mike Ranelli, who was hired for the football season but volunteered to continue working with the line in preparation for the event, called daily practice sessions every school day last week. "We practiced until our hands nearly froze Thursday and Friday. It was so cold," said drum line captain Andrew Bort, a junior. The line had previously rehearsed two to three times each week.

After arriving early to warm up and watch other schools perform, the drum line marched on to the football field at Kennedy playing "How's my Hair," a cadence Rubenstein wrote. After performing "Kadence" and "Plasma," two of the line's staples that are often played at football games, the drum line launched into "Dance Off," a cadence that Rubenstien and quad player Bort composed together specifically for the competition, changing formations several times during the show. They closed with "Spyder," another frequently-used cadence, and marched off the field playing final bars of "Take On Me," which the marching band has played in its field shows during football games.

The Blazers were satisfied with their performance. "Everyone did an awesome job," said Bort, "but it was still a surprise when we won, after seeing Kennedy."

After all the schools had competed, Blair's victory was announced amidst ecstatic cheers from the Blazers. "We were so tense…I don't even think [the announcer] finished saying 'Montgomery' — we basically freaked out," said Rubenstein.

The Blazers attribute their success to hard work and musical skill. "We have some very talented people in the line," said Bort, "and we still have room to expand and improve."

Rubenstein was also impressed by his compatriots' work ethic. "We are very lucky to have ten very dedicated players in our line, and that's pretty much half the battle," he said.

To commemorate the victory, the drum line was awarded a plaque that, according to Bort, will be displayed in Blair's band room.