Enrollment for the 2009 – 2010 school year has increased from the 2008 – 2009 school year, despite county projections indicating that Blair would have fewer incoming freshmen this fall. The number of freshmen increased mainly because there are more students who have Blair designated as their home school than in previous years, according to resource counselor Marcia Johnson. 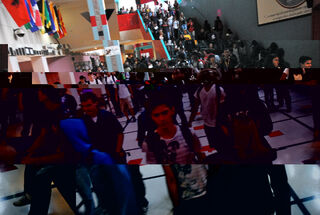 Photo: Increased enrollment for the 2009 - 2010 school year creates an unusual amount of crowding in Blair.

Photo: Increased enrollment for the 2009 - 2010 school year creates an unusual amount of crowding in Blair.

Blair currently has 736 freshmen, excluding those who are repeating the ninth grade, enrolled for the 2009 - 2010 school year, according to Johnson. In addition, Blair has 660 sophomores, 599 juniors and 585 seniors enrolled. At the beginning of the school year, many returning students noticed the freshmen class's size. "There are definitely more people," junior Jennifer Hernandez said. Sophomore Alex Rittman agreed, "It actually does seem more crowded."

Class sizes declined for a period of time due to Northwood High School's reopening in 2004, but the number of students enrolling at Blair is escalating. Johnson believes that the primary reason for larger class sizes is the number of people moving to Silver Spring and Takoma Park, increasing the number of students whose home school is Blair. "Northwood opening up helped enrollment decrease, but people keep moving here for whatever reason, and it causes enrollment to go up," explained Johnson.

Blair may also seem more crowded because the other grades are smaller in comparison, according to ninth-grade administrator Edith Verdejo. She believes that returning classes are smaller because of students who drop out or transfer schools. "For every 99 students dropping out, we have 100 freshmen coming in,” Johnson said.

Verdejo also agreed with Johnson that the freshman class is larger because more people have Blair as a home school than in previous years. "We were projected to have lower enrollment, but freshmen were coming out of the woodwork," Verdejo said.

The largest numbers of Blair freshmen come from Eastern, Takoma Park and Silver Spring International Middle Schools respectively, according to Verdejo. "We have about 100-plus kids coming from those schools, but we also have kids from Argyle, Loiederman, Newport Mills, Parkland and Sligo - probably 20 – 30 from each, for example. A lot of kids are also coming from private schools," she said.

The rise in enrollment within Blair's school district poses a problem for administrators trying to decrease class sizes. "We can only do so much," said Verdejo, "but we know that we can't jam-pack 1,000 more kids in here; we don't have the space or staff."