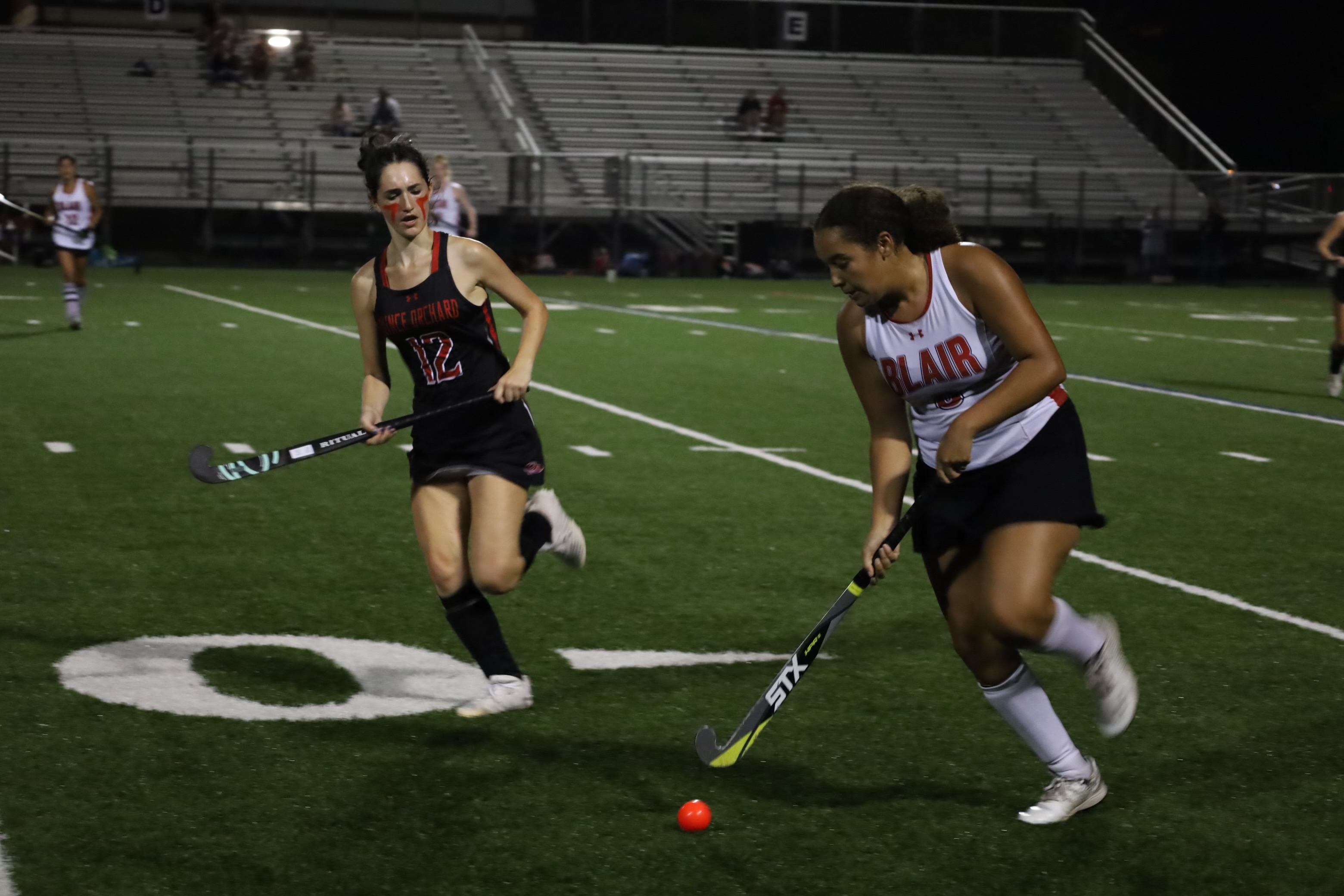 Blazers hustle for the ball

On Sept. 16, the Blazers (2-2) fought a tight match against the Quince Orchard Cougars (2-1), eventually prevailing after two tense overtime periods and an additional shootout.

The match started out smoothly. Beginning with simple exchanges in midfield, both teams seem equally matched, each advance short-lived. The Cougars kept up an aggressive offense, even pressing Blair’s defense at one point, but were quickly rebuffed as the Blazers swept the ball all the way to the other side.

The struggle for advances continued for both teams. With five minutes left in the quarter, Blair sophomore goalie Keelin Pegg triumphantly deflected a shot on the goal; two minutes later, the Quince Orchard goalie blocked one of Blair’s. The quarter ended with a score of 0-0.

The second quarter was just as tough. Blair's offense steamed through their defense, but were unable to capitalize. Both teams traversed the entire field several times in tough trade-offs, but the score remained deadlocked at zeroes. With seven minutes left to spare, a timeout was called and both teams grouped up to discuss strategy. 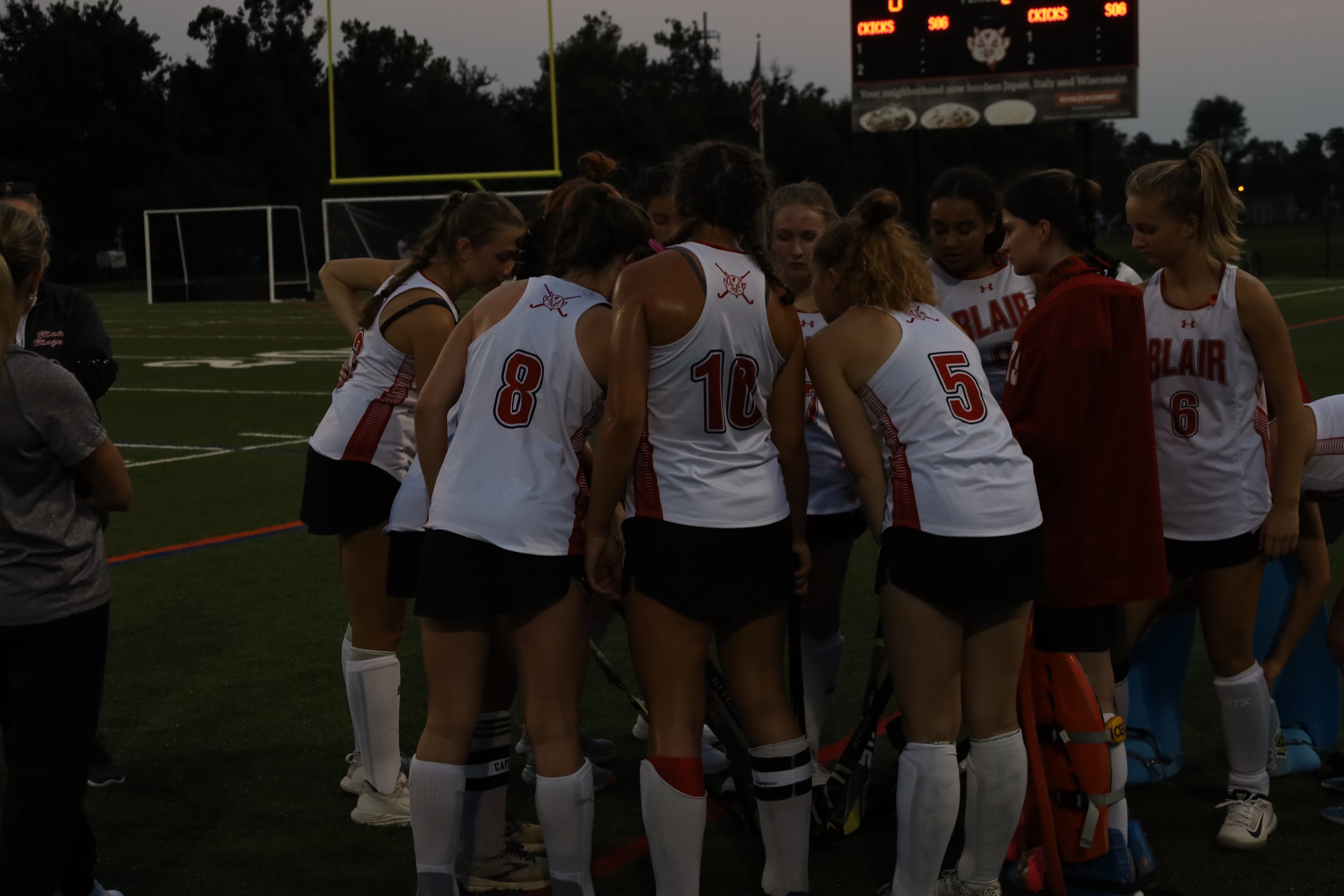 Blazers discussing their next move

Coming out of the time out, both squads returned to the field newly energized. Blair especially started off strong as they rushed towards the opposing team and quickly attempted a shot. Unfortunately, it was blocked by the goalie, and the game shifted back into a strenuous, fast-paced pattern of give and take.

In the third quarter, the pace sped up even more. The Cougars shot the ball towards the other side, but their attempts at a goal were suppressed by Blair’s defense. Soon after, the Cougars found themselves in a tough position as they triggered a penalty corner, and, after skilled passes by junior defender Laila Burege and senior captain Delia Chen, senior forward H.R. Moore scored Blair its first point.

Blair was only getting started. Several minutes later, Chen swept the ball past Quince Orchard’s defense, scoring the team another point. The third quarter ended with a score of 2-0.

The Cougars’ offense came into the fourth with a vengeance, looking to catch up to the Blazers’ lead. Only three minutes after the quarter began, Quince Orchard pushed into the striking circle. Blair’s stellar defense blocked several of the Cougar’s attempts, but one final shot got past Pegg and made it into the net.

Blair’s defense was tested further with four minutes left in the quarter. The Blazers shifted to defense as the Cougars’ offense kept possession of the ball. Ultimately, Quince Orchard managed to score off a penalty corner.

At this point, it was fair game. Both the teams were tied and looked for any opportunity to score. The ball’s possession bounced back and forth until Quince Orchard obtained two penalty corners, yet they were unable to score. Blair refused to surrender, however. In the last minute, Burege and senior captain Karis Tebo cleared away the ball, ending the quarter with a score of 2-2. 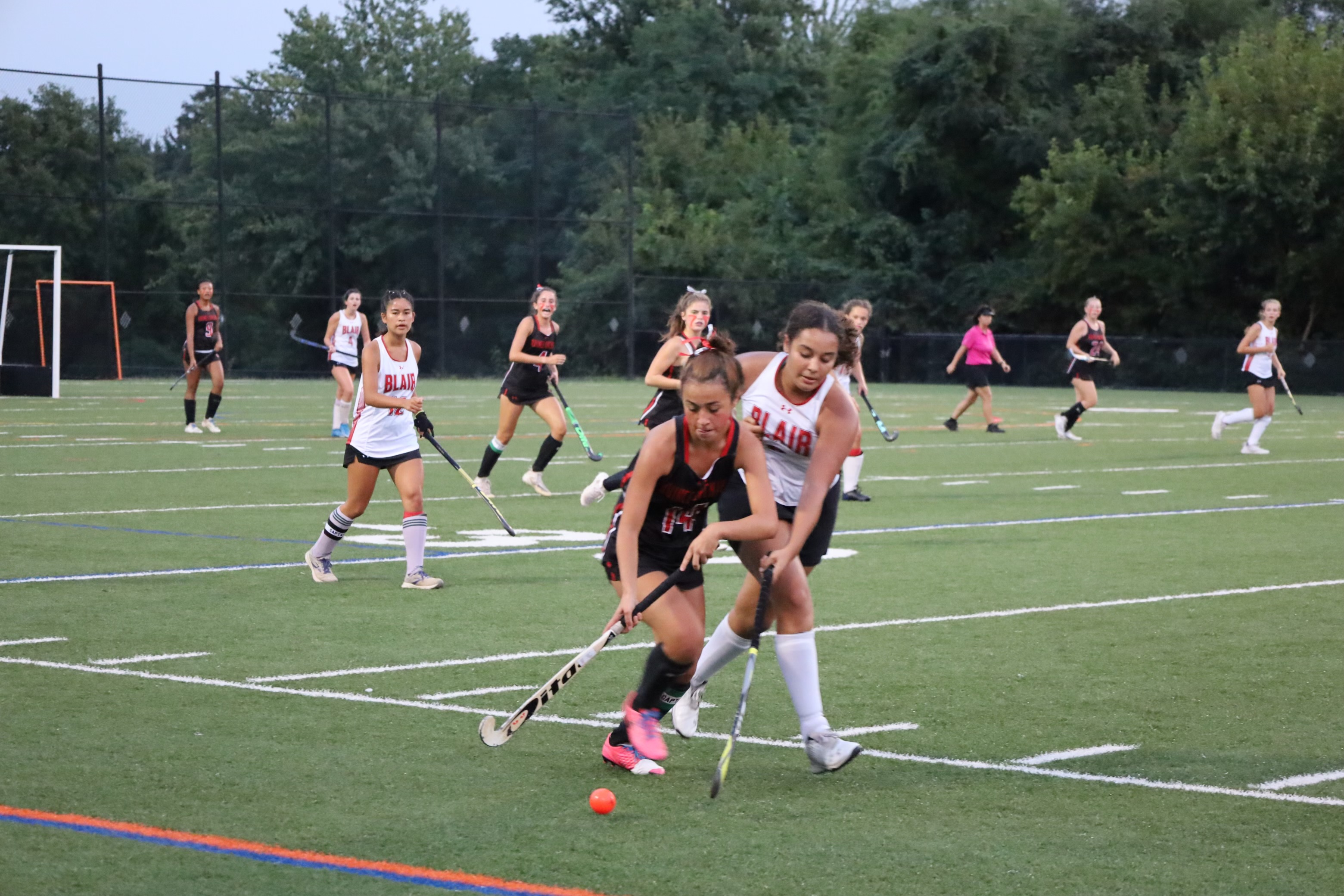 The close score was stressful for many players, but the Blazers had practiced for this moment. When asked about her performance in the game, goalie Keelin Pegg described how she was able to make so many saves. “I really, really tried to keep myself calm. That was what I was dreading the whole game, like… ‘please don’t forget these strokes,’” she said. “Then I just took a bunch of deep breaths, and I was like, ‘it’s just like in practice, we practiced it earlier this week.’”

The score was still tied, so the game went into double-overtime. With ten minutes on the clock, Blair’s drive was obvious. Senior captain Eleanor Moose made back-to-back advances towards the goal but the Cougars’ defense held up. In the second half, Quince Orchard gained possession, though the Blazers’ defense shut all advances down. The Blazers made a few more close attempts but they were unsuccessful by the end of the first overtime.

By the second overtime, the players were getting restless. Possession of the ball bounced back and forth until Chen finally took control. She swerved past the Cougars and fired the ball towards the goal several times but only barely missed. Superb plays from the Blazers prevented Quince Orchard from entering the striking circle, but time was running out. With no additional goals, overtime concluded at a draw.

To break the tie, the two teams entered a tense penalty shootout. Both Quince Orchard and Blair missed their first shots, but Blair’s spirit never wavered.

Coach Holly Stofa described what drove the team forward. “It really comes down to heart. We’re playing right now down several people," she said. "And we just played double overtime and shootouts...there’s nothing to account for it on top of skill, [finesse], and pure heart.”

Moore, the second Blazer to shoot, ripped a shot into the goal, scoring Blair a one-point lead. Three more excellent saves by Pegg against the Cougars, and the Blazers were on their fourth shot: they needed one more goal to win. After a nerve-wracking few seconds, junior forward Ayli Stoebenau netted a goal for Blair and clinched the victory. The match ended with a final score of 4-2.

Stoebenau was ecstatic over their win in such a tense game. “We’re very happy,” she vocalized. “There were a lot of emotions, [and] everyone was kind of freaking out, but our team is great [and] I’m very proud of everyone.”