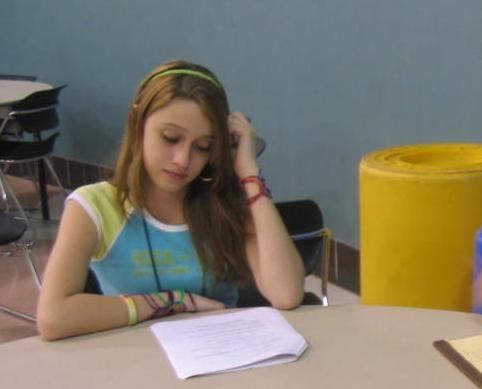 The first movie is about MySpace, according to Blair Film Club President junior Sekou Sangare. "It's about a girl who meets a guy on MySpace and he becomes obsessed with her," Sangare said. Sangare estimates the developing movie to be "TV show length."

The second movie, "Driving Captain Morgan," is Blair Film Club Vice President freshman Nic Weinfeld's independent project. Separate from the club's productions, the film is "about a high school party and all the things that revolve around it," Weinfeld said.

During auditions, Sangare was in charge of the MySpace movie, while Weinfeld managed the tryouts for "Driving Captain Morgan." Sangare asked participants to read from scripts, including a monologue from William Shakespeare's "Hamlet." Blazers auditioning for "Driving Captain Morgan" were also asked to read from a provided script, and were judged based on their unique interpretations.

The auditions attracted many Blazers who saw the auditions as an enjoyable opportunity, including sophomore Lyndsay Rini, who will be the lead actor in "Driving Captain Morgan." "It sounded like fun," Rini said.

Blair Film Club members have not started filming for either movie, although the scripts for the MySpace movie and "Driving Captain Morgan" will be completed around Thursday of next week, according to junior Olanyinka Oladiran, manager of the MySpace film.

More movie auditions may also be held in the future, along with private invitation auditions, according to Sangare. "I may talk to upperclassmen for the film or contact the crew of 'Pride and Prejudice,'" Weinfeld said.

In addition to the two movies, the Blair Film Club is also currently working on three other student-made films, including "Alfie," "15 Minutes" and a film about "a guy whose personality switches everyday," according to Weinfeld. During the Wednesday meetings, members break off into groups to work on the different movies. "We discuss as a group about conflicts, and then brainstorm," Sangare said. Upcoming meetings will focus on learning movie-editing software like Final Cut Pro, according to Weinfeld.

After they finish the movies, the club members plan to enter the movies in independent film festivals, such as MHz's 2009 Shortie Awards.