The Montgomery Blair Blazers (3-2) lost 7-12 to the Paint Branch Panthers (5-0) in a low scoring, defensive game on Friday night in the rain. The Blazers potent offense that has led the team this season was held at bay against an undefeated Paint Branch team.

Blair opened the game with an onside kick recovered by Paint Branch at the 50-yard line. The first drive of the game was marred by multiple false start and offside penalties, bringing the Panthers to the Blair 15-yard line. The Blazers defense held tough, forcing three incomplete throws. Paint Branch scored on a fourth down pass to the corner, but failed to convert the extra point, putting them up 6-0 in the third minute of the first quarter. 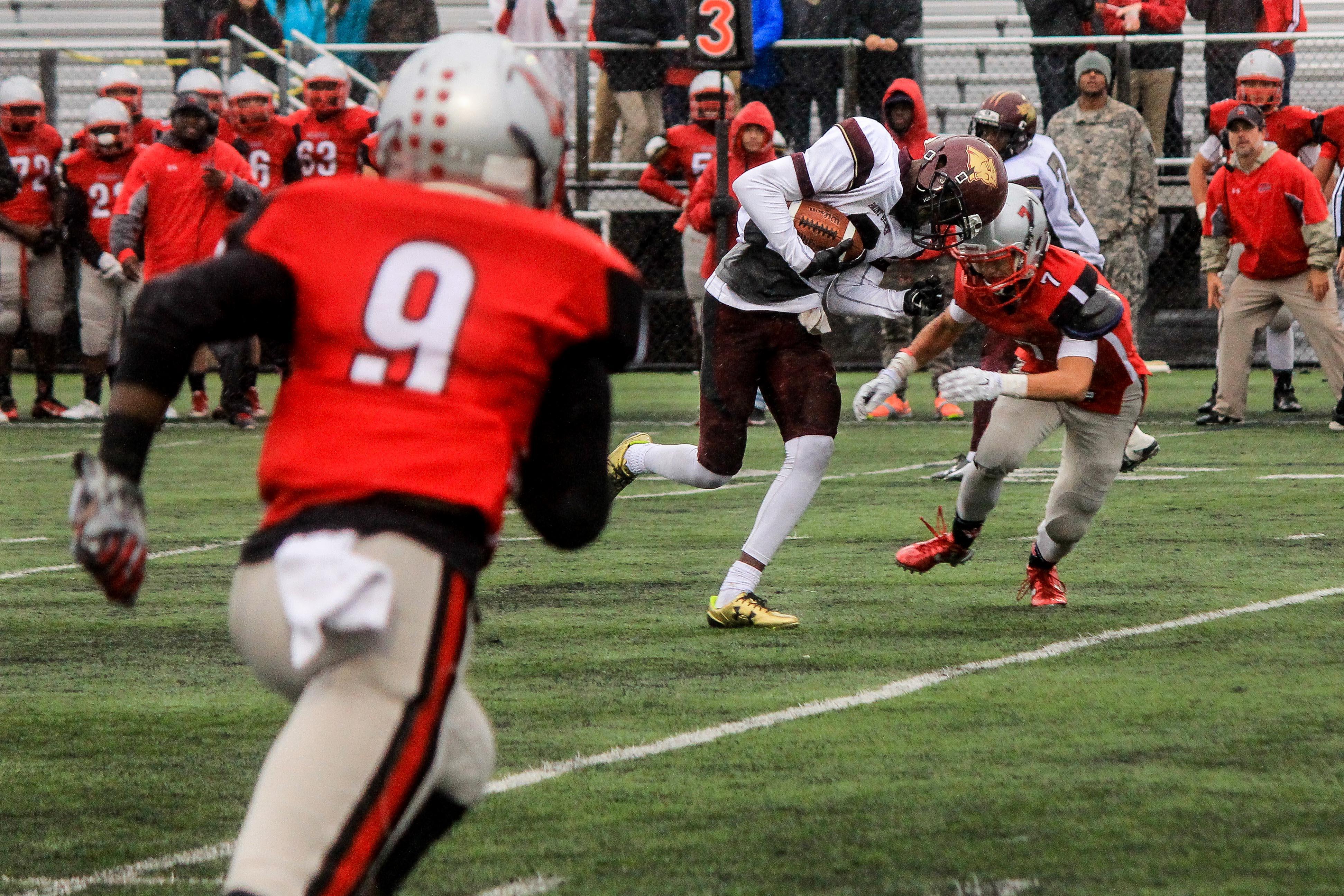 
Paint Branch tried their own onside kick, which was recovered by Blair. After three quick incomplete passes, Blair was forced to punt, giving Paint Branch the ball at the 20. The Blazers defense managed to push the Panthers back thirteen yards on four runs, getting the ball back after the turnover on downs. According to junior wide receiver Cliff Carter, tough fourth down stands like this one were what kept Blair in the game. "I think we did really well on defense. We got a couple of really key stops early on," explained Carter.

The game continued with little offensive activity until the second quarter, which found Paint Branch at Blair's five-yard line in the second minute. A sack by senior lineman David Holloway and a tackle for a loss by junior linebacker Ponce DeLeon kept the Panthers out of the end zone.

For the remainder of the half, the ball stayed on Blair's end of the field, but the defense didn't surrender any more points thanks to another sack by sophomore linebacker Rudy Ngougni.

The Blazers however, failed to muster any offense. They were sacked twice and threw one interception before the half was over. Junior running back Eric Zokouri attributed the team's offensive struggles to a lack of communication. "We need to improve on communicating more and coming together as a team, playing as a unit, and playing sound football," said Zokouri.

The third quarter opened much like the ones before it, with neither team able to overcome each other's defense. Four minutes into the half, Paint Branch was again at Blair's five yard line, but on the second down was stopped thanks to a second sack by Holloway and an interception by Zokouri.

After an interception by senior defensive back Lytton Xu, Blair found some momentum. Two quick passes for Carter and DeLeon for 12 and 15 yards finally got Blair onto their opponent's defensive half. A nine yard run by Zokouri and a quarterback sneak by junior Desmond Colby brought the Blazers to the 25. Thanks to the poor conditions, Blair opted for a ground attack, and Zokouri punched it home with a 25-yard touchdown run in the 11th minute of the third quarter. After converting the extra point, Blair took the lead 7-6. 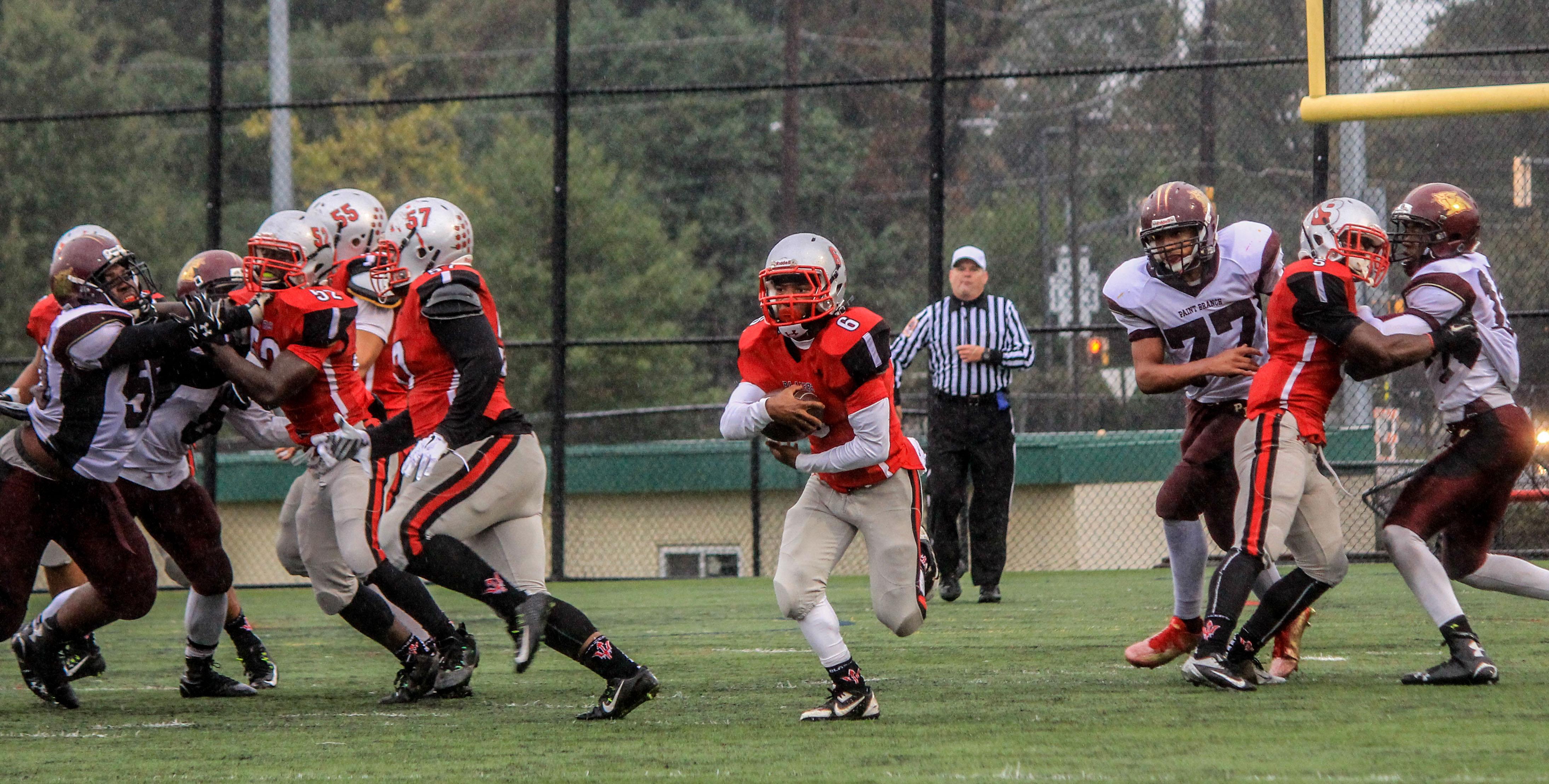 
Paint Branch got the ball back for the fourth quarter, and slowly made their way to the Blair 22-yard line. A long toss brought them to the goal line, and a two yard run gave them the lead, but a failed two-point conversion kept the Blazers within reach. With six minutes to go in the game, Blair trailed 7-12.

The offensive struggles returned for the Blazers, and they were forced to punt with two and a half minutes remaining. With the opportunity to put the game away, Paint Branch ran the ball on a fourth and six, but Holloway came through once again in the late minutes with a big stop. According to Ponce DeLeon, Blair just couldn't take advantage of their defensive success. "I know for a fact that we played good defense, we stopped them a lot, but we should've capitalized on offense more," explained DeLeon.

Blair got the ball back on their own 17-yard line, and made an eight-yard pickup on a pass to Carter, but it was too little too late. Three incomplete passes led to a turnover on downs, and Paint Branch ran a quarterback kneel to run out the last thirty seconds of the game.

Holloway, who had a big defensive game with two sacks and five tackles, said that the Blazers just couldn't make it happen in the late minutes. "We need to work on finishing games. When the fourth quarter comes, one minute left, we have to score," said Holloway.

Next week the Blazers hope to bounce back from the loss against the Springbrook Blue Devils (3-1) during the Blair homecoming game.