Blair football stomps Northwood 35-0 in Battle of the Boulevard

The Blair Blazers (1-0) soundly defeated the Northwood Gladiators (0-1) by a score of 35-0 in the annual Battle of the Boulevard rivalry game on Friday night. A 21-0 first quarter gave the Blazers a lead they would never relinquish as their stifling defense held the Gladiators' offense to just 76 total yards.

Senior running back Eric Zokouri made sure the Blazers didn't stay off the scoreboard for long as he barreled into the end zone for a rushing touchdown to cap a quick first drive. An acrobatic catch by senior wide receiver Ponce DeLeon set up the first touchdown pass of the year for senior quarterback Desmond Colby, who led Montgomery County in passing yards last year. Colby connected with senior wide receiver Clifford Carter for the score.

The Gladiators were never able to recover from the two early scoring strikes that gave Blair a 14-0 lead. "Our strategy was to get on them quick and don't let them get back up," DeLeon said of the strong start led by the team's upperclassmen. 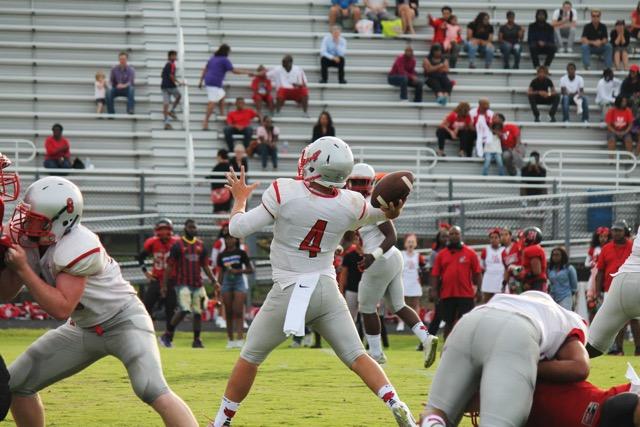 Later in the quarter, sophomore cornerback Maada Kposowa recovered a Northwood fumble, characteristic of the opportunistic Blazer defense that wreaked havoc all evening. The costly mistake by the Gladiators allowed senior wide receiver Chris Butler to haul in Colby's second touchdown of the night just before the end of the first quarter.

Blair head coach Andrew Fields gave his players the credit for their early success. "The kids were well prepared. Athletically they were the better team," he said after the game.

Despite their three-touchdown lead, the Blazers didn't take their foot off the gas for the remainder of the first half. A deep throw by Colby was picked off in the end zone for a touchback by the Gladiators during the second quarter, but that was the extent of Northwood's defensive success. Zokouri scored his second rushing touchdown of the game to give Blair a 28-0 lead before hauling in a receiving score from Colby, trucking several Northwood defenders on his way to the goal line. Sophomore kicker Ricky Morri converted his fifth extra point of the night to cap off Blair's final score.

A running clock was put in place for the final two quarters due to Blair's large lead. The Blazer offense went on cruise control, letting its punishing defense do the work. Fields let some of his reserve players enter the game in the fourth quarter as the clock wound down on a scoreless and largely uneventful second half.

Although the Blazers played conservatively in the second half, several players racked up impressive stat totals in the blowout win. Eric Zokouri gashed his way through the Gladiator defense for 203 rushing yards and three total touchdowns.

Despite the dominating triumph against their rivals, the Blair players downplayed the victory. "Beating Northwood was an expectation," DeLeon explained.

Next matchup: Blair aims to keep their undefeated record alive as they take on the Bethesda Chevy-Chase Barons (0-1), who lost their season opener to Sherwood, at home next Friday at 6:30 p.m.

Statistics compiled from MOCO Football via Coaches/Washington Post and from Hudl.