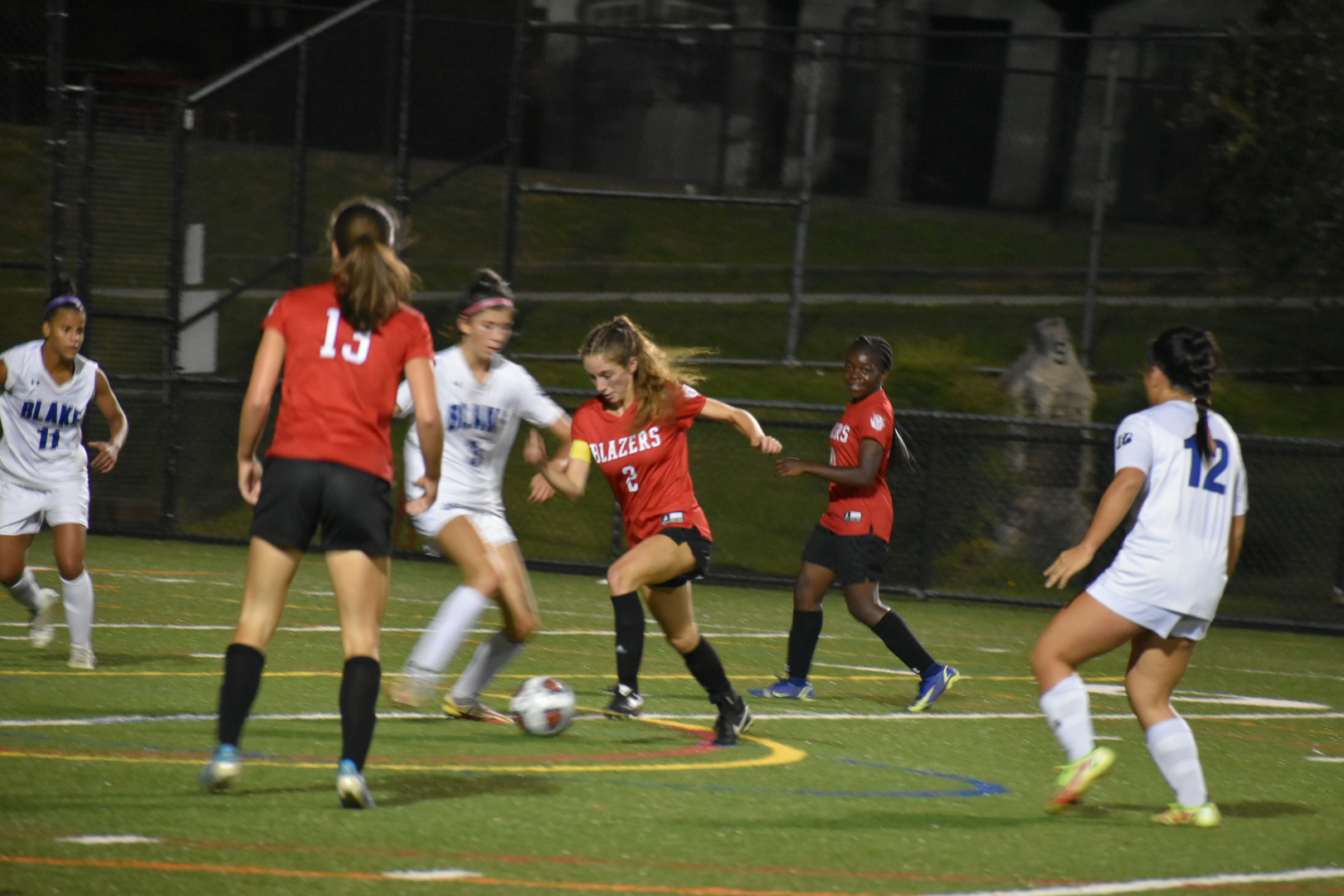 Photo: The Blazers controlled possession throughout the game.

Photo: The Blazers controlled possession throughout the game. Photo courtesy of Jose Ortellado.

Blair demonstrated its offensive prowess early, starting the first half strong with a powerful goal from junior forward Sally Peyrebrune. The Blazers dominated the field offensively, keeping up constant pressure on the Bengals’ defense. Precise passing allowed the Blazers to keep the ball in their possession, preventing Blake from getting a chance to push forward on offense.

The Blazer’s control of the ball allowed them to make multiple attempts at Blake’s goal in rapid succession. After a few close misses, Senior Magdalena Goles pushed through Blake's defense and scored. Blair took advantage of the Blake players' lack of communication and coordination, which allowed them to push forward through Blake defense.

The Blazer’s defense shut down the few offensive pushes Blake was able to put together. Blake’s downfall came from their lack of movement towards the ball and failure to coordinate passes. Blair, on the other hand, greatly improved their passing and follow through from last game.

Strong fast pushes from offense, and power kicks from defense players and the Blair goalie Alegria Martins kept the ball on Blake’s side for the majority of the game. The first half ended 2-0 in Blair’s favor. Going into the second half with a steady lead against Blake, they continued to dominate both offensively and defensively.

This was a majorly offensive game, a major improvement from Blair’s first home game, where they lost to Quince Orchard (1-2). Sophomore Harriet Ngwatung noted the improvement from the start of the season. “I feel like we didn’t start off strong, but since then we’ve… played and we’ve gotten better,” Ngwatung said.

Blair kicked off the first half by immediately stealing the ball from Blake’s possession and rapidly advancing up the field. This play resulted in a quick goal by Senior Chloe Peyrebrune, pushing up the score to 3-0.

The Blazers kept Blake on their toes with skilled, precise passing. Taking advantage of the Bengals' poor coordination, the Blazers outmaneuvered Blake and, in doing so, pushed forward without much struggle. 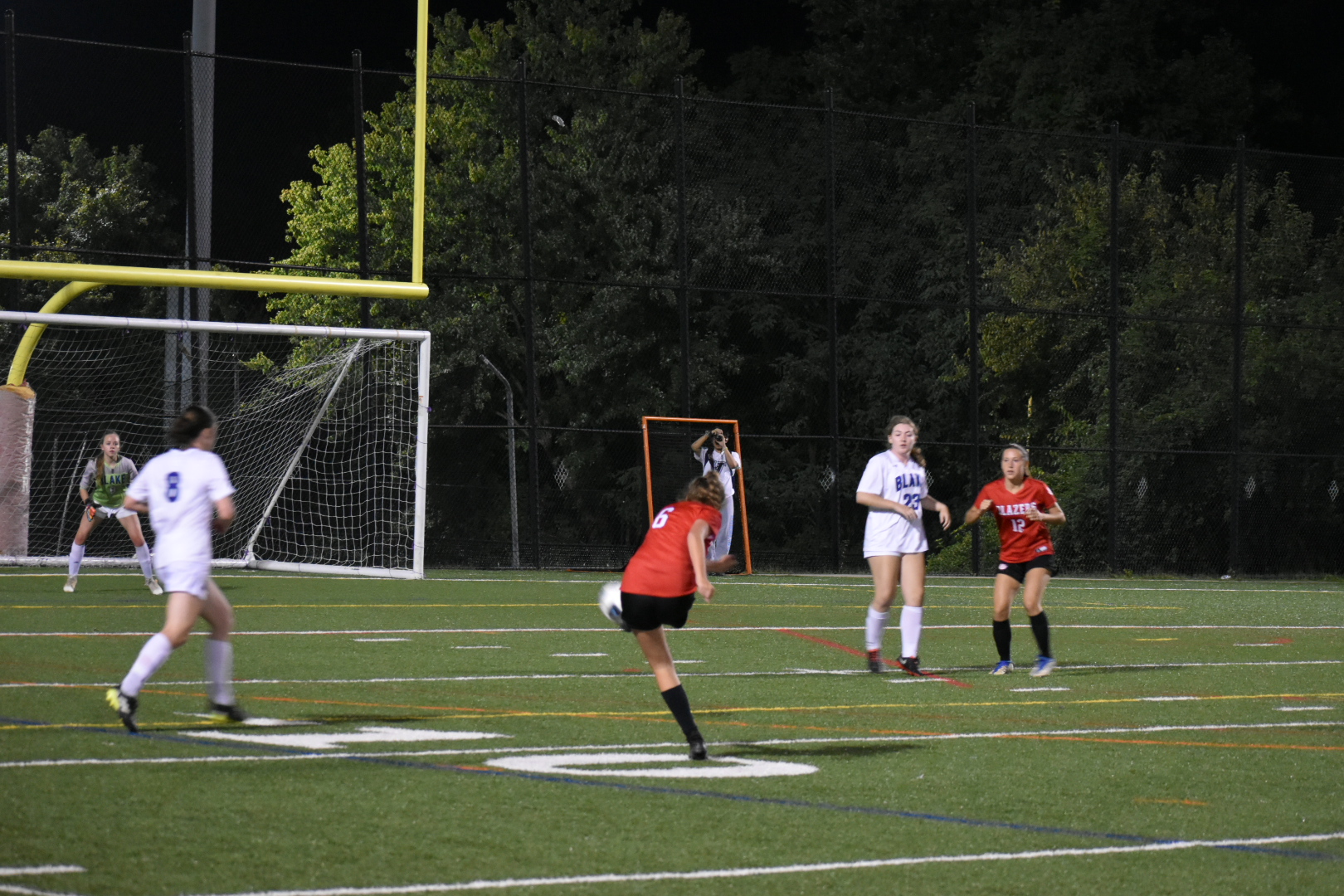 Photo: The Blazers were relentless on offense, scoring five goals

After pushing past Blake's defense, Freshman Meron Koro attempted to score, shooting a low flying ball towards Blake’s goal. The Blake goalkeeper got a hand on the ball, but fumbled the catch, allowing Blair to score yet another goal, now in the lead by four.

Blake was fast, but their individual pushes were not fast or strong enough to push past Blair’s defense. Their lack of teamwork cost them, and allowed Blair to exert their power over the majority of the field. Only a couple minutes after Blair’s previous goal, Junior Bia De Silva scored another, lengthening the Blazers' lead against the Bengals to 5-0.

As the end of the second half approached, the Bengals pushed forward offensively, desperate to get a goal. Ultimately, the Blazer’s solid defense rendered these attempts futile. With less than fifteen seconds on the clock, the Blazers regained possession of the ball, and pushed forwards to the goal, but before an attempt could be made, the buzzer rang. 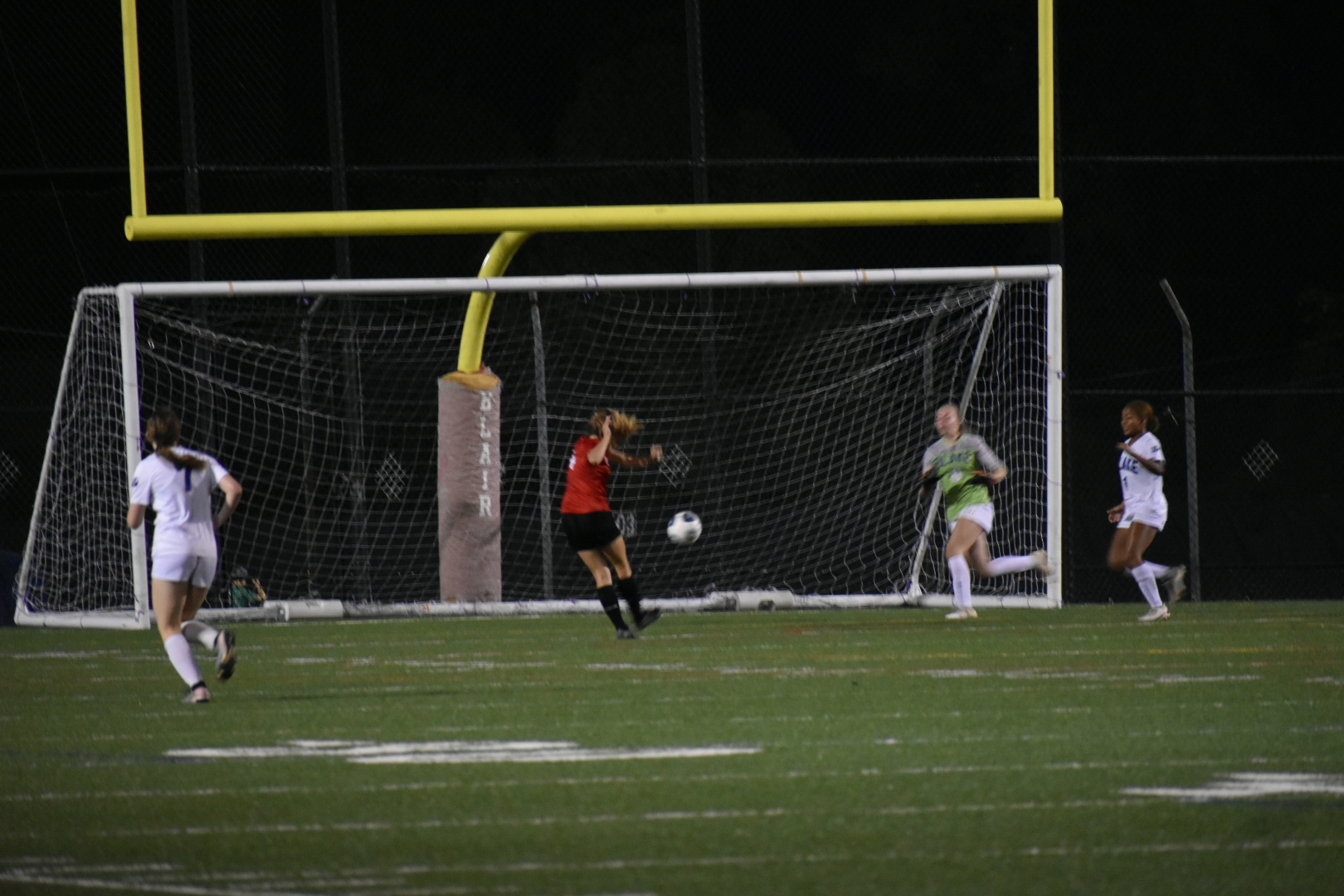 Photo: The Blazers were dominant throughout the game, thrashing the Bengals 5-0.

Photo: The Blazers were dominant throughout the game, thrashing the Bengals 5-0. Photo courtesy of Jose Ortellado.

Even after the decisive victory, Da Silva reported that the Blair team still needs to work on their teamwork. “Making sure that we’re being aware of where [we are] on the field, and getting used to each other’s playing… will really help our game,” she said.

Blair head coach Robert Gibb confirms that the team will continue to improve. “It's just getting better at what we’re doing well, we’re already doing it well, we can always be better. Cleaner, crisper, sharper, that’s where we’re going,” Gibb said.

Blair’s next home game is on Tuesday, Sept. 27 against Wheaton. Tickets can be found here.