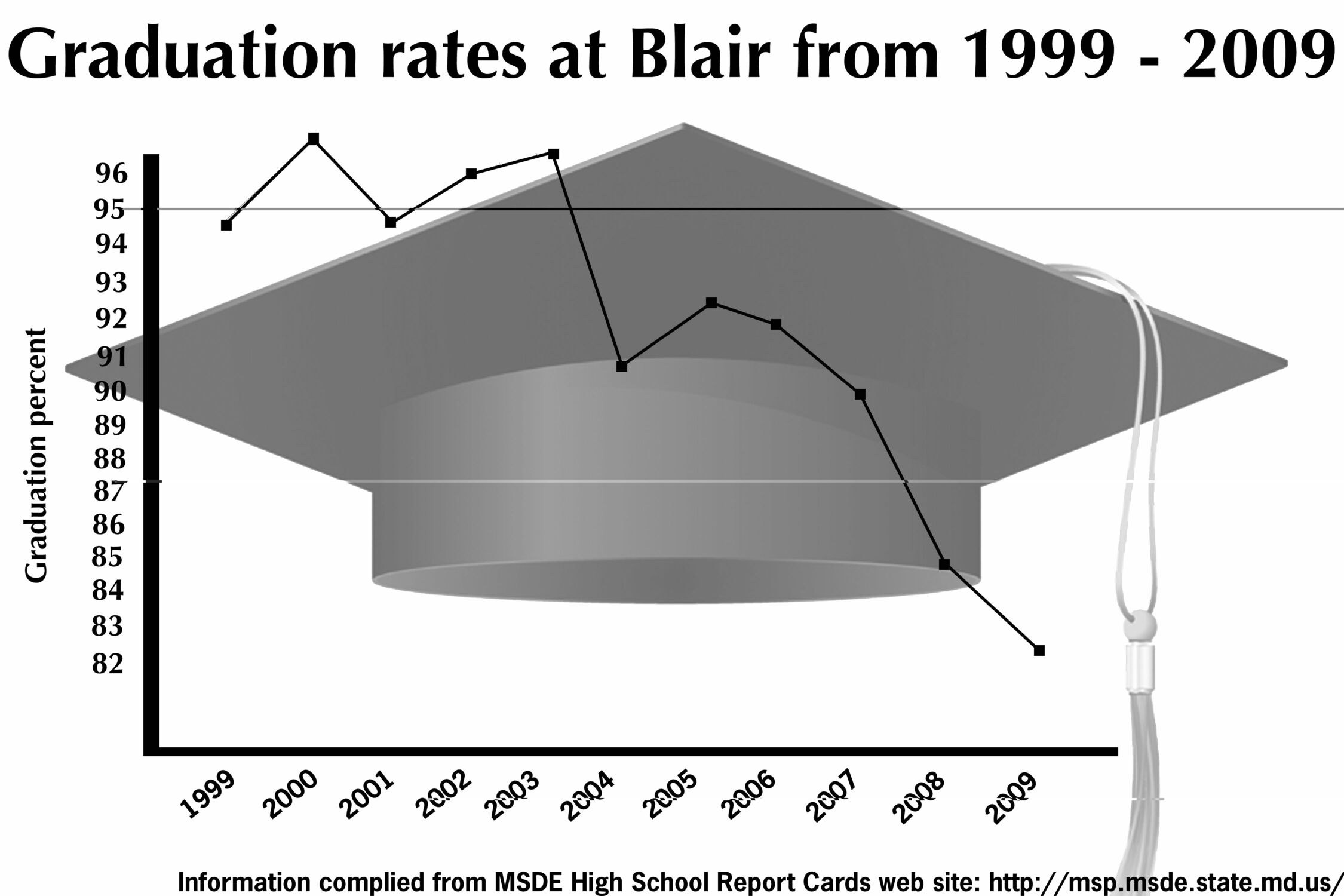 Photo:
Principal Darryl Williams believes one of the major factors that prevents students from graduating is a dearth of motivation. "I think it's lack of interest, lack of success, primarily in the earlier years," he said. Resource counselor Marcia Johnson said that the most common reason for unsuccessful graduation is failing one, two, or sometimes three classes. According to Johnson, 33 Blair seniors did not graduate last year, all of whom were enrolled in classes in May and came to class. Of these 33, only one didn't graduate because of Student Service Learning (SSL) hours. No students failed to graduate because of their High School Assessment scores.

Chris Cram, a MCPS public information representative, said that MCPS has been trying to monitor the graduation rate within this specific demographic.

Shirley Brandman, president of the Board of Education, added that MCPS needs to more closely evaluate the barriers which new immigrants face, which may cause them to give up on school. "Clearly [this demographic] is something we need to probe more carefully," Brandman said.

However, Johnson asserts that graduation rate statistics on the Latino student population may be slightly misleading. "There were some international students that decided to stay an extra year, it's not so much that they didn't make graduation," Johnson said.

Likewise, Williams stated that the decline in graduation rate may have resulted from misleading data. "We weren't clear about how that was calculated," he said. According to Williams, the MSDE calculations included high school dropouts from the 2006, 2007 and 2008 school years.

Williams said that the Blair administration was unsure about where these dropouts may have gone, meaning that they could have possibly graduated from a different high school.

According to Brandman, Maryland schools are now required to count students that have transferred their schools in their graduation rate statistics.

Despite the possibly misleading nature of the MSDE report, Williams said that Blair is still taking the decline seriously. "There's been some concern. I don't think anybody likes decreasing statistics," Williams said.

According to Williams, Blair plans to improve its graduation rate through giving help to at-risk students, including an ongoing effort by the administrative team to meet with at-risk students and allocating more resources for helping freshmen.

According to Johnson, these efforts to improve graduation rates are not new to Blair. "[We're doing] basically the same things we've done in the past," she said. "Tutoring, reviewing report cards, talking to seniors about SSL hours, whatever we need to do to assist students."

Cram stated that MCPS is also sticking to its preexisting improvement methods. "We already have [student supports] in place. We're working to make sure all students are ready for college and their careers," he said.

Despite this decline, Cram remains confident in the abilities of Montgomery County's schools. Cram stated that, among large school systems, MCPS's graduation rate is very high.

Brandman acknowledges that improvement is still needed throughout MCPS. "Our target is a 100 percent graduation rate," she said. "We have a commitment to make sure we're reaching out to every student to work with them to figure out how they can graduate."