Parents are entertained, informed and fed

Blair's annual Back-to-School Night was held last night from 7 - 9:30 p.m. Welcomed by a multitude of balloons, voices and multicolored decorations, parents fell victim to the usual parking delays, but Back-to-School Night began and ended on time. The two-and-a-half hour information session incorporated not only the highlights of Back-to-School Nights past, but also featured new organizations and events, including a visit from fourth district representative Congresswoman Donna Edwards. 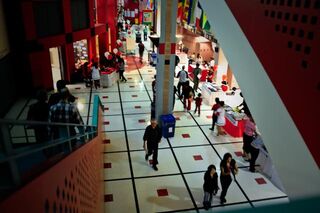 Photo: Parents and students browse booths set up by Blair's multitude of different clubs and activities.

Photo: Parents and students browse booths set up by Blair's multitude of different clubs and activities.

Parents were greeted by two rows of informational tables lining the halls of Blair Boulevard. Many groups, including after-school clubs, each of the five academies, the Communication Arts Program (CAP), the Magnet program, various fundraising teams and representatives of the administration displayed their wealth of flyers and information. A table of experts introduced parents to the Seven Keys for College Readiness and provided tips and further information on the subject of college preparation. For the first time, yearbooks were sold in advance via computers and the SGA successfully sold their entire stock of pizza for the night. Entertainment for the night included performances from Blair's InToneNation group, Chamber Choir and Jazz Band.

Principal Intern and Back-to-School Night coordinator Myriam Rogers believes in nothing more than getting parents assimilated to the Blair community and lifestyle. "I want to give parents and guardians an opportunity to get a feel for Blair," she said.

When parents arrived to their children's advisory period they viewed a video formally introducing them to Blair's staff and students. After the video parents were given their child's schedule and were sent to their first period. Teachers mainly followed the same formula when introducing their class to parents. First, teachers would give their contact information and an introduction to the subject and its syllabus. Then, teachers listed expectations and rules they have for their students.

This year's Back-to-School Night was met with no discernible complications. AP Language and Composition teacher Michele Gross summed up the night with her amiability toward parents that arrived. "I like seeing parents that are interested in their children's school," she said.

Amir Gorjifard. Son of Mahmoud Gorjifard and Nahid Gorjifard, Amir can be best described by two words: gorgeous and modest. His two loves in this world are his two guitars - his acoustic guitar, E. Roosevelt (he was forced to add the E. due to an overrated … More »