Poets and students connect over event

Blair held its first poetry slam during Blair Fair on April 28 at 6 p.m. in the library. The winners were seniors Jonah Gold and Sarah Janesko and freshman Jumi Bello. 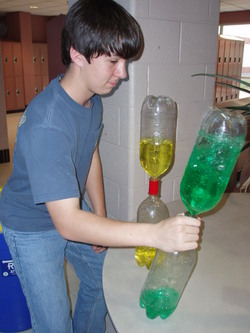 Media center specialist Ilene Catzva had the idea to hold the slam. A year ago Catzva mentioned that Piney Branch Elementary School, where she previously worked, had a Poet-in-Residence. For the past few weeks Blair has had poet Carol Peck visit classes and teach students about various aspects of poetry. The concept for the poetry slam came from Peck's presence. Catzva said that she and her colleagues "were trying to think of a way to celebrate [Peck's] two weeks."

Also at the slam was poet Omari Daniel who has published two books, "Wrapped in Black" and "We Fish." Daniel is currently a teacher at Blake High School and has written many poems about his teaching experience.

"Poetry builds bridges between one person and another," Daniels said. Just like Daniels, Peck feels that communication and connection is key in poetry.

"Poetry helps us connect with ourselves and the world," she said.

In preparation for the poetry slam, the library was decorated with candles, flowers and dimmed lighting. In front of the tables was a stage with colored lights, courtesy of Stage Crew.