Blair's Students for Global Responsibility (SGR) has launched a new recycling program in response to the failing grade Blair received in recycling from Montgomery County last year. The new program adds more collection bins and establishes a way to supervise all the recycling that occurs through a committee, according to social studies teacher and SGR sponsor George Vlasits, program head. 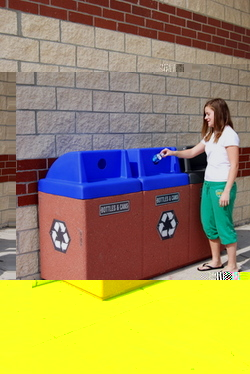 According to Blair's business manager James Funk, Montgomery County judges schools in recycling through a physical inspection of the trash coming out of the building as well as a review of the building. Blair failed to adequately meet these criteria and was therefore given a failing grade by the county.

Vlasits cites many flaws with Blair's previous recycling strategies that he intends to fix. The primary issue was contamination with trash in recycling bins, which rendered the recycling useless. This problem has been particularly notable in paper recycling, and Vlasits's agenda includes a reduction of such waste. "I want to put lids on the top of all paper recycling bins to reduce the amount of contamination," he said. "Not eliminate all contamination, but reduce it."

In previous years, poor leadership has been a problem with the recycling program, according to Vlasits. "The building services staff was not properly informed or supervised in collecting and disposing of recycled materials," he said. Vlasits expressed such great disapproval of last year's program that he felt Blair did not have one. "The failing grade was well deserved. We essentially never had a recycling program." To remedy organizational issues, Funk is planning on holding a training session for the building services staff.

Vlasits was chosen to head the program because he was in charge of handling recycling at Blair seven years ago. To assist him, a committee composed of teachers, students and building services staff - led by media specialist Lisa Hack – has been commissioned to supervise the process.

Future plans for the program include implementation of recyclable or reusable trays in the cafeteria and ways to prevent bins from becoming contaminated with trash. But overall, the goal of the new program is to change Blair's recycling attitude. "Really what we are trying to do is to create increased awareness in recycling," said Vlasits. "A change in the recycling attitude from students and staff would really benefit Blair."