Despite mounting a two score comeback in the third quarter, the deficit faced by the Montgomery Blair Blazers was too steep in a 48-17 loss in the first round of the playoffs to the Quince Orchard (QO) Cougars on a windy Friday night.

The game started badly for the Blazers, with the tough Quince Orchard defense forcing Blair to punt on the first drive. On the drive Blair lost one of their starting wide recievers as well. He was trying to get open for a pass, when he threw his defender off of him, and was forced to leave the game.

But Blair bounced back from the bad first drive to force a QO fumble. Junior quarterback Desmond Colby threw a long pass to receiver Cliff Carter to set up the first score of the game, a field goal by Blair place kicker Brian Guzman.

After scoring the first points of the game, the Blair defense could not stop the strong running game of the Cougars. "When you're playing a really good football team, they're going to score. There's always peaks and valleys in every football game, and so they scored and we were hoping to score back, but we couldn't quite get over that hump," said Fields.

The Cougars followed Blair's field goal with a long drive that ended at the goal line. The Blazers defense held strong for three downs, but the bruising QO halfback proved too much and punched in the score on fourth down. The Quince Orchard offense scored on their next three possessions, all ending in short touchdown runs. After the third touchdown, Blair muffed the ensuing kickoff, and were forced down at their own one-yard-line. Colby and running back Eric Zokouri combined to march the Blazers all the way to QO's 34-yard-line. But Blair went for it on fourth down and were stopped by the strong Cougar defense. The Blazers defense finally stopped Quince Orchard, but there was too little time for Colby to lead the offense toward the end zone and the Cougars had a strong 21-3 lead going into halftime. 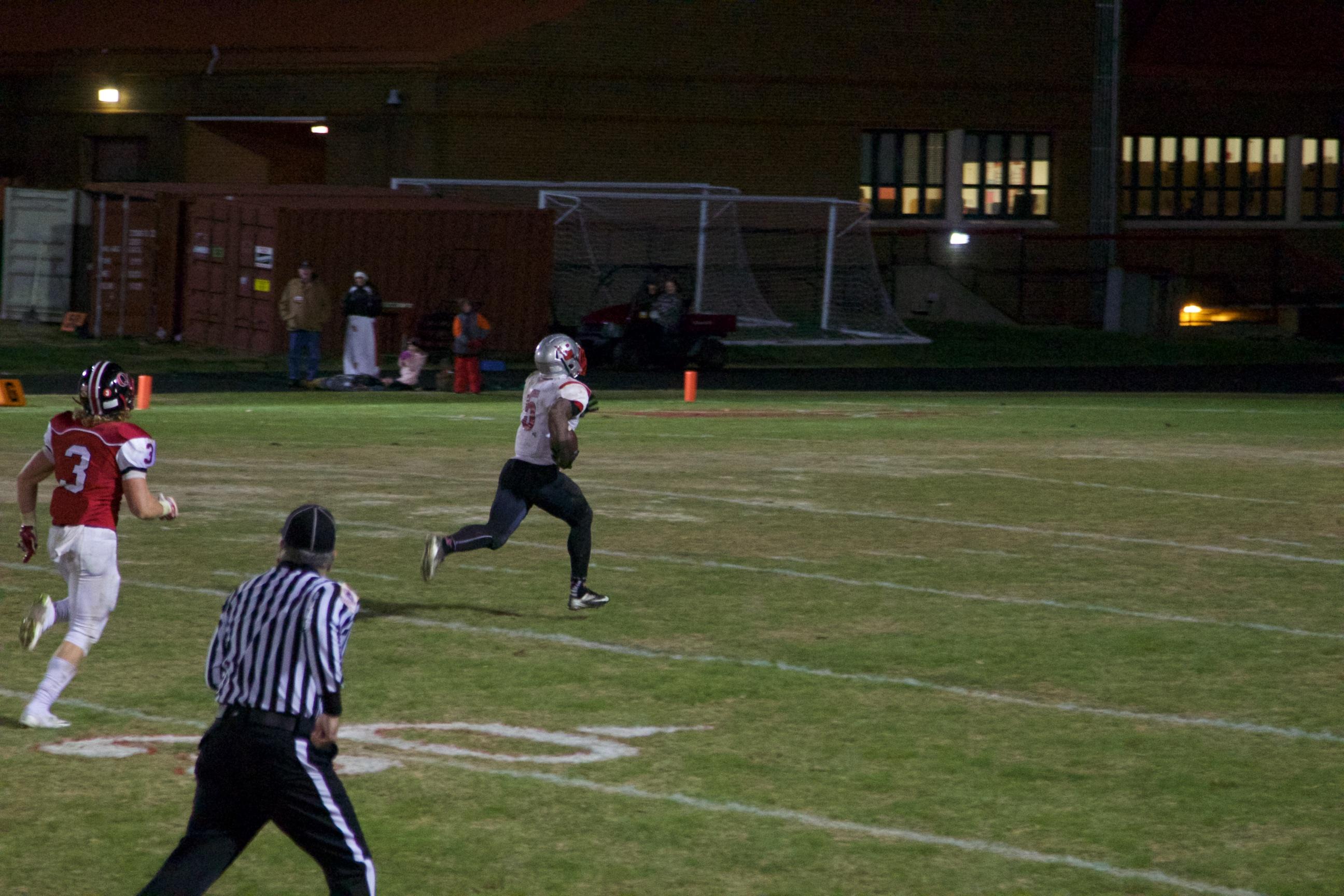 Photo: Eric Zokouri runs for a long touchdown in the third quarter.

Photo: Eric Zokouri runs for a long touchdown in the third quarter.

Blair allowed a big run by QO to start the second half, not stopping the running back until inside the ten-yard-line, where the Cougars forced a short pass into the end zone. "The gameplan was to limit their running game and go toe-to-toe and see if we could stay with them. As always our kids fight, but Quince Orchard's a great team and a great program," said Fields.

After trading punts, the Blazers offense woke up from its first half slump. The game had sped up dramatically, with the teams combining to score four times in less than two minutes. Zokouri broke off a huge run, and Carter lept over a defender to make a catch just short of the end zone, where Zokouri got the ball again and pounded it up the middle for the Blazers first touchdown of the game. But the defense had no answer for the rushing attack from Quince Orchard. Their back broke a 60-yard run to put them up by 24. Back on offense, Colby hit Zokouri on the sideline for a 72-yard catch and run to cut the lead back to 17, but again the defense could not stop the running game, which pounded in another rushing touchdown.

Blair could not get back on the board in the fourth quarter, and held off the strong rushing attack from QO for most of the quarter. Their best chance came in a long drive that spanned two quarters and six minutes, but ended in disappointment. The QO defensive back picked off the Blair pass in the end zone, stopping the last real scoring threat from the Blazers. The Cougars tacked on another rushing score at the end of the game as well to complete their 48-17 victory. "In the playoffs, everybody's really good, so the difference is you're always playing a really good football team, and even the worst teams in the playoffs are really good," said Fields.

For the second straight year, Blair made the playoffs, led by the seniors who have played for the Blazers these last two years. As for next year, Fields is excited to move forward and see the talent behind the current senior leaders. "We have a lot of players coming back, and we're very excited about that. Next year should be our strongest team yet."