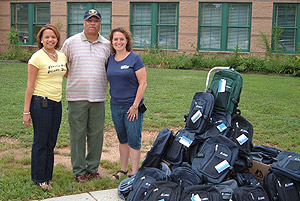 Johnson has been working in MCPS for over 20 years. She began her career in Montgomery County after graduating from college as a student teacher and she eventually became a teacher, student counselor, administrator and later an assistant principal at Springbrook High School. She has held her current position of principal of Takoma Park Middle School for five years.

One of Johnson's primary goals is to maintain academic success, especially in an already competitive school like Blair. "I see Blair as a high-performing high school with a rich tradition of academic excellence," Johnson said. "I'm very motivated to maintain Blair's reputation."

Johnson's plan for the beginning of her tenure at Blair spans three years – one year for understanding Blair's system and ways of operating, one year for implementing new programs and one year for examining the results of those programs.

One program Johnson hopes to form is a Student Leadership Group, a collection of students from every segment of Blair's population to represent their interests to the principal. By maintaining this group and its diversity, she hopes to ensure that every student in Blair has a voice. "This group would be very carefully selected, and not only in terms of ethnicity. I want to make sure that there's a student from every feeder middle school in it. Also, I hope to work with a representative parent group as well. That way it won't just be the same ten people with the same ten ideas," she said.

Johnson also hopes to start a grant committee at Blair to generate funds for programs that would otherwise be cut. She has already successfully implemented this program at Takoma; the school received a grant to extend the curb in its parking lot to eliminate the safety hazard for student pedestrians.

Although Williams did not participate in selecting his replacement, he and Johnson have worked together in the past on a countywide initiative to boost math scores on the MCPS standardized tests. Williams suggests that Johnson should take the time to become familiar with Blair's atmosphere. "My advice to the new principal is to meet many stakeholders and attend many events and programs to learn about school culture," he said.

According to Johnson, her goal is not to come into Blair and make big changes right away, something she has learned from her summer occupation of training new principals. "One challenge that shows up a lot is a principal that goes in and tries to put their mark on everything. I really believe that you have to respect the work done by past administration," she said. She also stressed the importance of community interactions. "I know that there's a certain amount of time that I have to spend chained to my desk, but I like to be out and about."

Johnson is determined to help students reach their potential. "Parents send their students to high school to graduate," she said. "I take that responsibility very seriously."