Next year, Darcy Sloe is teaching a neuroscience class that has never been offered at Blair before. The class will go over topics such as brain development, memory and language and so much more.

Sloe doesn’t plan on doing excessive testing and exams in her new class. Instead, she sees the class being project based, “I envision it as more projects, research, experimentation and lectures rather than tests.” She plans on giving her students choices on what they want to learn, rather than teaching straight from the book.

Neuroscience is typically offered in college because of the intensity of the class. Sloe recommends that students interested in neuroscience should be acquainted with biology before taking the class.

Sloe has many creative and fun ideas for the class. She plans on doing a variety of experiments, labs and brain dissections. One of her most unique ideas is purchasing a neuron spiker, a machine that can can control the movement from someone else’s arm with input from another person’s brain. 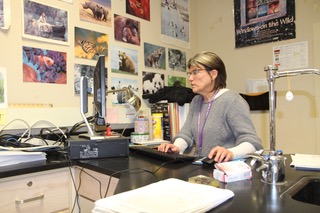 Photo: Sloe will teach neuroscience in the coming school-year.

Photo: Sloe will teach neuroscience in the coming school-year.

Sloe currently teaches genetics, magnet biology and on level biology. After many years of magnet students requesting a neuroscience class, she eventually gave in, “All of the time I've been teaching magnet classes, students have asked me for a neuroscience class. This has been going on for about seven to eight years and so finally I decided to do it.”

Sophomore Maya Richardson-Temm explained how she became interested and enrolled in neuroscience, “I had a lot of fun learning biology and psychology so neuroscience seemed like a perfect combination of the two.”