Today, school security guards put Montgomery Blair High School on lockdown beginning at the start of the school day following an attempted robbery at the Shell gas station on the corner of University Blvd. and Colesville Rd. The school remained on a high-alert shelter until around 1:30 p.m., as the suspect had not yet been caught.

The lockdown began before 7 a.m. "We were told to get to our classrooms as quickly as possible to open them and then receive students," ESOL teacher Jody Gil stated. Students were encouraged to find a safe location. "An announcement came and said to go into any classroom near you, so we went and just sat there," freshman Jigyasa Dahal recalled.

Montgomery County police and school security guards escorted students into the school building as they arrived, and teachers brought kids into their classrooms, auditorium or gymnasium. "We just started pulling in students from the hallway as the buses started arriving. We were just trying to get them in as quickly as possible," Gil said. 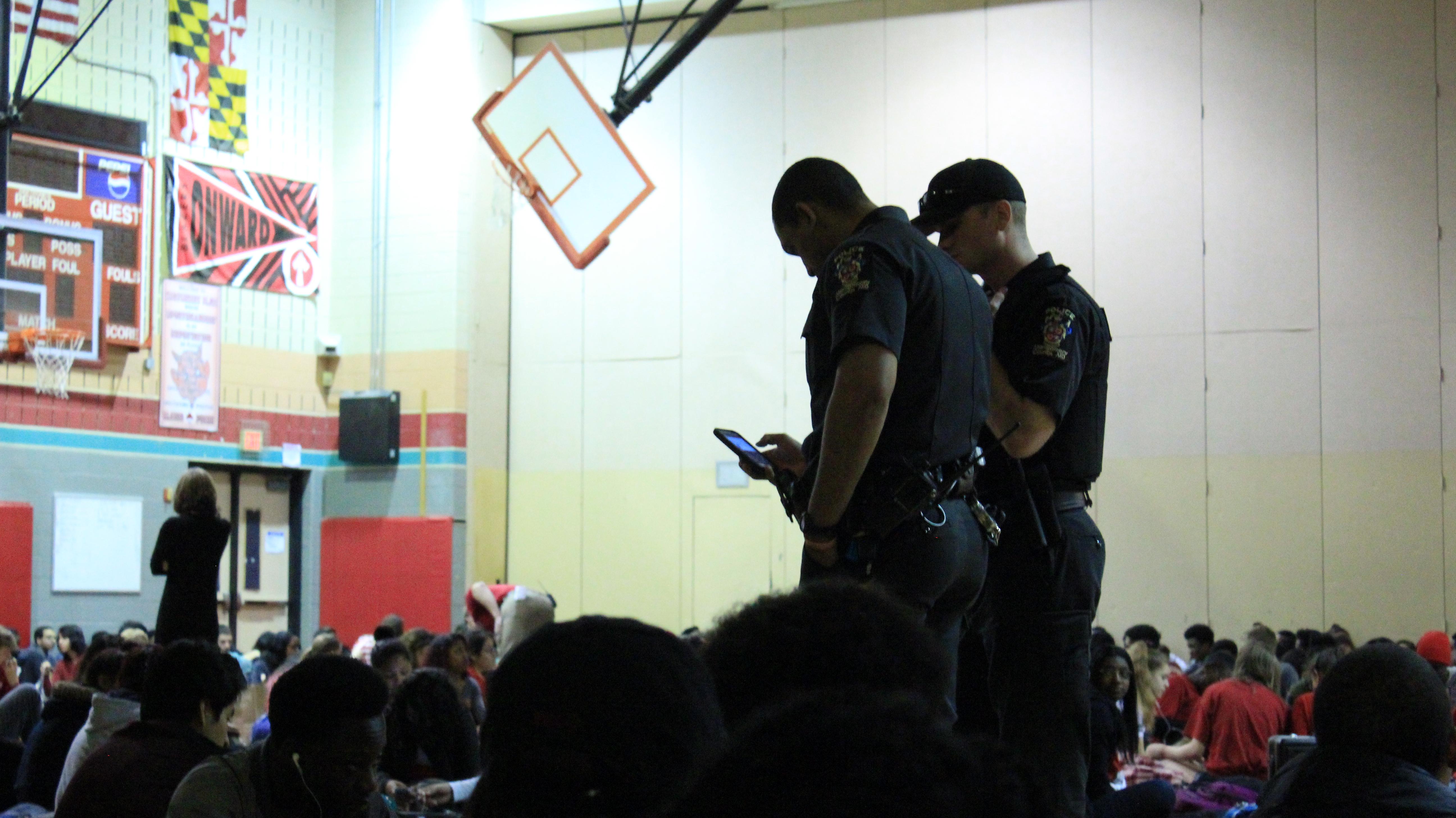 Once in a safe location, students were instructed to sit in silence with the lights off. "Everyone was kind of talking, freaked out, and we sat there for a while," freshman Adeola Vassall said. Once police had swept the school and confirmed the security of the building, classes were allowed to turn the lights on around 8:20 a.m., but few classes began work. Police and security guards also checked some students' backpacks, reportedly searching for a handgun. Students read, played games on their phones, chatted or slept. "Some people were panicking and calling their parents and stuff, but mostly people were calm," Dahal said.

Some teachers told their students what was going on, while other students got information via their phones. "Through social media and the use of their cell phones, everyone found out what was really going on," Gil noted.

Many students—and their concerned parents—noted that they would have preferred to be informed by the school. "All they told us was 'go to class,' but they didn't tell us the story. They just kept saying 'we're in a lockdown, just sit quietly.' It was really scary," Periz said.

Administrators provided some information over the announcements, but details regarding the situation were unclear. Vassall said she thought more information would have improved the situation. "That way, people aren't making up their own stories," she said. "If you really want to keep us calm, you should be honest about what's happening." However, Gil was supportive of the decision to hold onto the information. "Obviously, we want to know what's going on, but at the same time I know why they'd want to protect it until we find out for sure what was going on…so we wouldn't incite panic," she noted.

At around 9:40 a.m., students went to their third periods, and classes commenced as usual around 9:55 a.m. However, students and staff were not permitted to leave the school building at any point, and security guards and administrators monitored school entrances as well as hallways. At 1:34 p.m., Principal Renay Johnson announced that the shelter had been lifted, though police remained on campus until the end of the school day.

Overall, staff said that they felt the lockdown had been effective and smooth. "Because we're so used to practicing this, everyone was pretty calm, so when we did find out, no one really freaked out, so I think they did the right thing," Gil explained. "I think everything went as it should with a school this size and what's going on in the community."

A gas station employee was reportedly injured during the attempted robbery, though his injuries are not thought to be life-threatening. Police initially said that the victim had been shot, but later confirmed that he had been hit in the head with a gun.

Police said they received a report about an attempted robbery at 6:35 a.m. this morning, followed by a report of a shooting. According to the Washington Post, the police are looking for a "one suspect, a white or Hispanic man, about 5-foot-8 or 5-9 wearing a black jacket and black pants, who was on foot when he left the gas station."

Due to the shelter in place, the pep rally scheduled for this afternoon has been postponed to an unknown date. Athletic events have also been altered, and the school requested extra police to supervise the games as investigation continues. The JV softball game at 3:00 p.m. was cancelled. The bus to the JV baseball away game at 4:00 p.m. was cancelled; athletes will ride to the game with coaches and parents. The boys' tennis matches will be held at Einstein at 3:30 p.m. The varsity baseball and softball home games at 4:30 and 5:00 p.m. respectively will both be held as planned.