Trend credited to reopening of Northwood 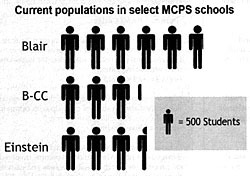 Photo:
The student population at Blair has declined to its lowest point in six years because of shifting county demographics and the reopening of Northwood in 2004, but data suggest the trend may be temporary.

The Blair population reached 2,959 as of Sept. 19, a decrease of about 100 students from this time last year, according to MCPS demographer Bruce Crispell.

But the enrollment of Montgomery County students in grades five and below is expected to increase through the 2011-2012 school year, eventually bringing more students to Blair, Crispell said. Lower birthrates in the early 1990s have also caused a decline in student enrollment in grades six through 12.

Ottalini fears that if the population drops too low, Blair's resources may be compromised. Even with the small decrease this year, Blair saw cutbacks in teaching staff and course offerings. Principal Phillip Gainous said that the number of staff positions at Blair has decreased by 12.3 since last year. The administration computes this number by assigning different point values to half-time and full-time teachers and the number of class periods they teach.

Health and physical education resource teacher Cynthia Changuris noticed the impact of the declining population immediately. "I like the fact that the school is smaller. I think it makes things more manageable," Changuris said. "But I don't like that we've had to take a decline in course offerings."

Because of the population decline, three unused portable classrooms were removed the week of Sept. 10 at the request of the county, according to Business Manager Jim Funk.

After Blair's population peaked at 3,298 in 2003, county officials reopened Northwood, beginning with a freshman class and adding a new grade each year. Assistant Principal Linda Wanner said that Northwood has been a major factor in the recent population decrease at Blair. "Northwood is constantly funneling people off," she said.

Next year, when Northwood has all four grades, Crispell anticipates that Blair's enrollment could drop as low as 2,650, below capacity for the first time since 1998, when Blair moved into its current, larger building with a capacity of 2,830. Enrollment increased in the following years, said Crispell, but the Downcounty Consortium (DCC) helped relieve overcrowding by establishing specialized programs within the five member schools.

Ray Scannell, Blair's PTSA representative to the Blair Cluster, said that Blair opened without considering students from the section of Takoma Park formerly in Prince George's County. MCPS also underestimated the number of private school students who would eventually choose to attend Blair and the increase in immigrant families with school-age children in the 1990s.

Marie Mencher. Marie is anxiously thrilled to be on the Silver Chips staff. She is having a sleeplessly great time covering stories with actual relevance, but nonetheless would like a little more time to do the other things she loves, like being assistant drum major of the … More »