The Blair Quiz Bowl team won first place in the Centennial Tournament on Nov. 4. The B-team won first place while the A-team got 5th place and the C-team tied for 8th place with Thomas Jefferson High School. All three teams were ranked in the top 13 and are going onto the Partnership for Academic Competition Excellence (PACE) national tournament in June 2019.

The three teams had a great start in the first half of the tournament, losing no more than one round each the entire morning. In the second half, Blair increased their momentum, and the quiz bowl teams ended up playing against themselves, with a round between the A and B-team, which the B-team won. The B-team ended the tenth round in first place, tied with Thomas Jefferson's C-team. Blair won the tie-breaking round by four points. 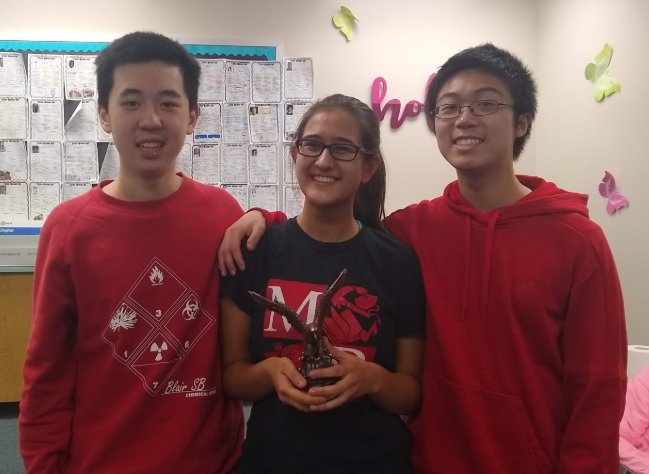 Blair entered three teams in the Centennial Tournament and split up members of the usual A-team between the groups to have a greater chance of getting as many teams to nationals as possible. Blair was not the only school to do this; nearly all schools competing in the tournament entered multiple teams. "A lot of teams decided to split up their really good members among many teams so they could try to qualify more teams," junior Sophia Weng explained. The goal of the tournament was not to win, but simply get teams to go to the nationals. However, Blair ended up both winning the tournament and qualifying all entered teams, fulfilling their goal and getting a little extra for all their hard work.

The team had been preparing for the tournament by practicing at least twice a week and reviewing both paragraph and speed based trivia. The longer formatted trivia was the focus of the preparation for the quiz bowl, as most questions were more about comprehension and less about speed. "It's just been about getting better over time, no one starts amazingly good at this because there's so much information out there to learn, but over time we've all gotten better at both our own specialties and as a team," senior Ian Rackow said.

The ultimate goal for the Quiz Bowl team is to rank highly in the upcoming national tournament this following June. "We're looking to [go to] top 5 or at least [do] as well as we did last year," senior Anson Burns said. The victory of the Centennial Tournament is one more step towards the Quiz Bowl team's final destination.