Blair opened up their second game of the year with a three-run first inning and never looked back, winning 10-0 against a clearly overmatched Rockville squad. Junior Annie Denenberg pitched a shutout for four innings before the game was called due to the mercy rule. Blair improved their record to 2-0 and with another outstanding performance from the entire roster. 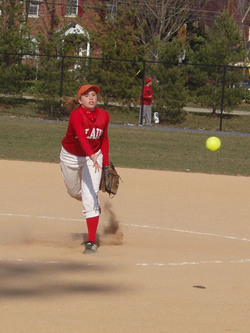 Photo: Junior Annie Denenberg pitched a shutout for four innings during the home game against Rockville on Mar. 23.

Photo: Junior Annie Denenberg pitched a shutout for four innings during the home game against Rockville on Mar. 23.

Today's game highlighted the depth of the Blair line-up. The team lost only one player to graduation from last season's line-up. Coach Louis Hoelman said after the game, "We have an experienced team coming back this year. Everyone worked really hard this off-season. After two practices we already seemed to be at mid-year form."

The team was balanced both defensively and offensively today, showing the depth of a very experienced team. "I am confident that every one of starting players can step up to bat and get a hit, but our bench players can hit as well and play great defense," said Hoelman. Senior co-captain Sarah Rumbaugh echoed this statement, saying, "Our team is so deep, we really don't have any starting or bench players. Everyone can play."

Blair did show some improvement today over their effort yesterday versus Blake. "Last game against Blake, we played horrible defensively; we gave up three earned runs. Today everyone stepped it up," said Hoelman.

During one play senior outfielder Sarah Rumbaugh ran to cut off a long fly by Rockville. Rumbaugh threw a bullet to junior Anna Szapiro who was able to turn around quickly and throw the ball to fellow junior Juliet Garlow, who tagged the runner out at third. Hoelman said that the play "was one the best I have ever seen during all of my years of coaching. All of our practice has made plays like that much easier." Blair tagged out three of the four Rockville players who reached base, preventing a single opposing player from making it safely to third.

Blair's pitching was excellent tonight as well. Denenberg was on target all night, walking zero batters and allowing only four hits. In the third inning the Rockville pitcher walked two Blazers, hit one, and allowed another to steal first on a wild third strike. "She was able to hit all of her spots today, and get ahead in the count. That kept opposing batters on their toes the whole game," said Hoelman.

Offensively the team has also come together to replace their most dominant offensive force from last year, Emily O'Brien, who left due to graduation. "Claire Lieberman has been in a zone the entire year, hitting the ball hard. Sarah Rumbaugh has reached base on six of her first eight at bats. That's amazing," said Hoelman

This game highlighted a radical shift in the team mindset from last year. "When we played Rockville last year we played down to their level and only won 3-1. This season we want to play every game at the same level," said co-captain Rumbaugh. Rumbaugh thought that this was one of the main problems leading to Blair's first round exit in last year's playoffs.

The entire team hopes for a better outcome this year. "I think there is always room for improvement. I really hope that we can as good a record as last year and make it farther in the playoffs," said junior catcher Claire Lieberman.

Thanks to Team Manager Aaron Sacks for providing statistical information.