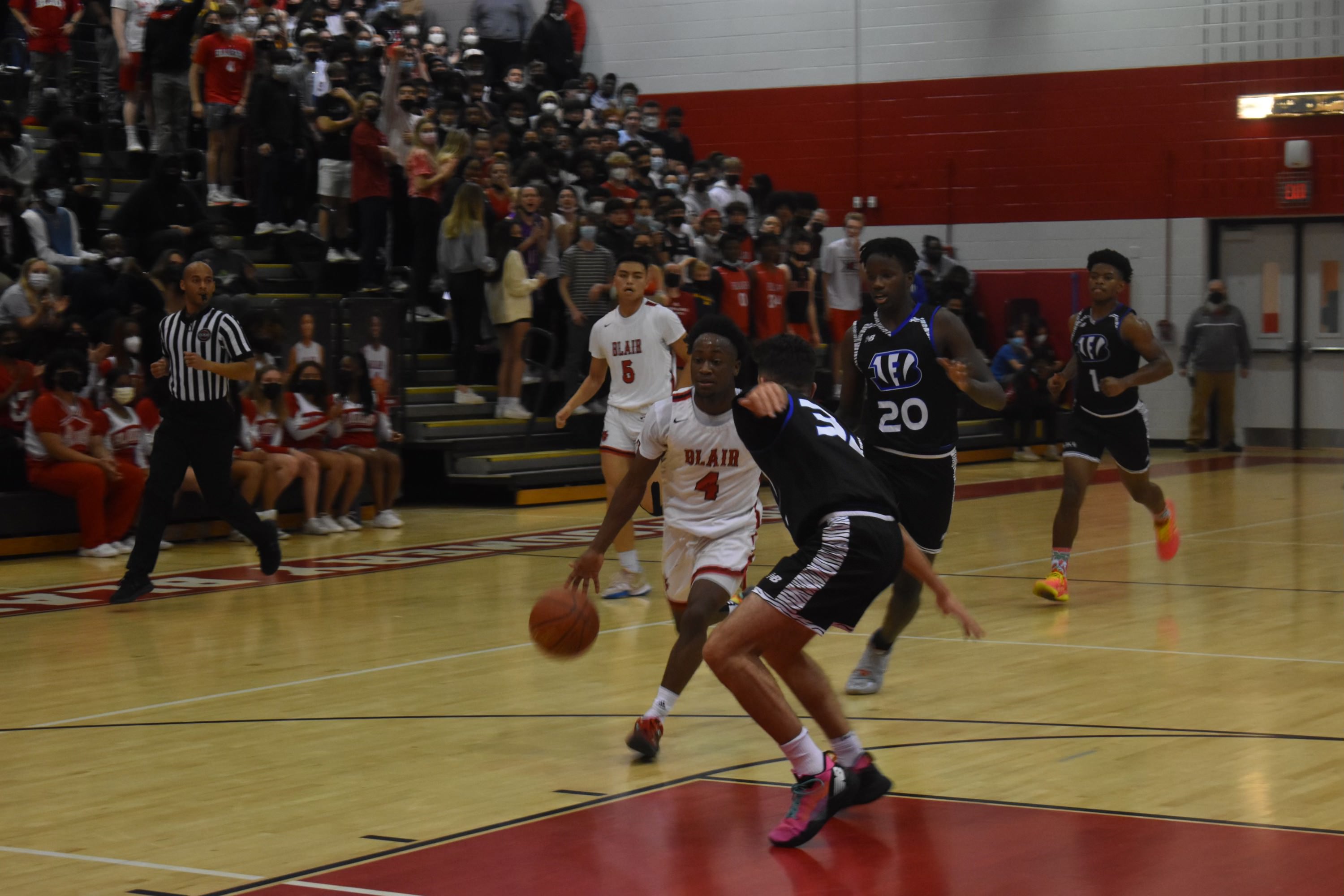 Senior point guard Muller Torontow drives to the hoop against Blake in the regional championship on March 2, 2022

Photo: Senior point guard Muller Torontow drives to the hoop against Blake in the regional championship on March 2, 2022

Photo: Senior point guard Muller Torontow drives to the hoop against Blake in the regional championship on March 2, 2022 Photo courtesy of Mollie Block.

On March 2, the Blazers absolutely crushed the Blake Bengals with a score of 74-52, handing Blair their well-deserved regional championship title.

In a similar fashion to almost every game of their season, the Blazers came into the game with a soft touch and could not miss. Captain Muller Torontow, junior guard Eli Greenberger and senior forward Gio Moore all contributed their own threes within the early minutes of the quarter.

Blair’s defensive effort was commendable to say the least. They locked down the Bengals so well they were only able to score one easy layup and a couple of free throws throughout the entire quarter.Blake scored a mere seven points while Blair managed to put up 24 points of their own.

The Blazers decided to showcase their polished handles throughout the second quarter. Senior forward Johnathan Pang pulled off a stellar stepback into a high arcing three over a fallen Bengal player. Not even 6 minutes into the 2nd quarter, Blair was up by 24 points and had already scored 40 points.

On top of the shooting barrage, Blair was moving the ball extremely well and not forcing contested shots. Tornotow pulled off a Magic Johnson-esque no-look pass into the paint for an easy layup by senior guard Christopher Owens.

The Bengals were stunned by Blair’s outstanding play, so much so that they began to make silly mistakes. They continued their struggle into the end of the half with two consecutive turnovers and two missed wide-open layups.

The second half was even further from competitive. Everything Blair had going for them in the first half - threes, defense, and excellent passing - was on display in the second. The only run Blake put up the entire game was during the first two minutes of the third quarter. Blake hit several easy layups after Blair repeatedly turned the ball over on offense, so Coach Mensah called a timeout 1:47 in. The Blazers quickly reset and settled back into a rhythm of baskets and defensive stops.

Continuing their success in the first half, Blair’s long-range effort carried them in the third. Pang, Moore, Greenberger, Torontow and Senior guard Ryan Emah all hit threes. Blair’s lead was unwavering.

Throughout the fourth quarter, all eyes were glued to the clock. As usual, Blair’s huge 20-point lead was uncontested. Blazer shots were falling left and right. Blake was turning the ball over repeatedly.

In a seemingly nightly routine, Coach Mensah acknowledged the huge lead with a minute left in the game and subbed in the bench. The fans grew louder and louder as the seconds ticked off the clock. With 20 seconds left, Blair's PA announcer turned on the mic and announced Blair as the 2022 regional champions, triggering a roar from the packed crowd. As the horn sounded, the players sprinted on the court, jumped into the student section, and soaked in another dominant playoff victory.

Blair’s next game is the state quarterfinals tonight at 6pm at Eleanor Roosevelt High School. Tickets are already sold out.