After winning the faceoff, the Blazers found themselves evenly matched with the Trojans. The game was, for the most part, a constant back and forth, with Blair taking possession and scoring only to have their scores quickly matched.

Blair took the lead early on, scoring two goals in the first minutes of the game, even when down a player due to a penalty. However, Gaithersburg took possession and made two goals almost immediately after the next faceoff, tying the score at 2-2. 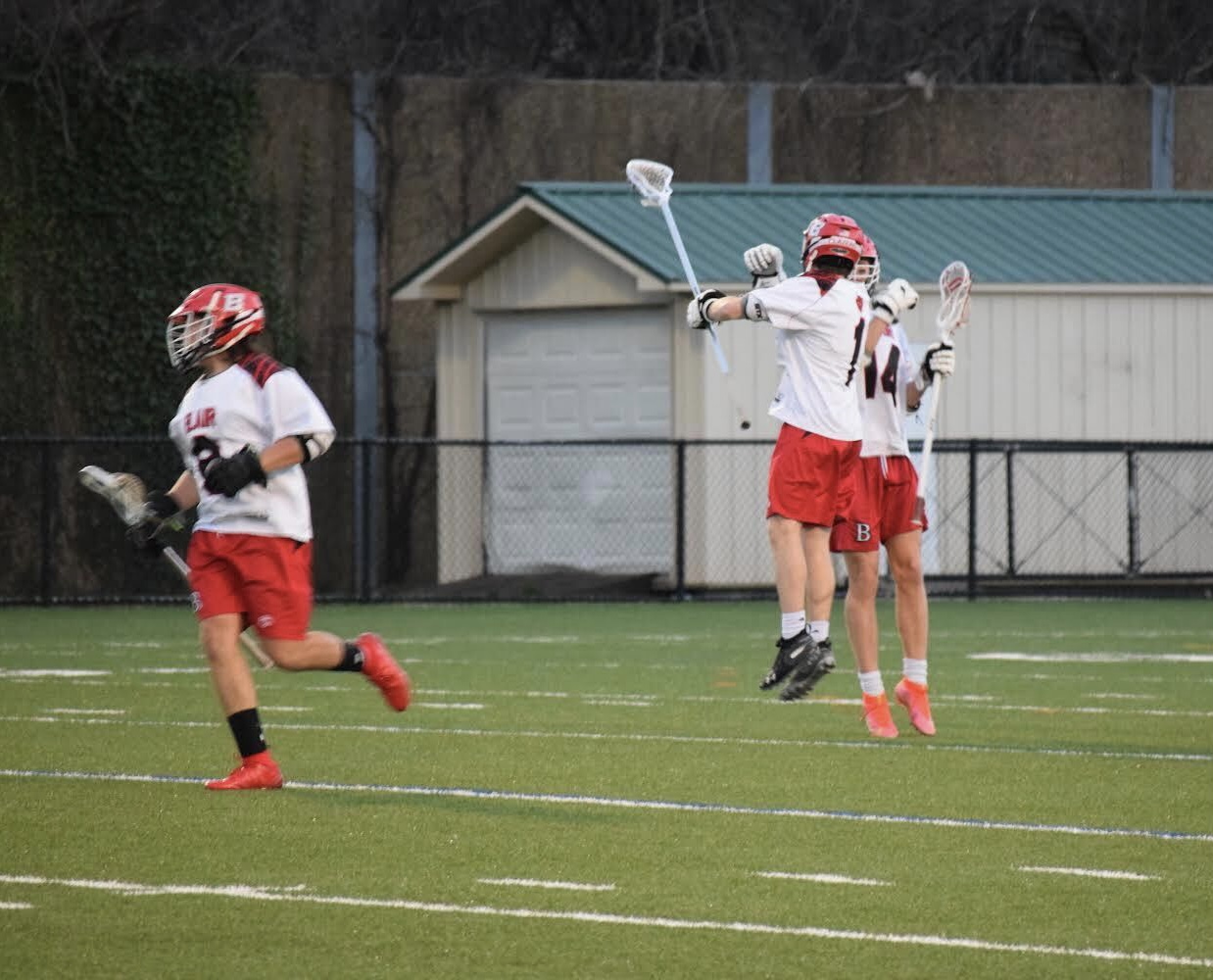 Photo: Members of the team celebrate after scoring

Photo: Members of the team celebrate after scoring Photo courtesy of Gigi Segal.

With the score tied, the Blazers kept the ball on the opposing side of the field, not taking any shots but keeping the ball away from Gaithersburg. As they circled the goal, the JV team watched from the sidelines, cheering the team on and shouting encouragement. Parents huddled under blankets, refusing to let the cold weather stop them from showing their support.

At the end of the quarter, Gaithersburg made two quick passes and shots, taking the lead at 2-4.

Blair struggled a bit in the second quarter, but their attackmen were relentless, keeping the ball on the opposing side for a good portion of the quarter. About halfway through, Blair called a timeout to regroup and proceeded to make 4 goals, taking the lead. With less than 5 seconds left in the half, Gaithersburg brought the ball down the field and took a shot, which was blocked by Blair’s goalie.

Through the third quarter, Gaithersburg matched Blair’s every move. Gaithersburg broke out, completed a pass and scored, nearly closing the score gap. Blair kept their one-point lead throughout the quarter while maneuvering around the opposing goal to find openings.

Gaithersburg lost a player to a slashing penalty and Blair got the advantage. While man-up, Blair scored again. Gaithersburg gained a little bit of momentum after intercepting a Blair pass, but the quarter ended before they could turn it into something offensively.

In the final quarter, Blair continued increasing their lead. Gaithersburg grew increasingly frustrated and their playing style grew more frantic as the game drew to a close. Blair’s lead grew until it was safe to stop attacking and focused more on keeping the ball out of Gaithersburg’s possession for the rest of the quarter. The game concluded with a final score of 13-7, making this Blair’s second win of the season.

“The game went great. It was our second win and we played well. We had a rough second quarter, but we played well in the second half,” said freshman Westen Paschane. “We’re going to keep getting better and hopefully make it to the playoffs,” Paschane said.