On July 15, Jack Naden, a 2011 Blair graduate, and senior John Rose were named the High School Group winners of the Student Electronic Music Composition Talent Search for their entry, "The Song for Paris." The competition was sponsored by the National Association for Music Education (MENC) and the National School Board Association (NSBA). 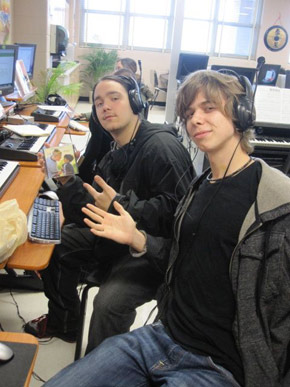 The NSBA Student Electronic Composition Talent Search recognizes both individual and group talent. The competition's website stated that the entries were based on "aesthetic quality, effective use of electronic media, and the power of the composition and its presentation in communicating to school board members, administrators, and others," three areas in which "The Song for Paris" excelled.

This year, the NSBA received entries from contestants all over the country. "John and Jack were up against six entries for the Group Winner title," Member Engagement Manager of the MENC Susan Lambert said. "All entries were very competitive and coming from states like New York, Virginia, Connecticut and Maryland."

The talent search is not only used to recognize young musicians, but also to encourage the winners' schools to improve their music systems. "I would like the school to produce more student-produced shows at the school for talented Blair artists," Rose said. "I also want the music department to appreciate hip hop more."

Rose is an example of what Lambert would like to see in her winners. "The talent search is used to show the important of having music technology," she said. "There are students with an outstanding amount of talent that need to be recognized, and this is what our yearly talent search does for them."

Naden and Rose dedicated "The Song for Paris" to Paris Essoumba, a Blair student who passed away about two years ago. "I chose to dedicate the song to Paris because he was a music partner and a great friend of mine,” Rose said. "The Song for Paris" is a three minute and thirty second rap about the effects of Essoumba's passing. Naden produced the composition and Rose was the primary songwriter and rapper. Malaika Newman, another 2011 Blair graduate, sung the rap's chorus.

Rose has been inspired by the win. "Winning this competition made me truly realize that I have a gift and motivated me to keep making music,” Rose said.