Resources will be available this week for grieving students

Blair senior Paris Essoumba committed suicide Monday evening at his home in Silver Spring. He was 17 years old. Crisis management teams will be available this week to help students and staff cope with the news of his death, according to Acting Principal Myriam Rogers. 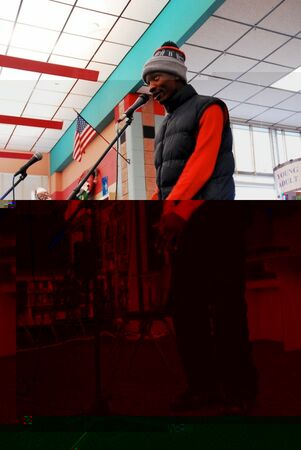 Second period teachers read a message to classes on Tuesday morning informing students of Essoumba's death. Rogers did not have any specific information as to why Essoumba took his own life. "People describe him as a very happy person," she said. "It kind of came out of nowhere." News of Essoumba's death was first made public on Facebook on Monday.

Counselors followed Essoumba's schedule to be present for students in those classes, according to Rogers. Psychologists, Blair counselors, counselors from local schools and pupil personnel workers from Montgomery County Public Schools were also available on Tuesday to provide grief support.

Essoumba was a member of the varsity football team and the hip-hop group Those Guys. An avid rapper, he regularly performed at SGR Spectacular and Silver Quill open mic events. "His mom described that he would spend hours at his friend's recording studio," Rogers said.

Essoumba's friends described him as a lover of poetry and music whose sense of humor made him stand out in a crowd. "He always made me laugh," senior Imani Pierre said. "We'd exchange big cute smiles back and forth in the hallways."

Blair alumnus Carlos Arana, who met Essoumba two years ago, said Essoumba was one of the most talented musicians he knows. "Towards junior and senior year, he became a quiet person, and very chill and not like he used to be - except when he jumped on the mic," Arana said. "It's like he was a completely different person when he touched that mic."

Essoumba's teachers, including English resource teacher Vickie Adamson, also noticed the change in his demeanor. "I think there was a Paris who was vibrant and energetic and who had a great command of words, but I think there was another Paris who was different," Adamson said. "I just regret that we weren't able to help him more."

The SGA is planning a Freestyle Friday to pay tribute to Essoumba's love for music, according to SGA President Alex Bae. The SGA will also be collecting donations throughout the week to help Essoumba's family with the cost of his funeral.

Photo:
In addition, Blair's administration has posted three large banners - two near the SAC and another near the main staircase - to allow students an opportunity to send a message to Essoumba's family.

Essoumba's death marks the third time in the past two years that a Blair student has died. In November 2008, freshman Tai Lam was shot and killed on a Montgomery County RideOn bus and in April 2009, freshman Astride Avoume-Memine died due to complications from a seizure. Rogers hopes that the Blair community can once again come together in the face of this tragedy. "It is a devastating loss to the Blair community, but we need to stay strong," she said.

Rogers is helping the Essoumba family reach out to the Blair community to raise funds for funeral expenses. Checks can be made payable to Montgomery Blair High School with the memo P. Essoumba.

Essoumba's funeral will be held on Monday, Feb. 8 at the Community of Washington D.C. Church on 1225 R Street N.W. The viewing will take place from 10 a.m. - 12 p.m. and services will occur from 12 p.m. - 1:30 p.m. Students who wish to attend the funeral services on Monday must submit a note from a parent or guardian to the attendance office.

If you need support or guidance after school hours, the Montgomery County Crisis Center is available 24 hours a day at 240-777-4000.